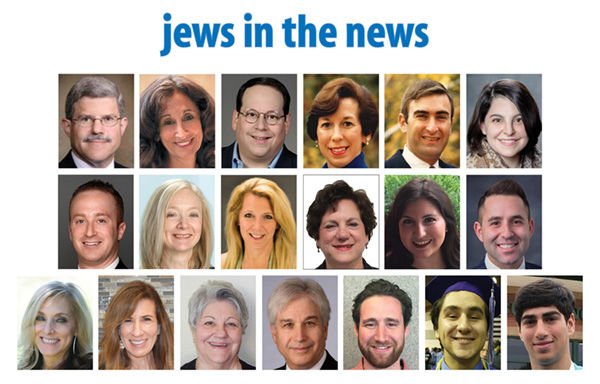 Robert D. Litz has been reappointed chairman of the Alternative Dispute Resolution Committee of the Bar Association of Metropolitan St. Louis. Litz is president of United States Arbitration & Mediation and serves on the Mediator and Senior Arbitrator panels. He is a member of Congregation Temple Israel.

Rabbi Susan Talve and Central Reform Congregation will be honored Aug. 19 as the Faith Community Hero at the Salvation Army’s Doing the Most Good Awards luncheon in the Khorassan Ballroom of the Chase Park Plaza. She has led her congregation in promoting radical inclusivity by developing ongoing relationships.

Former St. Louisan Craig Cohen and his team of producers have received the Public Radio News Directors Inc. (PRNDI) national award for Best News/Public Affairs Program. Cohen is the host and executive producer of Houston Matters, a news/public affairs radio show that airs daily in Houston. His show was also recognized with a third place Lone Star Award in the Radio Talk Show category by the Houston Press Club.

Marilyn and Ken Steinback will receive the Harris Frank Community Service Award at Congregation Shaare Emeth’s Heart & Soul Gala, Happily Ever Laughter, on Sept. 11. This award recognizes congregants who inspire lives and change their communities for the better. Sharon Greenberg, Stefanie and Tod Greenberg, and Dan and Darcy Glidewell and their families will also be honored with the L’dor Va’dor Award. This goes to families whose dedication and commitment to Shaare Emeth has continued for multiple generations.

Katie Garland has been promoted to social service manager at Crown Center. Garland’s responsibilities include coordinating with residents, families, colleagues and community professionals to provide information and referrals, case management, advocacy and counseling.Additional responsibilities include evaluation, supervision and development of the graduate student intern program. Garland is a member of Shaare Emeth.

Ben Cherry has been promoted to president of Manor Real Estate. A member of Congregation United Hebrew, he was recently on HGTV’s “House Hunters”   representing the buyers in their purchase of a new home.

Gail Appleson, communications editor at Armstrong Teasdale, has been honored by Missouri Lawyers Weekly as one of its 21 Unsung Legal Heroes. This award was established to honor law firm employees who have consistently gone above and beyond the call of duty, often behind the scenes. Appleson is a member of Kol Rinah.

Sharon Greenstein-Gorman has opened Certified Care Management LLC. Older adults and those with ongoing health challenges will receive individual support in making health, wealth and legal decisions that affect their lives, including ongoing advocacy and management care needs.A member of Shaare Emeth, Greenstein-Gorman is a certified geriatric care manager with more than 10 years’ experience in the field of senior care and family advocacy.

Weekends Only Furniture & Mattress welcomes Judy Abrams as chief financial officer. Her key responsibilities include directing the company’s financial review process, planning financial models and analysis, identifying resources for expansion, and managing the financing and accounting staff.  She is integral in maintaining banking relationships and overseeing income tax filings and the annual external audit. Abrams is a member of Congregation B’nai Amoona.

Becca Levine, a recent graduate of the University of Kansas, is an Israel engagement associate at the University of Delaware Hillel Kristol Center for Jewish Life. She will also join a group of other Jewish professionals from across the country in an immersive and leadership training program as a Birthright Israel Fellow for 2016-17.

Diane Schuch has joined Crown Center for Senior Living as a social service coordinator. Her responsibilities include coordinating the daily operations and administrative support for the kosher meal site dinner program.

Merritt Mamroth has joined Midland States Bank as a commercial relationship manager. He is responsible for managing and growing relationships with existing clients, as well as leading new business development activities in the St. Louis metro area. Mamroth is a member of Agudas Israel of St. Louis and B’nai Amoona.

Former St. Louisan Jonathan Eisen has been named to the fifth-annual “Double Chai in the Chi: 36 Under 36” list of young Jewish movers and shakers in Chicago. Through his work atOneTable, an organization dedicated to bringing young Jews together for Shabbat dinner through meal subsidies, Eisen, 28, seamlessly combines his passion for good food and good friends, helping to build a more dynamic Jewish Chicago one Friday night dinner at a time. In just a year, he has helped OneTable grow from a handful of diners a week to more than 70.

Parkway North High School graduates Noah Hartman and Daniel Lev are among 16 local winners of National Merit Scholarships. Each will receive $500 to  $2,000 annually for up to four years of undergraduate study. Noah is the son of Central Reform Congregation members Margie and Brad Hartman. He will be attending the University of Alabama in the fall to study business and history. Daniel, son of Michal and Ronan Lev, will attend Stony Brook University to study math. His family attends B’nai Amoona.