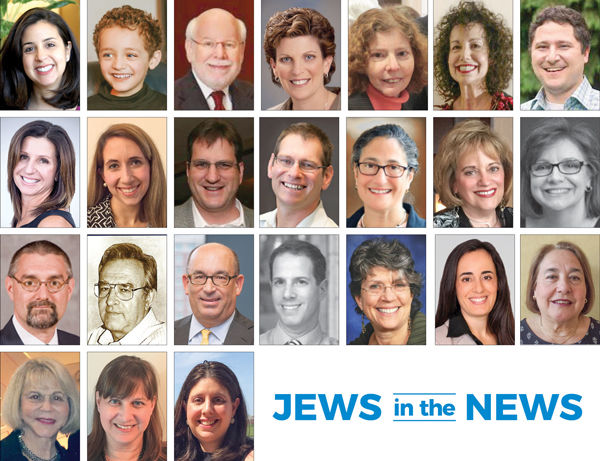 Shira Kraft will become the director of Nishmah: The St. Louis Jewish Women’s Project beginning mid-September. A member of Kol Rinah, she was the J’s Jewish Arts & Soul Project coordinator.

Seven year old, Yosef (Joey) Granillo, a 4th grader at PEGS (The St. Louis Regional Program for Exceptionally Gifted Students), was a national winner at three 2017 competitions, Math Kangaroo, Continental Mathematics League and National Language Arts League. He received a $100 merit scholarship to help support private violin lessons by the Alton Youth Symphony, where he is concertmaster in the Jr. Youth Symphony and part of the Jr. Chamber Group. Joey is the son of Carole and Tony Granillo and attends Kol Rinah.

Attorney Leonard Frankel has been elected board president of the Interfaith Partnership of Greater St. Louis for 2017-2019.  The non-profit interfaith group brings together both clergy and laypersons of nearly 30 diverse faiths for dialogue, celebration, service, pursuit of social justice, and increased understanding of one another. Frankel is a partner in the firm of Frankel, Rubin, Klein, Dubin, Siegel & Payne, P.C. and is a member of Congregation B’nai Amoona.

The newest member of the Nishmah team is Debbi Braunstein. She is the Sharsheret’s support co-coordinator working along side Lynne Palan. Her responsibilities include reaching out to medical centers and congregations to grow Sharsheret’s prescence in the St. Louis community. Braunstein attends B’nai Amoona.

Gail Wechsler is the new library director at the Law Library Association of St. Louis.  The library, one of the oldest west of the Mississippi, is a public law library serving the needs of the general public, students and members of the legal community and is located in the Civil Courts Building in downtown St. Louis.  Wechsler is a member of Central Reform Congregation.

For stories published in the St. Louis Jewish Light’s Oy! Magazine, journalist Susan Fadem won first prize nationally, in the religion category, in the National Federation of Press Women’s Comunications Contest.  Her stories were about a nonagenarian who needlepointed tallit bags for her five great-grandchildren, with instructions to use them first for their bar and bat mitzvahs; and about Anna and Sol Guber, whose Yizchor book, detailed the lives of her parents and other residents prior to the Holocaust and in their Jewish community in Poland. She also received an honorable mention for her story in Oy!  about Gene Liss landscaping his multi-acre farmhouse spread in House Springs, Mo.

Former St. Louisan, Sandy Weintraub, assumes the presidency of the Jewish Federation of Lane County in Oregon. He currently serves as the director of Student Conduct and Community Standards at the University of Oregon.

Steve Malter, a member of United Hebrew is the new senior associate dean and director of the undergraduate programs at the Olin Business School at Washington University. He will also oversee the Center for Experiential Learning and the Weston Career Center.  Ohad Kadan is now the associate dean for Global Degree Programs at Olin. In this new role, he will provide academic and administrative oversight to the growing number of international programs. Kadan is also a professor of finance.

Physician-scientist, Robyn S. Klein, has been named vice provost and associate dean for graduate education for the Division of Biology & Biomedical Sciences at Washington University. Klein, who will begin her new post Jan. 1, is the founding director of the university’s Center for Neuroimmun-ology and Neuroinfectious Diseases.

Linda Nissenbaum, manager of the Access Office, Disability Support Services at St. Louis Community College – Meramec, has been appointed to the board of directors for the Association on Higher Education and Disability (AHEAD). She is the only community college representative serving on the board and will serve a three-year term.

Jean Millner was appointed to serve the remaining term of the vacated seat on the Monarch Fire Protection District board of directors. A member of Congregation Shaare Emeth, Millner is the food service director at the [email protected] Café and Catering at the Crown Center for Senior Living.

Bill Bruns received the 2017 Southern Illinois University’s Lindell W. Sturgis Memorial Public Service Award for his community service and volunteerism. He is the deputy director for the Student Center at SIU, Carbondale. A member of Congregation Beth Jacob in Carbondale, Ill., Bruns is the immediate past president of the Jewish Federation of Southern Illinois, Southeast Missouri and Western Kentucky.

St. Louisan Feliks Levin, who initially came to the United States from the former U.S.S.R., published his new book, “Golden Names.” Written in Russian, the book is about the most famous scientists and prominent figures who lived in the U.S.S.R. and Russia between 1950 and current times. It includes Levin’s personal meetings and in-depth analysis of the last 60 years of political and economic development. For more information email [email protected]

Carolyn Furfine, a long-time member of the Barnes-Jewish Patient Safety and Quality Committee as a community advisor, is now serving on the hospital’s Grievance Committee. In this role, she will help to ensure that excellent care is given to all patients and that best practices are put into place where there are areas for opportunity. Furfine attends Shaare Emeth.

Give Kids A Smile has named Erica Steen as its new executive director. In her new role she will lead the non-profit, which is known for providing more than 15,400 local underserved children with $8.6 million worth of free comprehensive dental services since 2002, and serve as the catalyst for a nationwide program by the same name that has provided care to 5.5 million kids.

Jessica Wax is the new activity engagement manager at Covenant Place.  Her responsibilities include planning programs for the residents and Jewish community at large as well as working with community volunteers to help with programming and entertainment. Wax is a member of Kol Rinah.