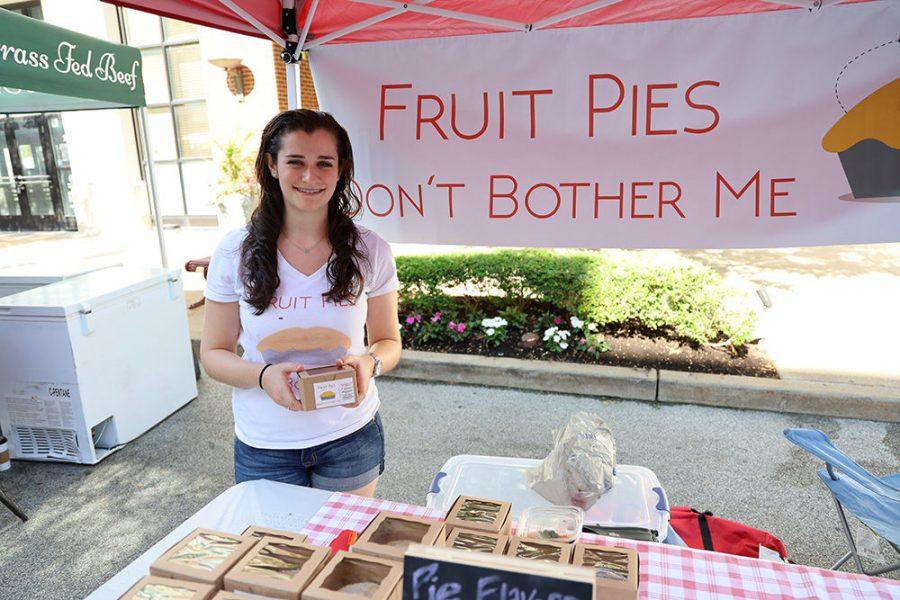 Farmers markets abound in the St. Louis area. More than a dozen operate each week, ranging from small operations such as  the Sunday Boulevard Farmers Market across from the Galleria to sprawling markets such as the Saturday Tower Grove Park extravaganza.

Farmers markets are thriving nationwide, too. The U.S. Department of Agriculture reports that the number of markets has grown to more than 8,600 from about 2,000 in 1994.

In St. Louis, several Jewish vendors regularly sell their wares. They include Such and Such Farm (see related story), which sells at the Schlafly Bottleworks Farmers Market, and Crispy Edge Pot Stickers, which has a stand at the Tower Grove Farmer’s Market.

Carly Krainen, who sells pies at Boulevard Farmers Market,  found a food and cooking connection at a young age from her grandmother, Marilyn.

“I’ve been baking for a dozen years,” said Krainen, 25. “Mostly I bake pies, and it comes from my grandmother’s recipe. She passed away two years ago, and now I’m carrying on her tradition.”

Krainen’s day job is at Dell, where she is a supplier diversity adviser (cultivating business relationships with women- and minority-owned companies). However, her hobby and passion takes her into the kitchen. Earlier this summer, she began baking and selling her pies at the Boulevard market. She goes by the business name “Fruit Pies Don’t Bother Me.”

“I like the phrase ‘Shoo fly, don’t bother me’and figured fruit pies are better than fruit flies, so I combined the two,” she said.

Krainen’s grandmother’s recipe is for apple pie, which she sells along with four other fruit variations. She offers both full-size pies and mini versions. She said the idea of carrying on her grandmother’s pie-baking tradition evolved.

“I initially was thinking that I was only going to use her recipe for family events or for special occasions,” Krainen said. “Then I thought about it and figured why not share the love.”

She still bakes for relatives when she’s visiting her hometown in West Bloomfield, Mich., but Krainen is developing a following at the Boulevard Farmer’s Market, too.

“I’ve been doing 50 or 60 sales each time I come out here,” she said. “I’m going to continue selling pies at the market, but I’m also looking into a shared kitchen or commercial space because I’m thinking about expanding and doing weddings, bar and bat mitzvahs, and other events.”

If you’re serving a warm apple pie to guests, a great accompaniment is a vase of fresh-cut flowers. They also have a health benefit. A study published last year by the University of North Florida Department of Public Health claims adding blooms to a home can help relieve stress, boost energy, and encourage creativity and compassion.

Getting fresh flowers grown in the United States is not that simple. Flowers from most supermarkets are usually imported and were cut days or weeks earlier. That means they were also preserved with chemicals and picked by low-paid workers exposed to pesticides.

Domestic flower growers are rare, but eastern Missouri boasts one with a solid reputation: Flower Hill Farm. The 35-acre farm is located in Beaufort and is owned by the married team of Vicki Lander and Jack Oglander. Their lives revolve around caring for the soil and grounds where they grow rows upon rows of flowers. They also consider it their mission to respect the land and its bounty.

That includes being chemical-free. Flower Hill Farm is also a pollinator sanctuary, a space where bees are safe and can thrive.

Lander and Oglander love the peace and quiet of the farm, but their inspiration comes from a desire to protect endangered species — plants, animals or insects. They acquired the farm in 2011 and began growing flowers the following year. It had the perfect combination of elements, including a greenhouse and pond. It was also chemical-free.

The couple farm about two acres of the total property. In addition to flowers, they raise fruits and vegetables that they donate or sell to St. Louis-area chefs. On a recent Friday evening, Lander and Oglander loaded up their car with fresh  flowers and delivered them to Central Reform Congregation for the monthly Tot Shabbat gathering. After getting the plants in place, they plopped down on the floor with the other CRC congregants.

Before she got into agriculture, Lander worked as a massage therapist and yoga instructor.

“I have a degree in social work, but I went on to do massage work in Boulder,”she said. “I also have a degree in Hakomi, which is a Buddhist and Taoist form of body-centered psychotherapy. In 1998, I got a yoga certification and did movement and body work.”

The couple came to farming with a good knowledge of agriculture. Lander is a master gardener and served as farm manager of the EarthDance Organic Farm School in Ferguson. In 1970 and 1971, Oglander spent summers at the Shaw Arboretum (now the Shaw Nature Reserve).

“The mission we had was to develop a model organic farm,” he said. “I kind of always had in the back of my mind that I always wanted to live in a nonurban setting, and when Vicki and I met in 2001, that became part of our conversation early on.”

Oglander, 69, was a businessman for most of his career, working in the printing and direct-mail industry. He has always had a knack for problem solving, and that continues to serve him well on the farm.

“It’s addressing a challenge,” he said. “Here’s a problem that needs to be solved, and it’s not just figuring out a solution, which is the easy part, but the physical part of being involved in the solution as well.”

For Lander, the reward is just being able to commune with nature.

“I like to be in nature and I like growing things,” she said. “I love soil and interacting with nature and I get to be outside at great times of the day. It’s beautiful.”

Such and Such Farm

Hours: 4 to 7 p.m. Wednesdays through October

Owner: David Dresner, a local entrepreneur and restaurateur who learned how to make the Asian treats from his beloved grandfather. Read the Jewish Light’s 2018 story on Dresner at  http://bit.ly/David-Dresner.