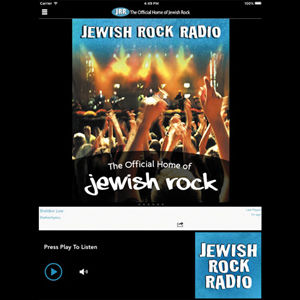 by Bill Motchan, Special to the Jewish Light

Every Friday evening, thousands of Jewish families around the world follow a familiar routine. From St. Louis to Nashville to Tel Aviv to Sydney, their pre-Shabbat activities include setting out candles, preparing dinner and tuning in to Jewish Rock Radio.

The internet-based streaming radio app is extremely popular throughout the week as well, now exceeding 1,500,000 listening minutes per month. Since the COVID-19 pandemic has confined millions of people to their homes, Jewish Rock Radio has become even more significant with streaming volume increasing each week.

And on April 30, Jewish Rock Radio took another step into virtual community building with St. Louis Jewish Community Flagpole. The new initiative, with support from the Jewish Federation of St. Louis and the Staenberg Family Foundation, is a weekly online gathering of solidary and song. We may not be gathering in person, but technology offers a safe, sheltering-at-home alternative.

Even before the pandemic several thousand listeners tuned in every day and more than 100,000 people have downloaded the Jewish Rock Radio app.

In 2020, Jewish Rock Radio celebrates its 10-year anniversary. That milestone is just one of many the innovative platform has achieved, said executive director Rick Recht.

“There are milestones that occurred early on with the broadcast, like the growth of listening minutes, developing a Facebook following and apps downloaded,” said Recht, 49. “I am proud of those, but wherever I go in this country or internationally, people share stories with me about how Jewish Rock Radio is an integral part of their lives, during their drive to work, or the time they spend with their children or how they start Shabbat each week. So the part of the Jewish Rock Radio trajectory that makes me most proud is the cultivation of a Jewish music community.”

Jewish Rock Radio began as a concept to develop a strong field of Jewish music and generate both an international audience and a vibrant, growing Jewish artist community. Recht had been participating in an interfaith initiative and was inspired by the work of Rabbi Micah Greenstein from Temple Israel in Memphis, Tenn. He also met Christian leaders and immediately recognized the power of Christian music and streaming media to connect with an audience.

“I asked myself, ‘What could I do that I’m passionate about and that could fill a need in the Jewish world?’ ” Recht said. “And looking around I saw a real need for a mass communications channel, a way for people to connect with each other and a way for Jewish music to inspire the masses. It was clear to me that what the Christian world was doing to motivate and connect their younger audience was something that the Jewish world should be doing, and I knew we could do that.”

The answer was a streaming radio station. Thanks to the internet, smartphones and technological tools, streaming radio and podcasts have grown by leaps and bounds. Nearly 67% of Americans age 12 and above listened to online radio in December 2019, according to a Pew Research Center study. By contrast, 10 years ago, 27% of that group listened online. For a broadcast startup with limited resources, streaming radio offers an affordable cost of entry. There’s no tower to build, and no satellite to launch.

Jewish Rock Radio’s genesis can be traced to a small advisory team of like-minded people who met in a Chicago living room in 2008. As a touring musician, Recht knew the music business. He quickly found that fundraising and running a nonprofit would be essential skills.

“Building the networks, relationships and an organization – these responsibilities of starting and running a business were very familiar to me, as familiar as playing a guitar and singing,” he said. “Running a nonprofit and fundraising, however, were new, unique skill sets – definitely a new challenge for me and really fascinating.”

The growth of Jewish Rock Radio can be traced to three key stages. The first one was creating a Jewish artist community and a system to support and promote the artists. Jewish artists have the potential to be powerful, relevant and effective Jewish leaders and educators, Recht said. They can also strengthen Jewish identity and engagement among listeners.

Prior to Jewish Rock Radio, singer-songwriters who specialized in Jewish themes were scarce. Now there are dozens of nationally touring Jewish artists. The original mission of Jewish Rock Radio to introduce up-and-coming artists continues. One of the station’s popular programs is “Emerging Artist Showcase” hosted by the Jewish artist Joe Buchanan.

“We highlight new artists and music from all over the United States and all over the world,” said Buchanan, 42. “There are a lot of people making new Jewish music, and there’s some amazing stuff coming out, so we try to give them a platform.”

One of the first emerging artists featured on Jewish Rock Radio was Rabbi Josh Warshawsky, now a featured artist with a show of his own.

“Jewish Rock Radio has encouraged tens if not hundreds of people to start thinking about their own Jewish songwriting,” said Warshawsky, 29. “A lot of that is because now there is a platform, there is airplay to get their work out there. Rick gave me a forum with a show called ‘Musical Midrash.’ That allowed me to build relationships with other artists and talk about the meaning of the songs in a way that could only happen in a radio station like this, so that was awesome.”

Another Jewish Rock Radio show, called “Jewish Women Rock,” is in its fourth year and is hosted by Naomi Less. She was one of the station’s first national Jewish recording artists to come on board.

“I do a lot of work with uplifting and amplifying women’s voices in the field, and Rick allowed me to have a platform for that,” said Less, 46. “I’m proud that Jewish Rock Radio was willing to do that and super honored that they allowed me to work on this. ‘Jewish Women Rock’ does an enormous amount to say to the field, ‘Hey, we need to build a listening audience for women.’ That hasn’t always been the case in the Jewish music field or the secular music field.”

Jewish Rock Radio records and broadcasts the concerts on Facebook and attracts tens of thousands of viewers. The concerts offer Jewish artists a virtual venue to build a new fan base and collaborate with other talented singer-songwriters in their local communities. The format positions a group of eight to 20 singers sitting on stage, singing together in front of local audiences.

The positive response to the concerts last year led to a full schedule planned this year, although the novel coronavirus pandemic has put concert plans on hold. However, JRR Live Across America already featured four concerts in Chicago over the past year that have transformed the Jewish music scene in there, Recht said. The concerts pulled together more than 25 Chicago-area artists representing 15 congregations. Those rabbis, cantors and Jewish musical artists joined together on stage to celebrate their common bond through song.

Another wildly successful Jewish Rock Radio development program is the Jewish Star competition. The initiative, in its second year, is designed to advance the development of young Jewish artists, showcase their talent and advance their Jewish leadership skills. Contestants submit a music video featuring a Jewish song and their vision about having an impact on the Jewish community through music.

Mentoring Is the Key to Growth

Perhaps the boldest and most significant future-thinking initiative developed by Jewish Rock Radio is its mentoring program. This represents the third stage of the radio station’s mission. The music business is tough and competitive. It’s easy for a young artist to get discouraged. To address these challenges, Jewish Rock Radio created a support system to help the next generation of Jewish artists achieve their goals. It began with Jewish Star, which is a competition but one whereby  everyone wins.

“The goal of Stage 3 is to attract, identify and support new talent,” Recht said. “That talent comes from teens and young adults who want to use Jewish music to impact the Jewish world and serve as a vehicle for their leadership in the Jewish world. It also creates a framework and opportunities for established Jewish artists to create give back to new generations.”

While Jewish Star is a competition, Recht says, it is actually an opportunity to identify, attract and support young Jewish musical artists. Jewish Star Academy handles the support part of that mission. Its monthly webinars delve into the intricacies of being a leader in Jewish life and building a career in music. In February, Buchanan conducted a webinar on branding, marketing and self-promotion. This month, singer and composer Eliana Light’s webinar delves into worship leading.

The most recent Jewish Rock Radio initiative is an extension of the talent development pioneered by Jewish Star Academy. It is a more robust and expansive form of mentoring.

“Right now, we’re piloting the Jewish Academy Mentoring Program,” Recht said. “We have 18 mentees and six mentors. They meet monthly in mentoring circles. It’s all virtual, and it’s all formal. They have set agendas. The mentors and mentees have to prepare materials, and they have a set amount of time with each other. The way they spend that time is very formal and organized. The mentees are matched by an application process that does intake about their interests, age, location and their trajectory, so we’re matching them appropriately to each other.”

Warshawsky, one of the mentors in the program, said his role is to help guide young Jewish artists so they can begin thinking about what they want to say through their music.

“Through our mentoring, we help them find that,” Warshawsky said. “I’m working with four amazing teens. We talk about what it means to be a Jewish musician, how to share their gifts with the world and how to craft a message.”

Warshawsky’s mentees include Abbie Glass, 16, a Jewish Star 2019 winner from Springfield, N.J. After her first meeting, she felt a comfort zone with her mentor.

“My favorite thing is I feel like it’s a safe space I can go to, and Josh is very welcoming, so I can say anything and be myself,” Glass said.

The mentoring program is a true win-win for Jewish Rock Radio because both sides gain from the experience. Less, of “Jewish Women Rock,” said she was honored to be selected as a mentor.

“I feel very strongly about giving back,” Less said. “I had incredible mentors, but I had to really seek them out. It was hard, and I think what Jewish Rock Radio has done with Jewish Star and the Jewish Academy Mentoring Program has really enabled those of us who are farther along in our career to know that that’s immediately part of our responsibility, and if we are a step ahead of somebody, we should bring them along, too. I’ve met with my Jewish Star mentee Emily Groff, and it’s been phenomenal. I’ve learned from her, and she’s learned from me.

“I’m really excited to work with a young woman who’s just coming up. She’s an incredible music educator, and she also wonders about how to get her music out there, connect with people and tour. It takes skill to balance these career choices. I want her to know that there’s room for her in the field.”