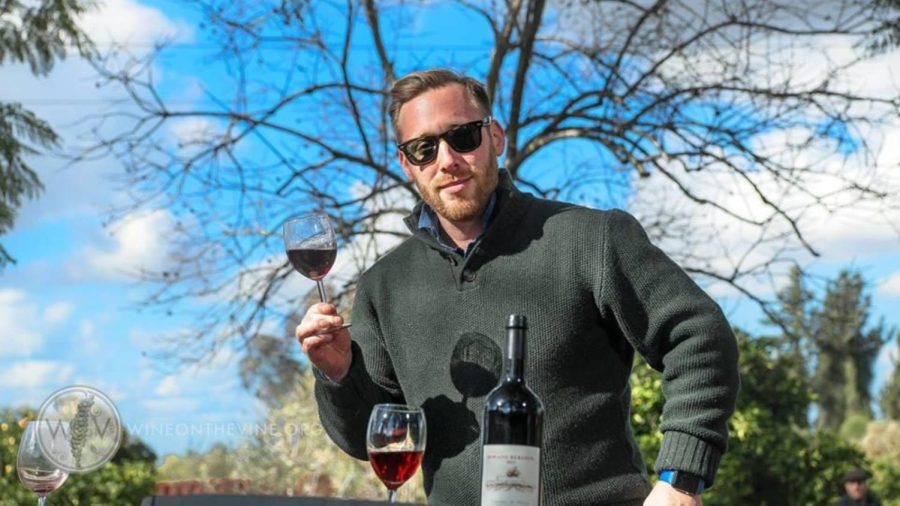 Adam Scott Bellos is the CEO of The Israel Innovation Fund (TIFF), which invests in commercial and cultural projects in Israel and beyond.

He is also the founder and host of Wine with Adam, a video series in which he speaks to a variety of guests over Israeli wine.

Originally from the United States, Bellos has worked in China and moved to Israel in 2011 after a semester abroad in Tel Aviv while earning his BA in Judaic studies from the University of Arizona. He also has an MA in Middle Eastern history from Tel Aviv University.

ISRAEL21c sat down with Bellos to learn about his experience in Israel and upcoming initiatives. This interview has been condensed for clarity.

What is your story of coming to Israel?

I grew up in Cincinnati going to Jewish day school, so I was quite familiar with Israel. When I was 18, I went on March of the Living and it changed my life and still has a lasting impact on me. I then studied abroad at Tel Aviv University when I was 20. I fell in love with living in Israel, being in the country, and all of its energy. It was then I became a Zionist. I went back to the University of Arizona, finished my degree, and then I moved here.

What led you to start the Israel Innovation Fund?

When I made aliyah, I knew early on that I did not want to just live here. I wanted to be a part of the country and political system. I wanted to have some type of role in the country’s future. That’s why I went to the army and that’s why I chose the path that I’ve chosen.

Prior to starting The Israel Innovation Fund, I was involved with several different businesses, and I consulted for different politicians. After doing my master’s degree, I decided that it was time for me to do my own thing. I felt like I had developed my reputation and learned enough to branch out on my own, so I wanted to start a new type of organization that would be built by my generation for the next one.

I wanted it to speak a language of culture instead of politics or religion, given that much of my generation and younger are not attached to Israel through its politics or religion. So, my organization has been built with very talented people and is focused on wine, art, film, parties and making content.

Speaking of content, how did you build your social media presence?

I’ve always wanted to do my own talk show, so two years ago I said to Hallel Silverman, “Let’s just make one on our own” and we started “Wine with Adam.” After the first three camera episodes, the Jewish News Syndicate saw it and acquired it. It’s now the number two watched program on JNS.

I don’t think my social media presence is that large compared to other people, but I think it’s strong. I don’t think influencing is about virality, but rather quality. I come from a filmmaking background, so I take a lot of time in prepping our content. We use very talented filmmakers and cinematographers, so we produce very high-quality content. I’m very proud of that.

Who are your followers?

Because we focus on Israeli wine, which is becoming more and more popular, we are growing fast. We work with influencers and larger celebrities [who] will come to Israel and we take them on wine tours.

It’s interesting, though, because I’m not a wine guy. I’m a Jewish and Zionist identity guy. I got into this because I feel that wine is the best tool to begin the conversation about Israel. It’s nice to know that my whole philosophy of showing people the culture is working to bring them into Israel.

What do you like most about what you do?

I get to drink wine, talk to people, and watch young Jews have fun. It’s great. Since I started “Wine with Adam,” it’s extremely humbling to get to meet the greatest minds that the Jewish world has seen in the 21st century. It is such a gift to have the time to be able to delve into all the different ideologies through speaking with so many amazing thinkers.

What was your biggest failure and biggest accomplishment?

My biggest failure is simple: I did not believe in myself enough when I started the organization. I was too tied down to things that have happened in the past. I’ve had other failures with hiring and fundraising before, but I learn more from my failures than anything else. And in terms of my biggest accomplishment, I haven’t had it yet.

What do you want to do next?

My next project is the National Wine Trail. It’s an initiative I’m working on now to bring together all of Israel’s municipalities in which wineries lie to create a large understanding of Israel as a wine country. I’m very excited about it.

If you could choose any new subject to cover, what would it be?

I think I would want to cover more Israeli film. Also, I would love to spread more Israeli content that’s native to the country to immerse the diaspora. I’m extremely passionate about the spread of the Hebrew language and culture.

Shawarma with tahina, hummus, and some good salatim [salads]. I love food. I have so many favorite dishes at restaurants all over the country.

What is your favorite place in Israel?

I have many. I love all the wineries that I work with. But if I had to choose one, it would be the balcony of the King David Hotel. It’s my favorite place in the world.