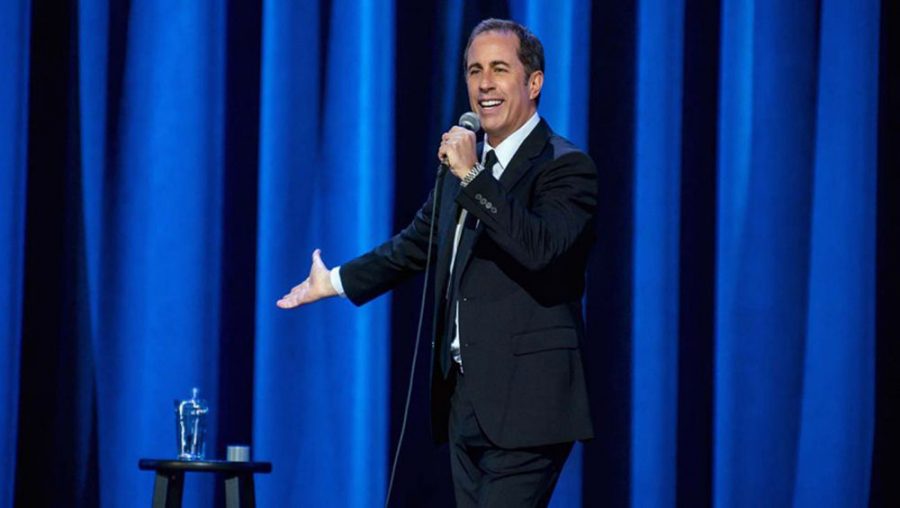 Jerry Seinfeld stars in a new comedy special on Netflix.

Comedy for a cause

From 6 to 8 p.m. on Sunday, May 10, NBC will present a live-streaming event called the “Feeding America Comedy Festival” (can also be seen on The Weather Channel” and Comedy TV). The program is aimed at raising funds to provide meals to those who need such help because of the financial impact of COVID-19. Viewers will also be directed to places where they can volunteer with organizations helping the “food insecure.”  Dozens of comedians have contributed pre-recorded video comedy segments for the special. The Jewish comedians appearing on the show include: JUDD APATOW, 52, JACK BLACK, 50, ANDREW DICE CLAY, 62, BILLY CRYSTAL, 74, BRAD GARRETT, 60, TIFFANY HADDISH, 40, JON LOVITZ, 62, HOWIE MANDEL, 64, MARC MARON, 62, ADAM SANDLER, 53, and SARAH SILVERMAN, 49.

The original HBO film “Bad Education” premiered on April 25 to great reviews. It’s based on a scandal that rocked the (heavily Jewish) Roslyn, New York school district in 2004. Superintendent Frank Tassone (Hugh Jackman), a highly respected educator, and his right hand-woman, Pam Gluckin (Allison Janney), stole $11.2 million dollars from the district. ALEX WOLFF, 22, has a big supporting role as the editor of a student newspaper that was the first source to expose the scandal.  The screenplay is by MIKE MAKOWSKY, 28, who grew up in Roslyn, which is located on Long Island.

“Prop Culture” is a Disney Plus series that was released, in its entirety, on May 1. It follows film collector Dan Lanigan as he revisits the props and sets of classic Disney films, including “Mary Poppins” and “Who Framed Roger Rabbit.”  RICHARD SHERMAN, 91, is one of the guest stars in the “Mary Poppins” episode. He and his brother, ROBERT SHERMAN (1925-2012), wrote the “Mary Poppins” score, which garnered them  two Oscar wins (best score and best song). CHARLES FLEISCHER, 69, who was the voice of Roger Rabbit, is a guest on the episode about that great animated film.

A new JERRY SEINFELD stand-up special entitled “23 Hours to Kill” started streaming on Netflix on May 5. The official description says, “[Seinfeld] tackles talking vs. texting, bad buffets vs. so-called “great” restaurants and the magic of Pop Tarts.” Also on Netflix is “Almost Happy,” an Argentine comedy/drama series about a radio show host with two kids and an ex-wife whom he still loves. Other plot details are scarce, but a third lead character is played by SANTIAGO KOROVSKY, 35ish. He was the co-writer of the 2019 film “Shalom Taiwan,” about an Argentine rabbi who travels the world seeking donations to save his synagogue.

The Smithsonian Channel is premiering two specials of Jewish interest. “Race to Victory” features rare color footage of the last months of World War II in Europe. Scenes include the liberation of the Dachau concentration camp (premiered on May 4. Many encore showings/or on-demand). Also: the Smithsonian Channel has a regular series called “Spy Wars,” which has an episode premiering at 7 p.m. Sunday, May 10, called “Exodus.” It details how top Mossad agent DANI LIMOR, now 72, led a mission to rescue Ethiopian Jews in the early ’80s. He set up a diving resort on the Red Sea and used that as a cover for smuggling Jews from Ethiopia to Sudan and on to Israel. This operation was the subject of the Netflix dramatic film “Red Sea Diving Resort” in 2019. Many complained that the Netflix film made many factual errors. This episode may set record straight.

The Food Network is home to (I think) the first completely new quarantine show. It’s entitled “Amy Schumer Learns to Cook.” SCHUMER, 38, married Chris Fischer, a top chef, in 2018 and had a son, Gene, the following year. Fischer grew-up on a farm on Martha’s Vineyard, an island off Massachusetts where many famous folks vacation.  Schumer and Fischer have a vacation home on the island, deep in the woods where they are sheltering in place along with Gene, their dog and their nanny, Jane (who operates the camera). “Cook” is an eight-episode series that starts at 9 p.m. on May 11 (the first two episodes are back-to-back). We will get to see Schumer enjoy her favorite bedtime snack: matzah with butter.  Episodes also feature video calls from “surprise” celebrities.

On May 12, ABC is broadcasting (at 7 p.m.) a tribute to the late comedy writer, director and occasional actor Gary Marshall. Everything about his persona screamed “Jewish,” but he wasn’t a member of the tribe. He did play a Jewish hippie grandfather in the 2006 comedy “Keeping Up with the Steins.” Marshall is best known for creating “Happy Days” and its spin-off series, and for directing many hit movies, including “Pretty Woman” and “Beaches.” Many celebs appear paying tribute to Marshall—the Jewish ones include “Happy Days” cast members HENRY WINKLER (“Fonzie”), 74, DON MOST (“Ralph”), 66, and ANSON WILLIAMS (“Potsie”), 70; also: DAVID LANDER (“Squiggy”), 72, from Laverne & Shirley”; and BARBARA HERSHEY, 72, a co-star of “Beaches.” By the way, “Happy Days” had seven lead characters and four were played by Jewish actors (the late TOM BOSLEY, “Mr. C.” was Jewish, too).  I’ve long thought that only a non-Jew wouldn’t worry about casting so many Jews.