Israeli chef serves up diverse tastes of the Mediterranean 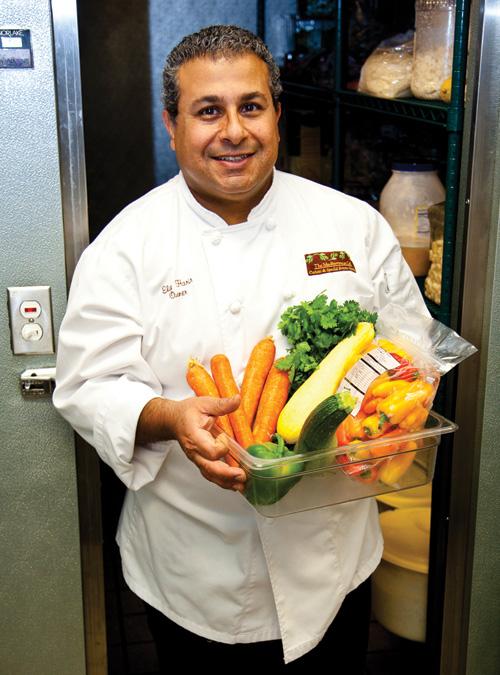 Chef and owner Elie Harir emerges from his walk-in refrigerator with fresh vegetables.

Where some might have seen only a gap in the St. Louis culinary landscape Igal Alon and Elie Harir saw an opportunity.

“St. Louis has a lot of different flavors and the restaurant business has really developed in the last couple of years,” Alon said, “but when it comes to Israeli food I haven’t really found any place that is truly where you walk in and feel you are in Israel.”

The pair, both natives of the Jewish State, think they finally solved that problem this summer with the introduction of the Mediterranean Grill, the eclectic establishment they co-own in the Chesterfield Valley featuring dishes from Greece to North Africa.

“The variety is very good,” Harir said. “It’s from all around the Mediterranean.”

The goal, said Alon, was to create a dining experience that would give customers a sampling of food from the region with a focus on offering an authentic and extensive palette of flavors.

“That’s much like in Israel which has been influenced by a wide variety of dishes with so many immigrants coming there,” he said. “When I wanted to open a restaurant, I sat down with my grandma and I wanted to take some of her recipes that I wanted to preserve.”

Some dishes, like Moroccan cigars, a meat-filled pastry, strongly reflect Alon’s unique heritage. His family came to Israel from the North African nation. Others reflect influences from Ashkenazi culinary traditions that are now found in Israel.

Harir, 44, who has spent a lifetime in food service doing everything from managing a bagel restaurant in Connecticut to running a catering business in St. Louis, said he’s already seen great response. Particularly popular is the schwarma, which is available on Tuesdays as a special.

“It’s really like a slice of Israel,” he said. “I’m making it just the same way they do in Israel.”

That’s reflective of the clientele. Harir estimates about 70 percent of the establishment’s customers are Jewish.

Alan Taxman counts himself among those. The Clayton-area financial advisor and Congregation B’nai Amoona member has scheduled business lunches at the grill as well as family dinners. He said the Mediterranean Grill is a welcome addition to the area’s dining choices.

Taxman, who favors the lamb and beef kabobs, said he enjoys entertaining clients and friends at the grill.

“I’ve taken people there who have never been before and they’ve been impressed and have come back,” the 41-year-old Creve Coeur resident said. “Every time I go back there seems to be more and more people there so it seems to be getting around.”

As for the restaurant, Alon, 35, said the arrangement between the two men is for Harir to handle the culinary aspects while Alon takes care of the marketing and business end.

The enterprise also relies on a dual business model in how it serves its clientele.

“During lunchtime it is more fast-paced because most of our clients are expecting to walk in, get something pretty fast, sit down and go back to work,” he said. “Dinner is a bit different with a waiter and a much more extensive menu. For lunch it’s more about the sandwiches.”

The grill also features outdoor dining as well as a catering service, which Alon said has already done bar mitzvahs and weddings in the area.

A unique selection of Israeli wines is in the plans as well though the eatery is still working to procure its liquor license, a process Alon expects to take about a month or so.

In the meantime, Alon and Harir continue to have big dreams for the future.

“We’re getting great response,” Alon said. “I would say it’s very exciting because we get so much feedback. The comments we get on the food are excellent.”

For more information about the Mediterranean Grill, located at 703 Long Road Crossing in Chesterfield, call 314-495-7731 or visit www.themedgrillstl.com.