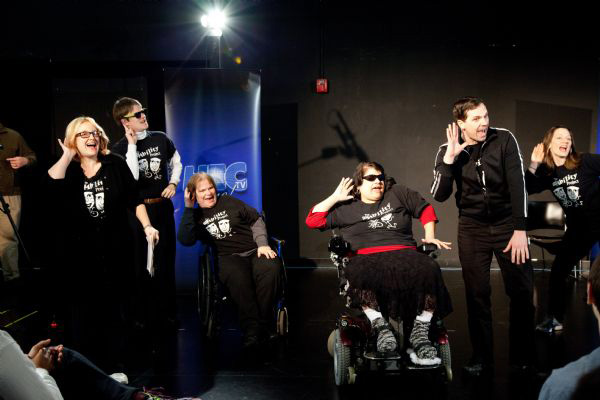 As the cameras flipped off and the final dance routine came to a close, the dozens of teens and tweens in the room were duly impressed.

“It was really interesting and kept you involved,” said one beaming 13-year-old pausing to talk as he filed out with the rest of his class from the Crossroads College Preparatory School auditorium. “When they said ‘only three minutes left,’ I thought, ‘How did it go by so fast? It’s impossible.'”

In fact, a great many things are possible with the DisAbility Project and teaching that lesson is part of the reason this unique theater ensemble exists in the first place. Founded 14 years ago by area residents Joan Lipkin and Fran Cohen, the artistic performance troupe aims to raise awareness about disabilities, diminish bigotry and promote inclusion.

“A lot of people say that seeing our work is transformative for them, especially students,” said Lipkin. “They say it alters the way they see the world.”

Next week, the Jewish community will have a chance to have that kind of world-altering experience as the group brings its blend of song, dance and performance to the Jewish Community Center. The Marvin and Harlene Wool Studio Theatre will host an afternoon with the players on Sunday, March 13 at 2:30 p.m. Admission is $5 though Lipkin said no one is ever turned away due to lack of funds.

“I was interested in the fact that I didn’t see many people with disabilities in the audience, let alone on stage,” she said. “It seemed to me that there was a crucial part of the contemporary experience that was being left out.”

The mission of the DisAbility Project is to supply that missing part. The 20-member company performs everything from a rap single to a dance number to a signature introduction skit entitled “Hello” in which a little girl wants to greet a person with a disability. The mix of theater, music, humor and teaching is delivered by a cast that includes individuals living with disabilities ranging from asthma to cerebral palsy to Down syndrome to bipolar disorder.

It also includes individuals who have no disabilities at all, people Lipkin calls the “temporarily able-bodied.”

“At some point all of us are going to experience disability whether it’s temporary or longer-term through an accident, illness or even just the fact of aging,” she said. “It’s really important to understand and have a more interdependent society where we recognize differences.”

Cast members love the experience of performing as much as the audience.

“I’ve never actually been involved with theater or music or anything like that but I’ve always been sort of a ham,” laughs Ana Jennings, a 42-year-old Kirkwood resident who has been a part of the group for more than a decade.

A spinal cord injury confined Jennings to a wheelchair at age 18. Today, she enjoys interacting with audiences like the one at Crossroads, where the group was being simulcast by HEC-TV.

“I’m hoping that we educated and entertained at the same time with the students so that they think about disability in a different way, not as a limitation but as a way of going forward despite a limitation, despite obstacles,” she said.

Margaret Jorgenson said that, for her, changing the attitudes of others was always in her blood.

“I tried advocacy, going to Jefferson City, doing the political thing but it takes a certain person to do that,” said the 49-year-old who was diagnosed with rheumatoid arthritis and a degenerative joint disease 10 years ago.

The Ste. Genevieve resident recalls a recent show at a high school when a girl in the audience asked what she could do to help. It’s experiences like those that Jorgenson finds so meaningful.

“I love this kind of advocacy because you entertain people but you are still an advocate,” she said. “You are still bringing out that message.”

Every show includes a question-and-answer session at the end of the event.

“We actually consider that to be part of the performance, part of the experience,” Lipkin said. “We’ve performed and shared and now we want to hear from you.”

She calls the show a mix of entertainment and education.

“It is our belief that we can affect people’s attitudes and hopefully their behaviors, one person at a time,” she said. “We see ourselves as a force for social change.”

Lipkin said that the upcoming JCC event will give a chance for the group to expand its repertoire. One piece, entitled “Why Am I Praying?” will explore spiritual questions, a topic that isn’t often covered with the DisAbility Project’s usual audiences in schools. Lipkin said that the venue will provide an opportunity for a more diverse, intergenerational crowd.

“What’s special about the JCC performance is that we are really seeing this as an opportunity for families to come,” she said. “When we are performing in the schools, moms and dads and sisters and brothers don’t have a chance to see what their children are seeing. This way, it’s something that a family can enjoy together.”

Lipkin said that she and Cohen feel like they are putting the concept of tikkun olam into practice every day by promoting equality.

She also expressed gratitude to the Staenberg Family Foundation, which is helping to fund the upcoming event. It will be the first time the DisAbility Project has ever played the JCC.

“We’re going to be in their beautiful new theater, which I’m very grateful about,” she said. “I feel like we’re coming home.”