‘Imagine This’ weaves together stories of Jewish Resistance 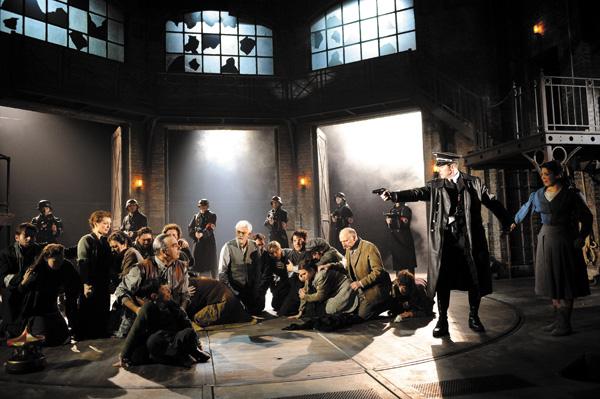 “Imagine This” is an original musical that juxtaposes the story of Jewish Resistance in the notorious Warsaw Ghetto during the Holocaust with the story of the Jewish Zealots at Masada in Israel 2,000 years earlier. The Zealots held off an entire Roman legion of 10,000 troops for an extended period. While both of these episodes in Jewish history ended tragically with the literal burning down of the entire Warsaw Ghetto by the Nazis and the storming of the Jewish encampment by the Romans, resulting in all of their deaths, they both contain inspirational elements of brave Jewish Resistance against two of the most powerful tyrannical regimes of all time: ancient Rome and the Nazis.

On Sunday, Aug. 22, the digitally recorded screening of “Imagine This” will have its St. Louis premiere during a program sponsored by the St. Louis Holocaust Museum and Learning Center and the Jewish Community Center. The play tells the story of a group of actors and entertainers in the infamous Warsaw Ghetto who decide to put on a play about the Jewish Zealot leader Eleazar and his 960 followers who set up an encampment on Masada, a former fortress of Herod the Great.

Beth Trachtenberg, a Philadelphia native now living in Florida, is the producer of “Imagine This.” She has spent her career as an independent television producer and entertainment industry executive in the United States and Europe. As head of her own production company, Trachtenberg will be in St. Louis for the local screening of “Imagine This,” which originally opened as live on stage at the New London Theatre in London in November 2008.

The St. Louis Jewish Light caught up with Trachtenberg recently to ask her about “Imagine This.”

Tell me how “Imagine This” came into being and what drew you to this production?

Shuki Levy, the composer of “Imagine This” is Israeli and, from the first time he saw Masada as a child, felt a strong connection to the story. After achieving great success over the years as the creative force behind Saban Entertainment, he started working on an oratorio for a musical about Masada and put out a double CD that he recorded with the Moscow Symphony Orchestra. Although it was a fantastic piece of work, it didn’t lend itself to the stage or musical theater.

Roughly 10 years ago, Shuki was introduced to Glenn Berenbeim, the scriptwriter. Glenn had been an executive producer/writer of the television series “Touched By An Angel” and it was Glenn who was struck by the resonance between the Resistance on Masada and that in the Warsaw Ghetto.

The production notes compare “Imagine This” to “Fiddler on the Roof.”  I also saw elements of “Romeo and Juliet” and its modern incarnation “West Side Story” in terms of the star-crossed lovers.  Is this a valid comparison?

There’s certainly a resemblance to “Romeo and Juliet” or “West Side Story” in the “play within the play” of “Imagine This.” One major difference between the love story in “Imagine This” and that of the other plays is that in this case, though the star-crossed lovers are also ultimately separated by death, “Imagine This” (relies on) an act of resistance against the Romans that leads to Rebecca/Tamar’s death as opposed to a desperation born of thwarted love.

Except perhaps for elements of “The Sound of Music,” I do not know of another serious musical regarding the Holocaust.  There is much joking and humor in “Imagine This.” How do you see humor working in the production?

As you point out, humor is a weapon that Jews have traditionally used through the ages as a means of survival. That’s very much the inspiration for the way we use humor in “Imagine This” – we believed that a man like Daniel or his sister, Sarah, or the cabaret clown, Izzy, despite their awful circumstances, would still have managed to find humor in them.

Will “Imagine This” be presented at other venues similar to the August 22 event at the JCC in St. Louis?

The screening in St. Louis is actually the second event of its kind. The first was a very successful event, which took place in Cincinnati at the Mayerson JCC last year. As word has gotten around about “Imagine This,” I’m getting inquiries almost daily from JCCs and Jewish Film Festivals around the country about booking screenings of the show. My hopeings of the show. My hope is that as audiences become familiar with “Imagine This,” the foundation will be laid to launch a live touring stage production here in the U.S.

How have Holocaust survivors responded to the play, especially those with direct knowledge of the Warsaw Ghetto?

For the most part, Holocaust survivors and their families have been enormously supportive of “Imagine This.” A number of the investors in “Imagine This” are the children of survivors and we worked closely with the preeminent Holocaust Organization in the United Kingdom as the show was being developed. In addition, a survivor of the Warsaw Ghetto was a consultant to Glenn Berenbeim as the script was being written. I think, without exception, we got the support we did because, as there become fewer and fewer survivors still living, they and their families want to see the story of what took place during that horrific period live on in all forms of media, whether it be books, movies or on the stage.

Do you anticipate that “Imagine This” will have “legs” for general audiences or is it regarded as being “too Jewish”?

From the beginning I have always believed – and continue to – that “Imagine This” has a universal message that transcends religion, nationality or ethnicity. It is a story of what man is capable of doing to his fellow man if hatred and intolerance are allowed to triumph and, above all else, it is a story about regular human beings – mothers, fathers, sisters, brothers – who, even in the face of evil, find a way to hold on to their humanity.

My experience has been that general audiences absolutely respond to “Imagine This” on that level and that only the critics or commentators take issue with the content or it being “too Jewish.” Certainly most of the audience members in London were not Jewish and more than half of the investors in the show, including many of the largest investors, were not Jewish.

How do you want audiences to feel when they leave the theater after seeing “Imagine This”?

Moved and inspired and thoughtful. It is obviously not an evening of escapism. However, it is an evening of wonderful theater with an intelligent story and fantastic music. I think that anyone seeing “Imagine This” will never forget doing so.

How much: $18 general admission and $36 at the mitzvah level. Not recommended for children under 12 years of age.