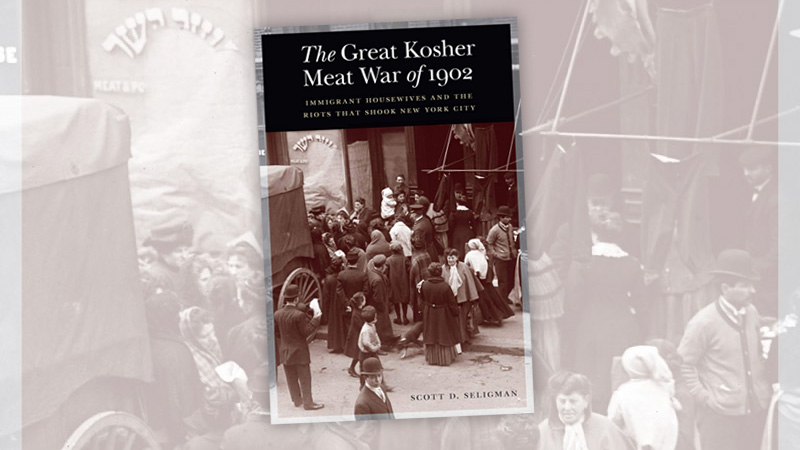 In 1902, meat packers increased the price of kosher meat, and religious immigrant Jewish women on the Lower East Side of New York City were having none of it.

Thousands took to the streets in sometimes bloody protest, and their efforts led to a reversal of the price hikes. Their activism continued, helping Congress to pass food and drug consumer protection laws and, eventually, women’s right to vote.

Their efforts are documented in the new book “The Great Kosher Meat War of 1902: Immigrant Housewives and the Riots That Shook New York City” by Scott D. Seligman It tells the story of how these mostly uneducated immigrants who observed kosher eating laws and struggled to purchase kosher meat were capable of achieving success when they were able to remain united.

At the beginning of the 20th century, the six largest Chicago meat suppliers created the Beef Trust and notified wholesalers that the prices on kosher beef would be increased. The wholesalers immediately passed this price increase to their large customer base, the New York City kosher butchers.

The butchers, in turn, were forced to increase the retail price to the poor Russian and Eastern European religious families who were simply unable to afford the increased price of kosher meat and poultry.

As a result, the women began to organize what Seligman calls the Great Kosher Meat War. Inspired by the success of labor unions in the late 19th century, they formed associations, elected officers and boycotted butchers who had raised prices. On May 15, 1902, approximately 3,000 Jewish women gathered in the streets of Manhattan’s Lower East Side, prepared to shut down every kosher butcher shop.

What had begun as a nonviolent boycott quickly became a riot as customers, primarily women who had crossed the picket line, were heckled and assaulted. Many were sent to the hospital.   Butcher shops that remained open were attacked, their windows smashed and stock ruined.

Police used their nightsticks to try to keep order, but to no avail.  Newspapers referred to the events as a “modern Jewish Boston Tea Party.”

The women who participated in the Meat War were successful, and kosher meat prices eventually decreased. This uneducated group of women took on the meat cartel and accomplished something that the U.S. government had found difficult: keeping meat prices reasonable.

Their success inspired them to take on other causes. In 1904,  women again took to the streets to boycott and protest huge rent increases. The following year, with the publication of Upton Sinclair’s book “The Jungle,” they played a large role in urging Congress to pass the Pure Food and Drug Act and the Federal Meat Inspection Act, both in 1906. They were later active in the civil rights movement and were ardent supporters of women’s suffrage, again achieving success when the 19th Amendment gave women the right to vote in 1920.

Of course it did not hurt the women’s cause to have an ally in the White House in Teddy Roosevelt, whose views on these issues were primarily the same as those of the lower East Side of New York City.

Seligman is an award-winning writer, historian, genealogist and retired corporate executive. He has an undergraduate degree in history from Princeton University with concentration in American civilization, and a master’s degree from Harvard University. A resident of Washington, D.C.,  Seligman has written several previous books including “The Third Degree: The Triple Murder That Shook Washington and Changed American Criminal Justice” and “The First American: The Remarkable Life of Wang Chin Foo.”

He has done a remarkable job in researching “The Great Kosher Meat War.” Almost all of his source material are primary sources, including a large number of New York’s newspapers, as well as out-of-town newspapers, and local and Jewish magazines.

Seligman has succeeded in keeping his comments as even-handed as possible. Early in the book, he explains in detail what makes kosher meat more expensive than non-kosher meat. The increase in cost is passed on from the meat cartel to the butcher to the consumer. Unfortunately, those hit the hardest were the ones for whom kosher meat was a conviction, not a preference.

Readers may not agree with the process, but Seligman is simply explaining why this might cause an economic hardship for those who would like to observe the Jewish rituals. This is a unique book certainly worth reading.