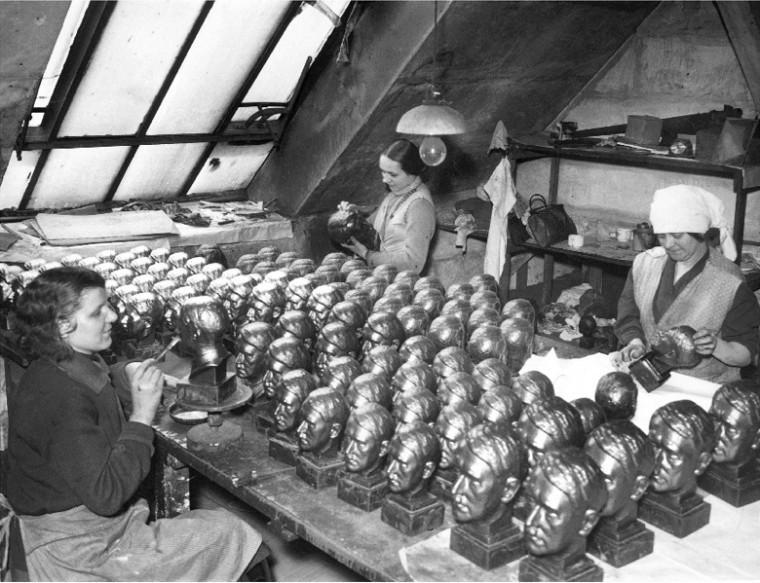 BERLIN — The image of Hitler is still arresting, 65 years after his suicide and the end of World War II.

Now the German Historical Museum has dedicated an exhibit to the fascination Hitler held for the “Volk,” the ordinary German citizen.

It marks the first time a German museum has ventured into such territory, and the curators say they have taken great care to avoid glorifying the man behind the Third Reich, which in Germany would not only be distasteful but illegal.

Controversial though it is for some, the exhibit has been welcomed by the Central Council of Jews in Germany. The council’s secretary general, Stephan Kramer, said he thought the timing was right, given today’s political climate.

“Especially the lower-middle classes are susceptible to wanting to be led,” he said, and politicians are “instrumentalizing their fears.”

Kramer said the exhibition “is dealing seriously with the issue, and I don’t think there is a danger of any form of glorification.”

“Hitler and the Germans,” which opened Oct. 15 in Berlin and runs through Feb. 6, includes posters, artifacts and other contemporary propaganda illuminating the complex interaction between the public and their “Fuhrer,” or leader.

Objects are arranged in three chronological and thematic chapters, focusing on the socio-political conditions, forms and consequences of Hitler’s rise to power. The propaganda messages on display are countered by images that convey the reality of what was happening. Exhibit items were set up in a nearly 1,300-square-yard exhibition hall in ways to discourage neo-Nazis from taking heroic photos of themselves near images of Hitler.

The exhibit opens only days after a new study by the Friedrich Ebert Foundation showed that some 10 percent of Germans still wish they had a Fuhrer to tell them what to do during these hard economic times.

“My idea, my wish, is to explain these historical events so that people know the dangers which are caused by irrational mass movements,” curator Hans-Ulrich Thamer told JTA.

The “fascination [with Hitler] was caused by very modern technical methods, with movies and microphones and so on,” Thamer said. “People at this time thought it was very modern.”

Though it does not focus extensively on the genocide of the Jews, the exhibit “shows the persecution of German and European Jewry as one of the results of the rhetoric and ideology of the ‘Volksgemeinschaft,’ ” – the Nazi concept of a so-called Aryan racial community, Thamer added. A sign reading “Jews are unwelcome in our town” is one of the items on display.

Illustrating the growth of the Fuhrer movement and the Nazi party, posters place Hitler alongside examples of “perfect” German specimens, past and present.

There are also items that were never meant to be seen by the public, such as Hitler’s secret memo regarding the so-called euthanasia program in which physically or mentally disabled citizens, whose lives were deemed unworthy by the state, were murdered in gas chambers.

Hitler, Austrian by birth, started off as an uremarkable soldier in World War II and rose to become the head of the National Socialist Party.

Jailed after his attempted putsch in 1923, he wrote his notorious autobiographical polemic “Mein Kampf” in prison and emerged as a popular figure. He became chancellor in January 1933 and soon amassed dictatorial powers.

Twelve years later, with 6 million European Jews murdered, tens of millions of European and Soviet soldiers slaughtered in battle, and many German cities lying in ruins, Hitler continued his anti-Semitic rants in his last will and testament, charging his followers to resist “the universal poisoners of all peoples, international Jewry.”

Today, the spot above Hitler’s former bunker, where he killed Eva Braun and himself, is marked by a small sign. It’s a few steps from the national Holocaust memorial.