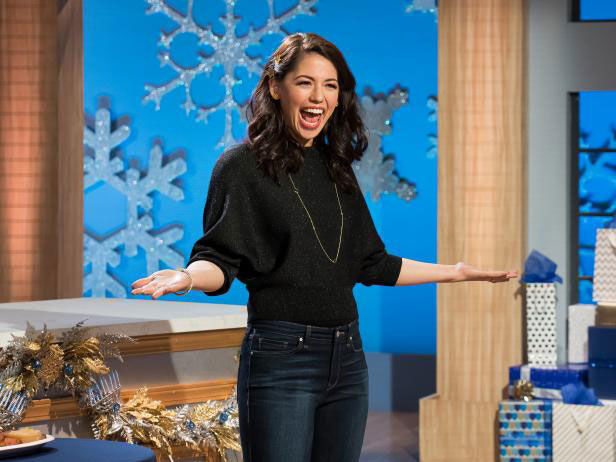 Molly Yeh is the host of Food Network’s “The Ultimate Hanukkah Challenge,” which airs Dec. 21.

BY NATE BLOOM, SPECIAL TO THE JEWISH LIGHT

A special episode of the hit TV series “Elena of Avalor,” entitled “Festival of Lights,” first aired on the Disney Channel on Dec. 6. There are many encore showings and it’s available on-demand. “Elena” is an animated series about the crown princess of a mythical Latino kingdom. The episode’s premise is that Elena welcomes the shipwrecked Princess Rebeca (JAMIE LYNN SIGLER, 38) and her grandmother, Miriam (TOVAH FELDSHUH, 67). The two have come from Galonia, a Jewish-Latino-inspired kingdom. In their encounters, Elena learns about the Hanukkah celebration and its importance to the Jewish community.

The host is MOLLY YEH, 31, the daughter of a Chinese-American Protestant father and an American Jewish mother of Hungarian descent. Yeh has hosted several other Food Network Jewish cooking specials. The judges are DUFF GOLDMAN, 44, and SHARONE HAKMAN, 38. Goldman is a famous pastry chef who has hosted a number of Food Network shows, including “Ace of Cakes.” Last September, in a speech to the Cornell University Hillel, he noted how important tzedakah (charitable giving) was to his life. Hakman is a self-taught chef who chucked financial planning for restaurant jobs at age 32. He, too, has hosted on the Food Network. A Californian, he is the son of Israeli parents and the grandson of Holocaust survivors. He was Yeshiva-educated. (The program airs locally at 9 p.m. on Dec. 21, but is also available via on-demand and on the Food Network website).

At the movies; year’s end

A number of “big” films open in very limited release during the last weeks of the year so they can qualify for the upcoming Oscars.

“Bombshell” opens across the United States on Dec. 20. The film tells the story of how Roger Ailes, the founder of Fox News, was exposed as a serial sexual harasser. The all-star cast includes Charlize Theron, Nicole Kidman, and John Lithgow. The director is JAY ROACH, 62, a convert to Judaism and the husband of SUSANNA HOFFS, 60, the lead singer of the Bangles rock band.

The epic war film “1917,” scheduled to open on Dec. 25, follows two young British soldiers at the height of the First World War.  They are given a seemingly impossible mission: quickly cross German-occupied territory and tell a 1,600-man British battalion that the Germans are planning to ambush them.

“1917” has received great advance reviews. The film is nominated for a 2020 Golden Globe award for best dramatic film and the film’s director and co-writer, SAM MENDES, 54, is nominated for a Golden Globe for best film director.  Mendes is British. His father, who is a UK citizen of Portuguese descent, isn’t Jewish. His mother is an English Jew. His parents divorced when he was young and he was raised by his mother. Success came early to Mendes, who was acclaimed while still in his ‘20s as a great theater director. He received an Oscar nomination for his first feature film (“American Beauty,” 1999) and has had many hits since, including the Bond films “Skyfall” and “Spectre.”

Likewise, the new remake of “Little Women” got great reviews following its Dec. 7 special one-theater opening. However, unlike “1917,” it didn’t get many Golden Globe nominations. Of course, the film is based on the famous Louisa May Alcott 19th-century novel about four young adult sisters. TIMOTHEE CHALAMET, 23, plays Theodore “Laurie” Laurence, the only major male part in the film or novel.

The documentary “Mel Brooks: Unwrapped” began streaming on HBO Saturday, Dec. 14. Filmmaker ALAN YENTOB, 72, has conducted interviews with BROOKS, now 93, since 1981. The documentary deftly combines this interview footage with other material to give us a wonderful portrait of a truly funny man. Yentob, the former creative director of the BBC, was born in the United Kingdom to Iraqi Jewish parents.

Buzz is that “The Witcher,” a Netflix action-fantasy series that begins on Dec. 20, will be something of a “Game of Thrones” replacement. It centers on a solitary “monster hunter” (Henry Cavill) who lives in a sort-of-medieval world. British Jewish actor ADAM LEVY, 49, has a large supporting role (“Mousesack”). Levy’s father is an Iraqi Jew. His mother is Russian Jewish.