Grandson of Auschwitz survivor takes the ice for Germany 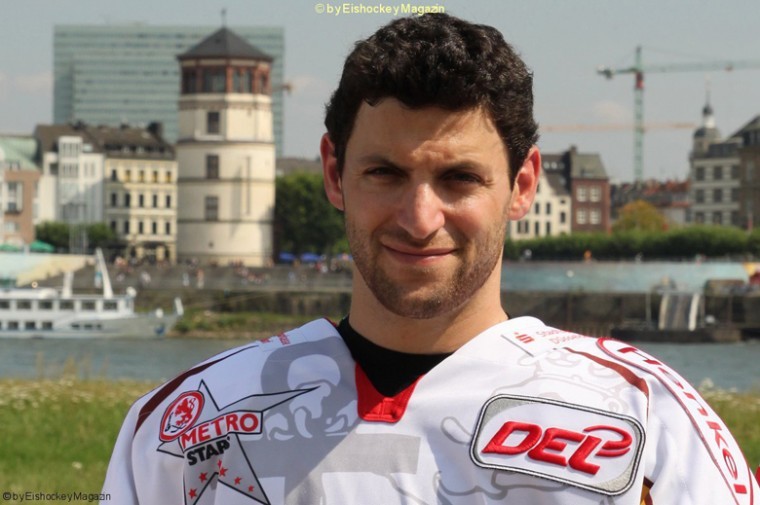 Evan Kaufmann, a U.S.-born hockey player whose great-grandparents were killed in the Holocaust, is now representing the German national team.

WEST BLOOMFIELD, Mich. — More than 65 years ago Kurt Kaufmann was liberated from the Auschwitz concentration camp. This weekend his U.S.-born grandson, Evan Kaufmann, is taking the ice for the German national hockey team.

After finishing a successful college hockey career at the University of Minnesota, Kaufmann tried out for several professional hockey clubs in the United States before being advised by his agent that his best option was to play for a German team in the Deutsche Eishockey Liga. Thanks to his late grandfather’s German roots, Kaufmann received German citizenship quickly and, together with his wife Danielle, relocated to Dusseldorf in 2008. This weekend, the 28-year-old forward will represent the German national team in the Minsk Cup, a four-nation tournament. He’ll also compete with the national team in May’s world championships, and hopes to have a chance to make the German Olympic squad that will compete in the 2014 games in Sochi, Russia.

During his first years playing for the DEG Metro Stars, Kaufmann kept his Judaism to himself and didn’t tell his teammates that he was the grandson of an Auschwitz survivor or that his great-grandparents perished in the Holocaust.

“At first I was pretty uncomfortable expressing that I was Jewish and speaking about my family’s background, but that was true even in America. It’s not something in the hockey world that is really talked about,” Kaufmann told JTA. “It’s not something I was comfortable sharing with most people. But I’ve found that the younger generation here in Germany is open to differences and from my experience they’ve all been interested in knowing more about being Jewish, including the holidays and traditions.”

Kaufmann married Danielle Liberman, whom he met at Adath Jeshurun Congregation in Minnetonka, Minn., the Conservative synagogue where their families are members. Rabbi Harold Kravitz recalls that “they took notice of each other in our sanctuary when they were at High Holiday services a few years ago and started to date. They married in our sanctuary a few years later.”

The couple is expecting their first child, a son, this June and will be relocating from Dusseldorf to Nuremberg, where Kaufmann recently signed a three-year contract with the local team, one of fourteen in the German hockey league.

How did his parents react when he decided to play professional hockey in Germany? “They were a little unsure initially just because of everything that happened [in Germany], but they knew it was my lifelong goal to be a professional hockey player and I committed so much time to it,” Kaufman said. “It’s an issue not just for them but for a lot of American Jews in general. Germany is so different today than it was back then. I wish more people could come over here today so they wouldn’t have to carry that stereotype forever.”

Being chosen to play for the national team carried with it mixed emotions for Kaufmann as well. “A lot of the time I was thinking whether my grandpa would be happy about this or sad or mad. The more I thought about it, I know he had plans to come back to Germany before he died. He wasn’t able to, but that helped me get over those initial fears. I feel more pride with the association of feeling German than I ever thought I’d have.”

Observing Judaism has been a challenge for the young Kaufmanns as well. “The first year we were in Dusseldorf, we went to a small Orthodox synagogue. We had a tough experience. We were taking photos from the outside and we were questioned and had to show our passports because there was an incident there a few years prior. That spoiled it for us.” The couple does make a point of trying to keep the Jewish traditions alive. They share holiday dinners together and observe Rosh Hashanah and Yom Kippur, and the Passover seder.

Since becoming more open about his Judaism and his family’s ties to the Holocaust, Kaufmann’s teammates have become more curious. “They want to know what everything means for me compared to them. But ultimately, they know who I am as a person. Our friendships were established without religion so it doesn’t change anything. I was always hesitant to talk about it, but now that I’m being more public about it, I’ve become more comfortable with the history. I think it’s a good story to express.”

While his teammates tell him that anti-Semitism still exists in certain regions in Germany, Kaufmann hasn’t experienced any firsthand. “I don’t think it’s any different than in America or any other country. There’s always going to be people who have their own beliefs. Personally, I’ve only had good experiences in Germany.”

Kaufmann knows that he has his detractors in the Jewish community who find it troubling that someone who lost members of his family in the Holocaust could be playing for the German national team. “Initially there was a part of me that thought that way,” Kaufmann said. But, he added, “I’ve always been taught to give people a second chance.”

“Everything that happened was so long ago and in a country that was so different,” Kaufmann said. “Obviously, I never want to forget what happened and that’s why I tell my story. But to hold that against a whole country of people who had nothing to do with it would not be right.”

Kaufmann has considered that he could be competing against the United States in May at the world championships, but he’s not concerned. “I’m focused on helping this team and playing my role within the squad to help us win hockey games and I don’t think it matters who the opponent is.” In addition to fulfilling his dream of playing on the Olympic team in two years, Kaufmann also expressed his desire to get his son skating when he’s three years old, a year earlier than his own first time on the ice.