Glynis Bell is riveting in ‘Underneath the Lintel’ 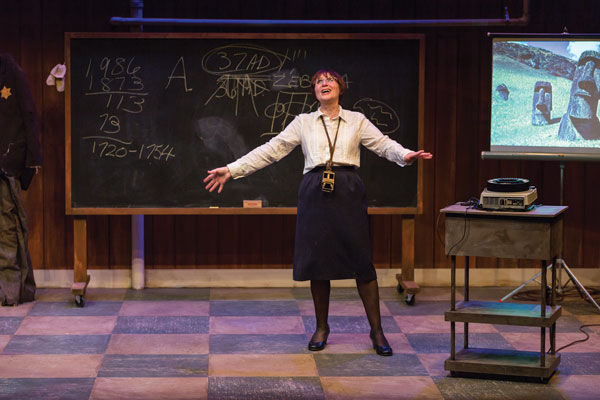 Glynis Bell in the NJT’s ‘Underneath the Lintel.’ Photo: Eric Woolsey

“One singular sensation” describes the virtuoso performance by Glynis Bell as the librarian in the New Jewish Theater’s production of Glen Berger’s audacious and thought-provoking play “Underneath the Lintel.”

Bell, who is on stage every minute of the 1½-hour, one-woman play, demonstrates the range and endearing qualities that have made her a popular actor in a variety of challenging roles at the Repertory Theatre of St. Louis, including Peggy Guggenheim in “Woman Before a Glass.”

Bell is skillfully directed in “Underneath the Lintel” by St. Louisan Lana Pepper, who has directed the actress three times previously. Berger’s play is brainy and truly multilayered, combining history, mystery, myth and reality as it challenges the audience to keep up with his flight of ideas that come hard and fast throughout the performance.

Bell plays the almost comically conscientious librarian in the city of Hoofddorp, Holland, which she had rarely left. Her life centers almost exclusively around her work at the library.

We learn from the librarian’s extended monologue that her daily routine received a shock when she found in the overnight return bin a copy of a “Baedeker’s Travel Guide” checked out Nov. 12, 1873, by a person who signed his name simply as “A.” The strictly by-the-rules librarian is offended that even though the book was overdue by 113 years, the borrower used the overnight slot rather than return the book at the counter and pay the fine.

Within a short period of time, the librarian moves from incredulous curiosity about the long-overdue volume to an obsessive search for information about the mysterious Mister A., which causes her to break out of her self-imposed shell and travel to exotic parts of the world to solve the mystery. Her aptitutde as sleuth rivals those of Sherlock Holmes and Agatha Christie combined.

The sparsely arranged set consists of a chair, in which the librarian never sits, a table with a suitcase that contains “the scraps of evidences” about Mister A., a chalkboard on which she writes down dates and locations she visits to solve the riddle, and a vintage slide projector from which she shows slides on a battered screen of several of the cities she has visited on her quest.

During the course of the play, it begins to dawn on the librarian that Mister A. might actually be the infamous Wandering Jew, a Christian mythical character who was said to have blocked or rejected Jesus as he was being led to his crucifixion.

In the myth, which has several variations, the Jew at first wanted Jesus to rest for a moment at the door of his shop; but was urged on by the Roman soldiers to make him get up again and resume his march to the cross.  Jesus is said to have cursed the Jew to a near eternity of wandering the world, never dying — a fate that would only end at the Second Coming of Jesus as the Messiah.

The myth of the Wandering Jew through the centuries has been an anti-Semitic metaphor for the Jews as an eternally cursed people for having rejected Jesus and abetting his crucifixion.

The librarian gathers an array of tantalizing clues in her quest for Mister A., from a report by a German tram operator of a passenger who was a “dirty Jew” refusing to sit down, to a pair of trousers that he had left at a Chinese laundry in 1912 that she discovers is still there, to a recording of Mister A. and a woman companion named Esther who confesses her strong love for him in a letter written in Yiddish.

The librarian comes to realize that like Mister A., she has let her golden chances pass her by.  She was in love with a classmate but was too shy to act upon it. She begins to question whether any single life has any real lasting impact a few years after one’s inevitable death.

The term “lintel” refers to the frame around a door, which comes to symbolize how all of our lives are “framed” — as a dedicated librarian whose life is passing her by, or as a mysterious man who might be the accursed Wandering Jew, not as a myth but as a reality.

“Underneath the Lintel” may leave some in the audience a bit overwhelmed with its historical and philosophical underpinnings and its hopscotching of the decades and the globe. But Bell’s commanding and engaging presence delivers a show that is both intellectually stimulating and highly entertaining.