Getting over the feeling that Yiddish is just for old folks 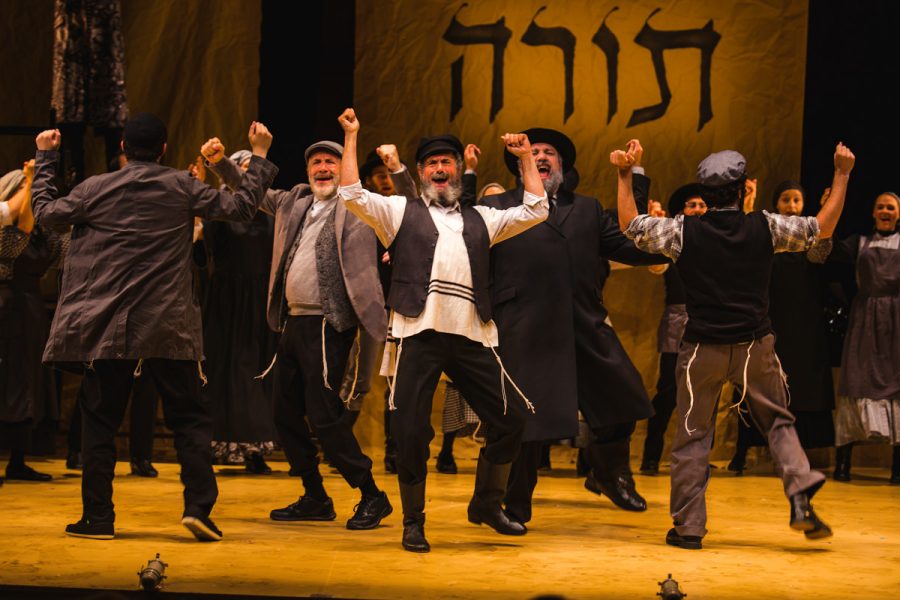 Steven Skybell, as Tevye (center, facing out) in the National Yiddish Theatre Folksbiene's Production of "Fiddler on the Roof." Photo: Victor Nechay/ProperPix

“This story was originally published on November 4, by the Forward. Sign up here to get the latest stories from the Forward delivered to you each morning.”

I’ve recently pondered: “When is a person old enough to flavor one’s language with Yiddish expressions?” There have been many times where a Yiddish expression was so on-target that I would use it, but I would always attribute it to my mother or grandmother, implying that Yiddish was only a language for older folks, as in: “My grandmother used to say she’s hocking me a tshaynik [driving my crazy].” Or, when explaining how to cook something, I might say: “My mother would add a bisl of this, and a bisl of that [a little of this and a little of that].”

So now I believe the time has come, as I have reached my Medicare birthday and have four grandchildren, to own up to those Yiddish expressions that have filled my mind, but have hesitated to say on my own. I envy my friend who uses Yiddish in her conversations with such confidence and ease. Maybe that’s because Yiddish was her mame loshn, her mother tongue; her family immigrated from Poland and spoke it freely and often. My parents, on the other hand, were American-born, so Yiddish became a language spoken by their own parents to hide secrets from the kinder, from the children.

Later my parents, especially my mother, began to use Yiddish phrases here and there. Now I’m ready too. I’ve already begun with my friends. We’ve been talking about buying a group home where we could all live together when we’re old, each having our own spacious quarters with hired staff to care for us all. I call this fantasy property the “Villa d’Khaye” (a pun on the Yiddish expression, vilde khaye, which means a wild animal, usually used when speaking about an unruly child!)

Recently, there was a summer rain storm that carried away the heat and humidity, leaving in its wake a clear sky and cool breeze, and I realized that the perfect way to describe this was with a Yiddish word. The word started bubbling on my tongue and begged to be said, but first I looked around and see who’s there. Do I chance taking total control or do I still need to reference my mother? No, I can do it, I decided. I walked outside, felt the relief from the horrid weather and with outstretched arms exclaimed: “Oy, a mekhaye! [What a pleasure!]” And it felt good.

I see my daughter listen to these expressions and there is a glint in her eye. She gets it. And I know one day she’ll feel that Yiddish phrase on her tongue, waiting to be expelled. Who knows, she might be experiencing it already, but right now my guess is, she probably still prefaces it with: “As my mother would say…”

“The Forward is an independent, nonprofit news organization dedicated to providing incisive coverage of the issues, ideas, and institutions that matter to American Jews.”