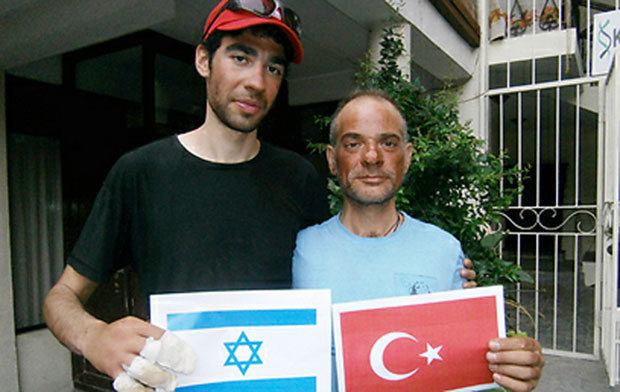 It may be the deadliest season on Mt. Everest yet, but the highest peak in the world found a hero in Israeli climber Nadav Ben Yehuda. Ben Yehuda, 24, was less than 1,000 feet from the top when he spotted unconscious Turkish climber Aydin Irmak sprawled on the snow-covered ridges. Giving up his chance to make it to the top, Ben Yehuda picked up Irmak and carried him eight hours to safety, saving his life. Ben Yehuda, who suffered frostbite and may lose a few fingers from performing the rescue without gloves or oxygen, also gave the world a happier story about Israeli-Turkish relations at a time when ties between the two countries are badly strained.

Last week’s season finale of “Saturday Night Live” is rumored to have been Andy Samberg’s last appearance as a member of the show’s cast — and if so, he will be missed. In his seven years with “SNL,” the Jewish funnyman and his goofy collegiate humor have helped keep the sketch comedy show popular among younger viewers. Samberg’s musical contributions to the show’s “Digital Shorts” segment yielded numerous viral video hits, whether he was rapping about eating cupcakes and catching a movie or professing his love to Mahmoud Ahmadinejad. (Check out 6 No Bacon’s 10 favorite Samberg videos.)

Rabbi Yisroel Avrohom Portugal may hail from the old country, but he has plenty to say about our brave new interconnected world. Portugal was a co-organizer of the rally that drew more than 40,000 haredim to the New York Mets’ Citi Field on Sunday to raise awareness about the threat that the Internet poses to their way of life. “Our children are being thrown into the fire,” the octogenarian Portugal said, addressing the crowd in Yiddish. “We have to put out the fire.” The European-born grand rabbi of the Brooklyn-based Skulen Chasidic sect, Portugal was credited with working tirelessly to unite the fractious haredi community behind the event.

It took Rabbi Adin Steinsaltz 45 years to translate the Babylonian Talmud from ancient Hebrew and Aramaic into modern Hebrew. Fortunately, we didn’t have to wait another 45 years to see an English version. The first volume of Steinsaltz’s Koren Talmud Bavli is being launched in conjunction with Shavuot, which commemorates the day the Torah was given to the Jewish people. The complete set will comprise 41 volumes. The first English volume comes two years after the release of his modern Hebrew version — and it even has color photos and illustrations.

When thousands of haredi men gathered at New York’s Citi Field stadium to rally against the dangers of the Internet, some on the Internet struck back, assailing haredi Judaism and its attitudes toward women. But Chaya Kurtz countered with an essay celebrating mikvehs and big-bearded husbands. “When you slam Orthodox Jews because you think you’re defending or somehow liberating the women of our communities, you’re actually doing us a huge disservice,” she wrote on the women’s site XO Jane. “When you slam Jewish men, you’re slamming us, too.” The article struck a nerve, drawing both praise and criticism, including from some who argued that Kurtz’s experience in Chabad doesn’t reflect the challenges faced by other Chasidic women.