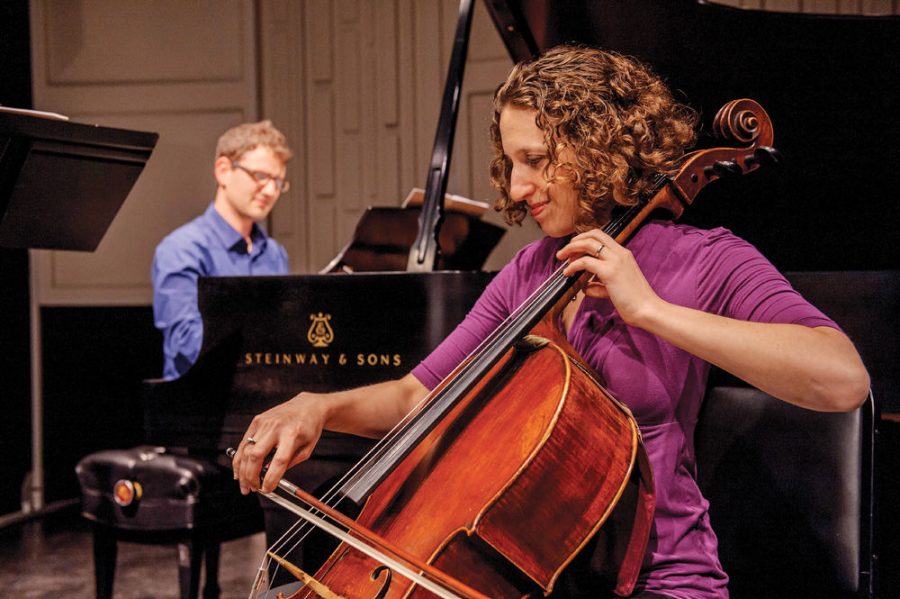 Sara Sitzer is an accomplished cellist who is a member of the Elgin (Ill.) Symphony and the founding artistic director of the Gesher Music Festival.

The Gesher Music Festival will return Aug. 10-19 for its eighth season of bringing professional musicians to St. Louis to perform chamber music with a “Jewish twist” or inflection.

In addition to a free family concert at the Ferguson Library at 2 p.m. Aug. 11, three other formal concerts (see box for information) will explore different aspects of this year’s theme, “Voices Rising,” each in a different venue.

The festival, a program of the Jewish Community Center, will also include a docent-led tour will examine the “Voices Rising” theme in the collections at the St. Louis Art Museum.

Sara Sitzer, 35, an accomplished cellist who is a member of the Elgin (Ill.) Symphony, is founding artistic director of the Gesher Music Festival. She also performs regularly with orchestras and ensembles including the Milwaukee Symphony and Chicago Opera Theater, as well as on Broadway in Chicago.  She spends her summers performing and teaching at the Wintergreen Summer Music Festival in the Blue Ridge Mountains.

Sitzer is the daughter of Bill and Kathleen Sitzer, former artistic director of the New Jewish Theatre.

How well do you think the Gesher Music Festival is living up to its mission to build bridges across the diverse cultures of St. Louis through engaging, inspiring, and immersive performances?

“Gesher” is the Hebrew word for bridge, and we build bridges in various ways throughout the festival. First, through our thematic programming, which uses classical chamber music as a means to connect the Jewish experience to broader cultures and global ideas. And second, through our community partnerships. Each year, the Gesher musicians visit a variety of venues around St. Louis to give free performances, from the Juvenile Detention Center to Covenant Place to the Ferguson Public Library to Central Reform Congregation.

What’s been the biggest challenge in growing the festival over the past few years?

It’s never easy maintaining momentum throughout the year for a festival that only takes place over the course of just over a week annually, but we’ve been extremely lucky in our wonderful partnerships with the Missouri History Museum and St. Louis Art Museum, our supporters at the Silk Foundation and Amado Foundation, and the incredible community support that seems to grow each year.

Is there a performance this year that you feel would best suit families, and why?

This year, we’re excited to be offering two family concerts that are geared specifically toward families with young children, one at the Ferguson Public Library and one at Temple Israel. These will be short, interactive, kid-friendly programs.

As artistic director, what do you hope audiences leave with after attending a Gesher Festival performance?

One of the things that makes Gesher really special is the thematic programming, and this year our theme is “Voices Rising,” which not only entails music written for the human voice but also explores the way that composers have historically expressed their own voices through music. My greatest goal is for our audiences to leave with a new perspective on a topic that is relevant to their own lives, simply from experiencing the music that we perform.

What’s something about you that most people would be surprised to find out?

Although I’m from St Louis originally, I currently live in Elgin, Ill., just outside Chicago. As with any major city, there are lots of great opportunities, so it’s a fantastic place to be a working musician. But I always think of St Louis as my home and miss living here.