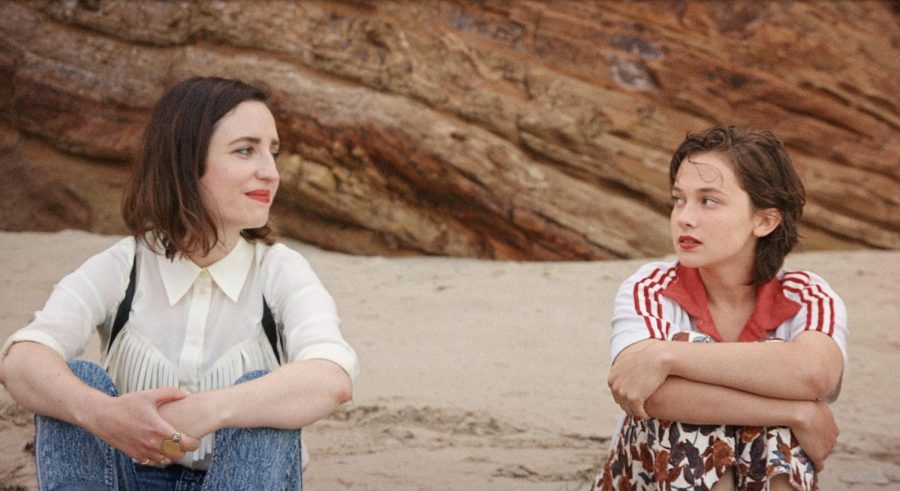 Zoe Lister-Jones doesn’t know how to not be Jewish. The actor-writer-director is no stranger to the indie film scene, having starred in movies like “Arranged,” a heartwarming but grounded story of friendship between Jewish and Muslim women, and collaborated with her husband, filmmaker Daryl Wein, on multiple projects. In 2017, she made her feature-length directorial debut with “Band Aid,” the story of a couple in a contentious marriage who start a band to channel their arguments into song; the film’s crew was, casually, 100% women. On television, Lister-Jones starred on the CBS sitcom “Life in Pieces” and played Fawn “I firmly believe that power emanates from the vagina” Moscato on “New Girl.” And if you’re a fan of the iconic 1996 teen witch film “The Craft,” you may recognize Lister-Jones as the force behind its 2020 sequel, “The Craft: Legacy,” which starred Cailee Spaeny as Lily, a high schooler figuring out her magic powers and her place in the world.

Lister-Jones and Spaeny reunited for the apocalyptic comedy “How It Ends,” but this time it was personal: Spaeny plays a younger version of Lister-Jones’ character, Liza, a woman who doesn’t quite have it all together but is determined not to spend her last day on earth by herself. “You don’t count,” she laments to her younger self, who follows her around L.A. despite tension and disagreements. “You’re metaphysical.”

After seeing the film at the virtual Sundance Film Festival this winter, I recently got the chance to talk to Lister-Jones about asteroids at the end of the world, Jewish humor, and how to have a frank conversation with your younger self.

This interview has been edited and condensed for clarity.

When I saw “How It Ends” at Sundance, I was so intrigued at the idea of having a younger version of yourself attached to you and following you around, even if it causes conflict. What was the genesis of that theme?

We conceived of the film pretty early on in quarantine, and I think I had been doing some inner-child work before, but it really kicked into high gear once I was trapped with myself in such an unprecedented manner. I think lockdown put into perspective so many of our unhealed wounds and with how we choose to address that; a lot of that boils down to how to talk to an inner child, and how to assuage that younger person’s fears. So much of that was amplified. I think the idea of personifying the inner child felt like an irreverent way to delve into some of these issues, with my character in literal conversation with her younger self.

It reminds me, honestly, of therapy, where you talk to yourself that way.

Yeah. I mean, my therapists, I feel they’re always telling me to write a letter to my inner child or learn how to talk to her, and I just never know what to say and it feels like this exercise where I fail miserably every time. So in many ways, this was me trying to figure that out.

I know you’ve worked with Cailee [Spaeny] before, but what was it like to go from directing her in a film like “The Craft” to watching her play you?

It was an interesting, sort of organic progression from “The Craft: Legacy,” even though they’re such wildly different movies. In “The Craft,” Cailee was playing a version of my adolescent self; I had written that story loosely based around an experience that I’d had moving in with my mom’s boyfriend when I was a teenager. So Cailee and I had done a lot of work around my adolescence, her adolescence, how even though we were from very different worlds, we have a lot of similarities. It actually felt like an extension, in some ways, of the work we were doing there. She would come to my house every week on “The Craft” and I would play every character and we would have so much fun. She’s just such an incredible screen presence.

Your idea of the end of the world is definitely more fun than what we were feeling when you were making the film in 2020. I’m wondering how you balanced the tone of the piece with the reality of making it in a time that was so scary?

I think I was so desperate to watch things that could bring some levity and the bleakness, things that didn’t deny the deep state of sadness and uncertainty. And I think for Daryl [Wein] too, this film was about navigating trauma in a way that feels escapist but also delves into the complexities of what we were all facing emotionally. We didn’t want to locate it in the pandemic itself, because I think we’ve all had enough of that in real life, but we did want to get a narrative that was adjacent. And we’re fortunate to have so many talented friends who are brilliant comedians. We set a challenge for ourselves and for our friends, that we could find a sense of play amid these very dark times.

I thought you said a Tinder egg and I was like, I don’t know what that is.

That’s a great idea though.

You heard it here first on Alma!

I think that “How It Ends” — like so much of your work, especially “Band Aid” —has this really quick-witted Jewish humor. Like when you learn that you won’t have to be lactose intolerant anymore in the next life, that killed me. Is that a concept you relate to, that comedy can be culturally infused?

Always. I mean, the first film Daryl and I made together was called “Breaking Upwards,” and the climax of the film takes place at a Passover seder. And then “Band Aid” and with this movie — there’s no way for me not to be Jewish. My Jewish stomach definitely comes into play with the characters that I write for myself. I also think that representation is incredibly important and to see Jewish women, especially, on screen, is important to me. Whenever I see a film that I feel seen by, it’s that much more meaningful. So I try to throw some dietary restrictions into every film to make people feel seen. [laughs]

I’m sure people have been asking you what you would do on your last day on earth. Do you think your answer has changed since you shot the film to now?

I guess I don’t think [my last day] would be so dissimilar from the characters in the film, just connecting with the people that I love, eating a shitload of pancakes, and there wasn’t a dance party in the movie but I think that would be part of it. Drugs, dance, eat, sexual escapades that feel fulfilling and not empty — which are hard to come by, but it’s the last day, I think people are gonna have to show up.

I don’t want to get too philosophical, but “How It Ends” is about the end of the world, and I almost wanted to know — is it going to be a big nothing after? Is the guy who said the asteroid’s a hoax right? Do you have thoughts about what happens to Liza?

Well, we sort of joked about making a sequel that takes place in the afterlife, so stay tuned. I’ll be eating a lot of cheese.

“How It Ends” is now streaming and in select theaters.