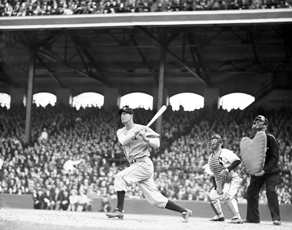 Hank Greenberg is among the baseball greats included in “Jews and Baseball: An American Love Story,”which opens this year’s St. Louis Jewish Film Festival held by the Jewish Community Center.

By Burton A. Boxerman, Special to the Jewish Light

Did you know that Lipman Pike was the first Jew to play professional baseball, or that Barney Pelty (the Yiddish Curver) was the first Jew to have his picture on a baseball card, or that Mose Solomon was nicknamed the “Rabbi of Swat?” Information such as this and much, much more, is part of the highly acclaimed baseball movie, “Jews and Baseball: An American Love Story.”

Of course, a 91-minute movie certainly cannot fully explain when, how, and why the Jewish people became so enamored with the sport. Nevertheless, this well-written and enjoyable film is able to show the courtship between America’s National Pastime and Jewish Americans by employing newspaper clips, as well as narratives by both baseball historians and actual major leaguers.

The film meticulously illustrates what motivated Jews to take an interest in baseball, and how assimilation of Jews into the mainstream of American society affected this interest. The film also details the problems the earlier Jewish players faced after they made it to the major leagues, and how this attitude, for the most part, has changed today.

Al Rosen is considered one of the first great Jewish baseball stars, and his comments in the film are both poignant and pertinent. The film describes his promotion to the major leagues, a defining moment for Jews. Although his career was relatively short, his contributions to baseball are considered quite important. He was also the first Jewish player to physically challenge non-Jewish baseball players who made disparaging remarks about Jews.

The two Jewish players who are in Baseball’s Hall of Fame, Greenberg and Koufax, both appear in the film, and play an integral role in the story of the contribution of Jews to baseball. The movie calls Greenberg “the first Jewish hero in baseball” and discusses the four critical aspects of Greenberg’s baseball career-his battle in 1938 to break Babe Ruth’s record of 60 home runs in one season; his refusal to play baseball on Yom Kippur; like Rosen, his audacity to face those players who questioned his religious background; and the friendship and respect he gave Jackie Robinson during Robinson’s rookie year in 1947.

The film describes Sandy Koufax as the most respected major league player and the smartest pitcher of his time. He exuded so much confidence when he took the mound that he expected to pitch a no-hitter every game. Koufax’s refusal to pitch on the High Holy days was also fully discussed.

One of the concluding lines in the film seems to sum up the theme here very well-“Jews still continue to get a sense of pride when other Jews do well.”