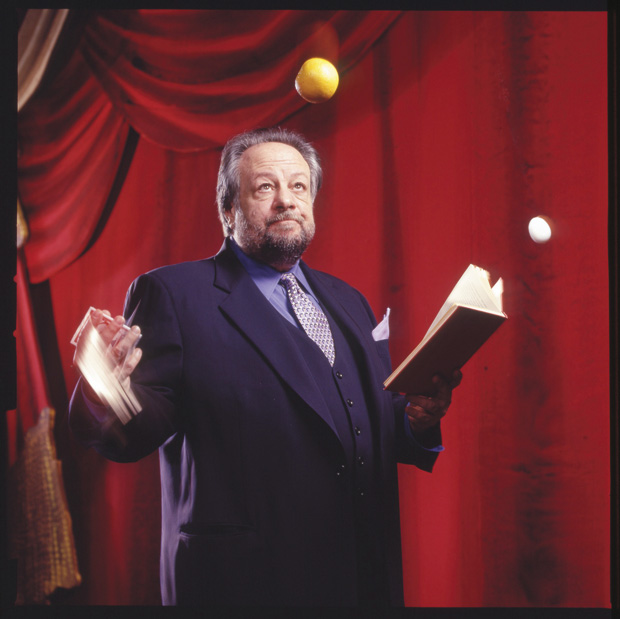 Ricky Jay is a preeminent sleight-of-hand magician, historian of magic and oddities, author and actor, but the man with the cards himself is more a mystery. In “Deceptive Practice: The Mysteries and Mentors of Ricky Jay,” the magician reveals a bit of himself but more about how he learned all those tricks, along with something of the history of magic in the past century.

This surprisingly engrossing documentary is the St. Louis Jewish Film Festival’s bonus film this year. The showing will be preceded by an introduction and live performance by Shep Hyken, a local magician and entertaining inspirational speaker who has a bit of Ricky Jay in him, too.

“Deceptive Practice” had been scheduled to open in St. Louis but it now appears this will be the only chance for local audiences to see it. Even if you have little interest in magic, Jay’s hypnotic approach and skill as a consummate showman will keep you riveted.

The film is more of an exploration of magic as Jay learned it and of his career than it is a biopic, although it does explore his close relationship with his grandfather Max Katz, who introduced him to magic. Jay is the acknowledged master of close-up magic and, like his sleight-of-hand, he only lets you see what he wants you to see in this film, entertaining us while retaining an aura of mystery.

Filmmakers Alan Edelstein and Molly Bernstein followed Jay for years making this film and use a combination of interviews, particularly with Jay but also with people who know him, as well as archival photos and film footage, to explore Ricky Jay’s craft and artistry. We see footage of Jay performing today, as well as rare footage of other once-famous magicians who influenced him, including Al Flosso, Slydini, Cardini, Dai Vernon and Charlie Miller.

The magician’s technique is to talk about the history of magic or a sleight-of-hand trick, while he is actually doing the trick. The patter serves as misdirection for the magic but Jay is engrossing enough as a speaker, he could fill auditoriums on that basis alone. In fact, the film opens with the magician performing, engaged in light patter with the close-up audience, telling them “If I could go back in time — and I can…” a perfect demonstration of Jay’s signature mix of humor and mystery.

Jay’s magic career started early. Young Ricky Potash, his real name, first performed at age 4 and was already a professional at age 7.  The film includes footage of the 7-year-old pro performing magic tricks on TV. Little Ricky had been introduced to magic — and magicians — by his multi-talented grandfather, a unique figure himself. As the film tells us, Max Katz came from Austria to settle in Brooklyn, became a self-taught accountant and wrote books on several topics, ranging from checkers to pool. Katz, a serious amateur magician, was the accountant for several big-name professional magicians. Grandpa Max arranged for magic lessons for little Ricky with some of these pros and even a bar mitzvah performance by his favorite magician.

Playwright/director David Mamet, who has collaborated with Jay on several films, is among the interviewees. The magician often appears in Mamet’s or Paul Thomas Anderson’s films as a trickster presence. Jay first became known in the ‘70s, performing as an opening act for touring rock concerts, at the same time Steve Martin became famous doing stand-up comedy as an opening act also. The film includes archival footage of Jay on the Dinah Shore show with Steve Martin demonstrating 3-card Monte.  Along with Mamet and Martin, other famous performers and magicians are featured in the documentary.

As the film unfolds, Jay introduces us to some intriguing magic facts and an array of great magicians, including those who mentored him. He talks about how great magicians learn their craft, magic’s overlap with con men and scams and the secretive nature of professional magicians.

Like all professional magicians, Jay doesn’t reveal how he does his tricks but the film reveals intriguing tidbits about magic and magicians, about how magic works and the art of misdirection. Jay reveals less about his personal life, retaining his aura of mystery, but a great deal about magic itself, enough to please anyone interested in either magic or Jay’s career.

At 90 minutes, “Deceptive Practice” is a delightful, eye-opening quick trip through Ricky Jay’s world of magic.