Fight summer isolation: Take a vacation in a good book 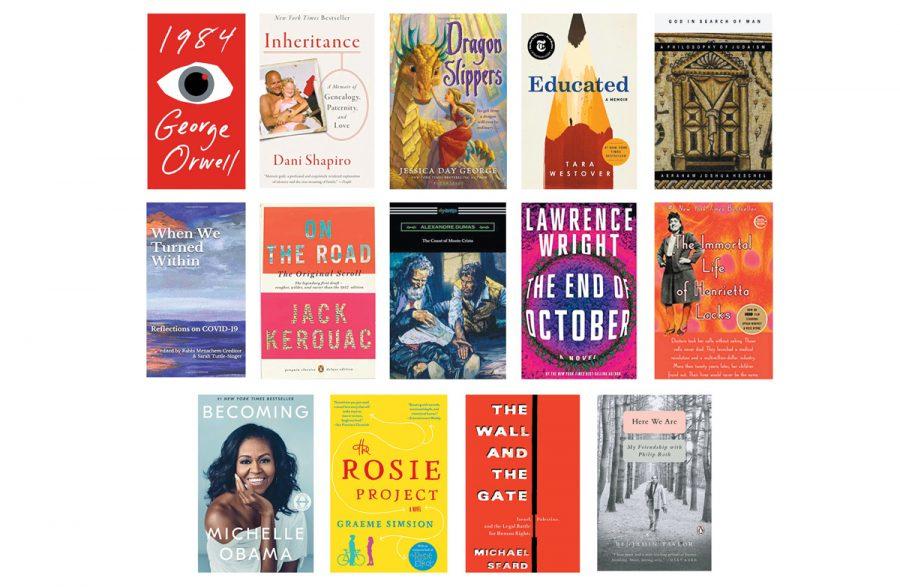 By Kate Robbins, Special to the Jewish Light

With COVID-19 keeping us stuck inside this summer, a good book has become more important than ever. A book can transport you into another world without ever leaving the house, and the St. Louis Jewish community has lots of great books to recommend. From autobiographies to fantasy to nonfiction, there’s something for everyone.

The Jewish Light reached out to a few avid readers to ask what they have been reading recently and to suggest some of their old favorites.

A congregant, probably in April, we had a conversation and we were just talking about books, and she asked if I’d read those books (“Becoming” by Michelle Obama and “Educated” by Tara Westover). I said no, and I gave her a book suggestion as well. And then all of a sudden in May, these two books showed up at my house. She’d ordered them for me!

I was reading (“Becoming”) when all the George Floyd stuff and everything started blowing up. It was very interesting to be reading it at the same time and hearing Michelle Obama’s stories and the racism she experienced in her own words.

“Educated” is totally different. Basically, the entire book is how she grows up in her Mormon community and how she gets out. She’s somebody who, for lack of a better word, survives her upbringing and, through education, her world is changed.

I just picked up the new “Huey P. Newton Reader” [published] by Seven Stories Press. And as far as who is Huey P. Newton, he’s the co-founder of the Black Panther Party. He’s a really interesting, nontraditional academic, and if you look at what he’s saying in the late ’60s and early ’70s, you can see the direct correlation with what’s happening now. This happens a lot with Black liberation authors, these ideas aren’t new that we’re seeing in the Black Lives Matter protests and George Floyd protests right now. But reading Huey P. Newton, I was just reading it last night, and it’s shocking to see an almost prophetic notion of what is happening now.

I think my favorite book is “On the Road” by [Jack] Kerouac. When you look at how it was written, he wrote it on a scroll of paper. It wasn’t on pages, there wasn’t that much editing. It’s mainly true stories with some names changed because you can’t go around saying prominent authors of the day and this is where and when you did drugs with them. But I think that one’s an interesting look at struggle. It deals with the idea of white privilege, especially white male privilege, and becoming an ally of people.

I’m just finishing up a book called “The Rosie Project” by Graeme Simsion. The narrator is someone with Asperger’s that doesn’t know he has Asperger’s. It’s a good story about how we look at others and how we look at ourselves – how we’re not locked into our genetics or our preconceptions about ourselves as well as others.

The book that’s taken the most enjoyment from over the course of my life is “The Count of Monte Cristo” (by Alexander Dumas) which I read as a kid and I’ve read over and over again through the years. It’s a wonderfully told story of responding to injustice and overcoming impossible obstacles. I think any young person should read it, it’s just a wonderful story.

I just finished “Let the Great World Spin” by Colum McCann. There are several different storylines, which, of course, end up intersecting, framed by Philippe Petit’s walk across the tightrope between the Twin Towers almost 50 years ago. The writing is lovely, the ways in which the stories come together are in turn satisfying, unexpected, enlightening, and the book is imbued with a rare generosity.

In the car, I listened to “The Secret Life of the American Musical” after abandoning another book that always seemed to be on the verge of getting better but didn’t, disc after disc.

What I just started today is “When We Turned Within: Reflections on COVID-19.” It’s selections by rabbis and a few Jewish educators and other Jewish professionals of what it is to be living in the COVID era. They’re short, sort of punchy collections, some are aimed at the High Holy Days, some poetry, prayers, all addressed to issues in and around the pandemic. They’re beautiful little pieces.

There’s a wonderful book out by Benjamin Taylor, who used to be on the facultyof Washington University. Its title is “Here We Are: My Friendship With Philip Roth,” and it talks about the friendship he struck with Roth that started in 1984 and lasted until Roth passed away. It’s very affectionate and informative, and fairly brief so it won’t take up your whole summer to read it, but I’m enjoying it immensely.

I’m a Philip Roth fan, so one of my all-time favorites is a book he wrote called “The Facts: A Novelist’s Autobiography,” which was one of his two attempts at autobiography. And in that book, he makes reference to my article from the 1970s interviewing his stepson. I sent [Roth] a copy of the book for him to autograph, and he sent me the autographed copy back with a typewritten note, which is one of my treasured possessions.

My wife and I also read the funny pages just to get our mind off the grim news. But even some of our favorite comic characters are wearing masks because of COVID.

Miriam Silberman, a sophomore at Washington University majoring in biology and psychology:

One that I just finished is “The Immortal Life of Henrietta Lacks” by Rebecca Skloot, who is a Jewish author. It was super good although it was a little long, and it gets pretty technical because it focuses on cells and the contributions of a Black woman’s cells to science. But it’s really insightful and, I think as someone who’s in STEM [science, technology, engineering and math], something we tend to overlook is people of color’s contribution to science, especially Black people’s contribution to science. I think the book was really eye-opening in that regard, so I would really, really recommend it.

[One of my favorite books is] called “Dragon Slippers” and I’ve read it like 18 times. It’s by Jessica Day George. It’s a pretty fast read. It starts out with that very classic setup, maiden being sacrificed to a dragon so she’ll be saved by a knight, but she meets the dragon and she befriends him. In this world, dragons hoard things, but not necessarily gold, like the main dragon hoards shoes. I thought it was super cute when I was younger, and I feel like it’s great for all ages. You can read it and really enjoy it when you’re 19 or 20 and also when you’re 13. I really love this one.

If there’s one thing I’d like to say to Jewish teens, is don’t be afraid to step out of your comfort zone when it comes to reading books. I think part of, for me at least, having a very strong Jewish identity was realizing that I wasn’t other identities like, looking into and learning about the stories of other religions and what they do and realizing I identify closely with my own.

It’s a memoir called “Inherited: A Memoir of Genealogy, Paternity and Love” by Dani Shapiro. It’s really good. She takes a DNA test and finds out that she’s adopted. She finds out some things about identity and the real meaning of family. I don’t want to give up too much detail because I want people to read it.

I also read “The End of October” by Lawrence Wright, and it was really scary because it’s about a pandemic, and it’s much worse than the pandemic we’re going through, but it’s just amazing how similar how many of the things were in it.

Rabbi James Bennett of Congregation Shaare Emeth: “The Wall and the Gate (by Michael Sfard)” is a book I’ve been reading. It’s a difficult book to read. It’s both difficult that it’s serious issues, both legal and ethical issues in the realities of the Israel-Palestinian conflict, and I’ve been reading it for a number of months. It’s a kind of thing that I really have to think a lot about. I love it, I find it very powerful and very important.

Many of the books I read are my favorite. The sign of a good book for me is when I turn to the last page of the book and I go, “Wow. That’s my favorite book!” And then I go on to the next book that I love.

Right now, I’m reading “1984” because I feel like everybody my age has read that and I haven’t yet. So I started it last Shabbat, and I’m like 70 pages into it. It’s kind of different from what I usually go for, but I grew up reading YA [young adult] novels that were very dystopian-oriented, and this one was written in 1949, so it’s interesting to see how the style differs between something that’s much older versus what I’ve read that’s much newer.

I usually choose something with a Jewish theme, I’m always interested in learning more and lucky for me, the Wash U Jewish community is full of a ton of super, super smart people, and they’re all really well read and able to make good suggestions for me.