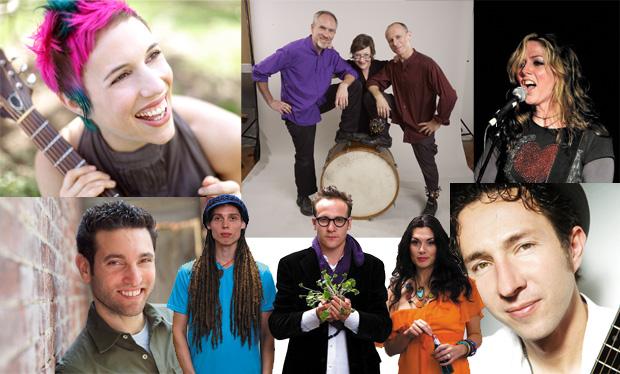 By Barry Gilbert, Special to the Jewish Light

About 13 years ago, Rick Recht discovered that his musical gifts could be used for more than simply entertaining a secular audience. That epiphany has led to an Internet radio station that streams Jewish rock music, a leadership training organization and a music festival that this month will add St. Louis to a list that includes some of the nation’s biggest cities.

The St. Louis Jewish Community Center and Chesterfield-based Jewish Rock Radio will present the inaugural RockFest National Music Festival on Feb. 17 at the JCC in Creve Coeur. It will feature some of the genre’s biggest stars, including headliner Billy Jonas, in a family-friendly series of concerts as part of the JCC’s annual Festival of Jewish Life, which will run Feb. 16-21.

Recht, a native St. Louisan, will not perform at RockFest, but his signature will be on the event as founder and executive director of Jewish Rock Radio (www.jewishrockradio.com).

RockFest “is a major community event for St. Louis, something that St. Louis has wanted for years,” Recht says. “There are (Jewish) music festivals in Chicago and (Washington) D.C. and Houston and Dallas and L.A. and San Francisco and New York and Atlanta. This is going to be a major festival that is extremely welcoming for families and people of all ages.”

Recht said that when his career as a touring Jewish musician began, it became clear to him that in the Jewish world, he was an educator.  Music and technology were among his vehicles.

“These are powerful ways to educate and inspire and interact with people of all ages, not just youth,” he says.

Jonas, a singer/songwriter and percussionist who uses found objects – pots, pans and beyond – in his music, says Recht’s Chesterfield-based Jewish Rock Radio is part of a “broader renaissance” in Jewish music and education.

“It’s one of the institutions that’s leading the charge into this renaissance of contemporary Jewish music that’s meaningful to multiple generations,” he says. “Jewish Rock Radio, in combination with other things, like Hava Nashira, a song-leader conclave up in Wisconsin, and other things like that have helped re-energize and re-inspire me just like it has a broad swath of the Jewish community.”

Recht started the nonprofit Jewish Rock Radio to address messaging and mass communications among Jews and Jewish organizations, and to address leadership training. “We use the Christian world as our analog because they’re doing it very, very successfully,” he says.

RockFest, funded in part by the Lubin-Green Foundation, is a featured event of the Festival of Jewish Life and is entwined with Recht’s Songleader Boot Camp (see sidebar), which is being held at the JCC from Feb 17-19 but is not part of the Festival of Jewish Life. However, some of the performers at RockFest are leading sessions at the boot camp, and RockFest will cap off its first day.

“We have these great artists and educators in town to help lead workshops and sessions, and it works out really great to have them in the same location where they can play as part of the festival,” says Rachel Brown, spokeswoman for both Singleader Boot Camp and Rockfest.

RockFest activities will include more than music. A Rockin’ Sandwich Smackdown competition will challenge contestants to build the “Best Kosher Sandwich,” and that food will become the festival’s fare, served by the winners.

“We also have a social action component,” Recht says. “For the winners of the sandwich smackdown, there is a prize of several hundred dollars that they can contribute to their favorite charity or Jewish organization.”

Festival doors open at 3 p.m., and the first performance, by Shira Kline at 3:30, will be for little kids. It is co-sponsored by PJ Library, an organization with branches throughout North America that provides free books and CDs to Jewish children and their families. Recht is the national spokesman for PJ Library, which is sponsored here by the Jewish Federation of St. Louis. Other local organizations, including religious and day schools, will be paired with performers and will appear onstage with them.

The performers, who will jam together onstage during the festival finale, are:

Kline (performing at 3:30 p.m.): A musician, blogger and educator, the New York-based Kline has released four rock albums for kids under the name ShirLaLa, including the most recent “Earth Worm Disco.” She is a founder of Storahtelling: Ritual Theatre Revived, and teaches at the Hava Nashira Music Institute.

Jay Rapoport (4:20 p.m.): A camp director and teacher, Rapoport likens his piano style to that of the Ben Folds Five and Billy Joel. His original songs are based on Jewish values and stories; his most recent CD is “With All Your Heart.”

Naomi Less (5:40 p.m.): An activist, worship leader and educator, Less, of Brooklyn, N.Y., is the founder of Jewish Chicks Rock and Jewish Kids Rock, and of Storahtelling. She says on her website that she is dedicated to music that “promotes the full inclusion of un-objectified girls and women in Jewish rock music – and all music, for that matter.”

Mikey Pauker (6:20 p.m.): Pauker’s “Jewish Cross Over Music” has earned him accolades for his musical and educational efforts. Writing from his experience as well as Jewish sources, Pauker’s “Sim Shalom” and “Hinei Mah Tov (Eeoohh!)” has been included in songbooks and compilations. He has shared a stage with Matisyahu and is artist in residence at BBYO’s CLTC summer program in West Virginia.

Jonas (8 p.m.): Jonas and his band (at RockFest he’ll be a trio with Sherman Hoover and Ashley Jo Farmer) mix mainstream instruments with “found” and homemade instruments that can range from buckets to bells. His music began on the folk circuit in the ‘90s, but he also was performing in synagogues.

“I found that the concert performance experience is similar to the sacred ritual performance for me, in that we come in as strangers and are transformed through the common experience of opening our minds and our hearts together,” Jonas says.

Jonas grew up playing piano, trombone and guitar, but he had friends in high school who were not musicians who enjoyed playing rhythms on whatever was handy. Later, during the ‘90s at Oberlin College in Ohio, Jonas was a founder of the Big Bang Theory, a band built on found, foraged and homemade objects. Jonas says audiences respond to the accessibility of music played on everyday objects.

“People say, ‘Hey, he’s using common household things, I can do that,’” Jonas says. “I love that feeling that it seems to give to people. It’s amusing to them, it’s unexpected, it pushes their wonder button, which is what I love to do.”

Jonas and the other RockFest performers also will have given a live Web concert on Jewish Rock Radio. The Rock Your World series on Wednesday evenings features an artist, performing unplugged and paired with a Jewish social action agency. Fans can also chat with the artists via the stageit.com interface. The final two concerts will feature Less tonight (Feb. 6) and Kaye on Feb. 13. The 30-minute shows begin at 7:30 p.m.; a pay-what-you-can ticket is required.

The festival also will be live-streamed – audio and video – on Jewish Rock Radio.