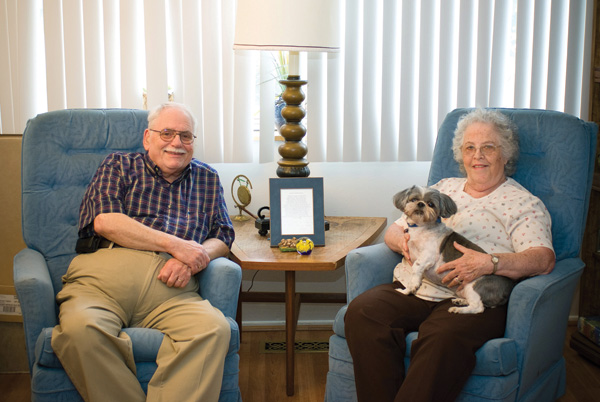 Hilton and Carolyn Epstein with thier dog, Daisy in their Creve Coeur home. NORC helps the Epsteins continue to live on their own as they get older.

When Sheldon Katz died in his sleep four years ago, it deeply saddened those around him, but if Lois Perryman could take comfort in at least one aspect of her father’s passing, it was the smile on his face. Even the emergency workers who arrived at Katz’s bedroom that morning commented on his serene expression, she said.

“My father died in his own home, in his own bed, peacefully,” Perryman said, stressing that he had lived out his final years independently rather than in an assisted living facility as many seniors do.

It was something his grandchildren had noticed.

“My children said grandpa was so lucky,” she said. “They saw the difference.”

The difference that meant so much to Katz was anything but luck. It was the result of an ongoing effort to change the way policymakers locally and across the nation think about issues of aging. In 2002, those efforts coalesced to form the St. Louis Naturally Occurring Retirement Community or NORC, part of a federally-funded pilot research program designed to bring services to seniors where they live.

“We were one of the first five communities in this national demonstration initiative,” said Karen Berry Elbert, manager of the St. Louis NORC. “It’s sup porting independence and healthy aging. That’s the purpose. Keep people engaged in the community, keep them active and that will promote longevity.”

NORCs were the offspring of a convenient marriage between natural demographic trends and an expressed desire by seniors to stay in their own homes and communities. According to 2005 survey figures from the American Association of Retired Persons, nearly nine out of ten older adults want to stay in their home as long as possible.

“Back in the early 80s, this phenomenon was really focused on and many aging services networks felt that there could be benefits by targeting to where the older adults are living,” said Robert B. Goldberg, senior director of legislative affairs for Jewish Federations of North America. “Many of those people are aging in place. They need and want services to help them.”

But research found that seniors weren’t just aging in place. Census data showed they were largely aging in the same place. Goldberg said figures indicate that as many as one-third of older adults are in a NORC, making the targeting of services to a limited geographic area a logistically viable option. Spearheaded by the Jewish community and backed by federal funding, that idea spread quickly from its birthplace in New York State and began to be replicated in other parts of the country. Today, Goldberg said 50 Jewish federations in 26 states are involved in some variety of NORC programming.

St. Louis has been at the forefront of that movement. Sponsored by the federation here, the local NORC provides bus trips to area sites, film series opportunities, wellness screenings and workshops, yoga classes and a significantly reduced fee for seniors to join the Jewish Community Center. It even offers discounts at neighborhood business establishments. The original federal grant has long since run out but the St. Louis NORC has continued with a quarter million dollar budget subsisting on a creative blend of state funding, individual contributions, foundation and endowment support and memberships, which are offered at $30 a person or $45 per couple. About 650 residents have joined with about 1,600 to 1,700 on the organization’s mailing list. In 2006, the original one-square-mile area expanded from a small tract hugging Guelbreth Lane, to a roughly three-mile stretch bounded by Craig Road on the west, Villa Dorado Drive on the north, Lindbergh Boulevard on the east and Olive Boulevard on the south.

“St. Louis has been part of our national initiative as a participant early on and they’ve proven to be a strong program able to sustain itself through community efforts,” Goldberg said. “It’s an example of how a community can become independent.”

‘A friend you can call on’

Hilton Epstein loves to show off his new back steps. About a year and a half ago, his wife Carolyn was having trouble making her way up to the door from the couple’s sloping backyard. The Shaare Zedek congregants who live in an unincorporated area just north of Olive knew they needed help. They called NORC and soon Washington University’s Occupational Therapy program arrived at their door to build new rear steps for the couple. Since joining after the NORC’s expansion, the Epsteins also found a volunteer to fix their front porch light, acquired a jar opener, had a basement stair railing installed and received a kitchen fan, all courtesy of NORC. Some services are free. Other times NORC puts a member in touch with a reputable individual who will handle the work for a price. NORC even called to check in with Carolyn when her husband was in the hospital with an illness.

Hilton is effusive in his praise. The 74-year-old called NORC “a breath of fresh air.”

“Probably the thing that helps seniors the most is that if you need something done that you can’t do anymore because of your age, they’re there,” he said. “There’s that friend that you can call on.”

He said any eligible senior who doesn’t get a membership is “foolish.”

“If I need anything done, NORC is there to assist me, to let me live in this house that I’ve been in for almost 40 years that I dearly love,” he said. “My wife and I are not dependent on anyone else.”

NORC administrators are happy to hear stories like that of the Epsteins.

“Everyone calls it the best deal in town,” said Peggy Neufeld, St. Louis NORC researcher and community liaison. “It’s really there to help people stay and age in their own home as long as they desire to. To do that, we have to help people to age healthy and stay connected to their neighborhood because we feel that will help people get the resources that they need.”

Elbert, who has headed the program for the Jewish Federation from the beginning, said that the proof is in the numbers. A five-year program evaluation of the St. Louis effort revealed that more than three quarters of NORC residents said they have learned more about resources available to them, while 52 percent said it had helped them continue to live at home. Just under half said the program had positively impacted their health.

Elbert also noted that while the national rate for nursing home placement is 4.5 percent, it runs slightly higher in Missouri at 4.8 percent. Yet within the NORC, placement rates are less than half that.

“The thing that makes the program truly significant is the impact data,” she said. “I think frankly that this is the wave of the future. All the research supports people wanting to age in place. You can look at any national study and they will all say the same thing.”

Like the Epsteins, Libby Sorkin Routman, a congregant at B’rith Sholom Kneseth Israel, took advantage of the home safety inspection offered by NORC partner Washington University and was able to make modifications to her bathroom, including the addition of grab bars to her shower to prevent falls. When Routman was bedridden for nearly six months with an illness, NORC was there to connect the 79-year-old to the proper resources.

“She told me about the JCC nutrition services so I could get meals delivered at home,” said Routman of the NORC representative she spoke to. “They have just a wealth of knowledge as far as helping you with contacts for different things like that.”

But it isn’t all about service agencies. Social connections are another variable in the NORC equation. Routman said she enjoys the film series and day trips to local cultural events ranging from the Gateway Arch to the Lincoln Library in Springfield, Ill. to an Amish enclave in Missouri, all of which allow NORC members to meet and interact with one another.

Elbert’s five-year assessment figures back that up. Nearly half of respondents said they had made new friends through the NORC and that it had helped them to get to know their neighbors better. It’s a fact increasingly on the mind of all Baby Boomers as they approach retirement but of special concern to Jews.

“Supporting the elderly has always been a top priority of the Jewish Federation, and the Jewish population, as we know, is aging at a faster rate than the general population,” said Elbert, “so it certainly makes sense that the Federation would take the lead on this.”

While Baby Boomers may be thinking about issues of aging, Goldberg said they aren’t always aware of what’s available – and what isn’t.

“Ultimately, programs like ours will be critically important as partnerships at the community level will be required to sustain our aging populations,” he said. “Most people believe that there is a long-term care system available to them when they retire and it really doesn’t exist.”

Unfortunately, non-existence remains a threat for NORCs nationwide. In New York, state funding for the idea is hardwired into the annual budget but NORCs elsewhere must compete with many priorities in a tight fiscal environment.

“It’s a struggle when states and localities that would otherwise be eager to participate are suffering from a reduction in tax revenue because of the economic downturn,” Goldberg said. “There has also been a reduction in charitable giving so these community projects do struggle.”

For her part, people like Perryman hope it’s a struggle the NORCs will win. At 69, she is proud to call herself a second-generation NORC member. Originally introduced to the organization when she began accompanying her late father on trips, she quickly found she enjoyed the adventures and the camaraderie. There was even an occasional group that met to discuss the challenges of caring for an aging parent, something that was important to Perryman, who had moved in to care for her father. But it isn’t only interaction with seniors that she likes about NORC. It also allows her to talk with the young volunteers who come by.

“I think we get the richness of college students,” she said. “The main thing is to have them sit down and I just want to hear about their life a little bit, what they are studying. They are away from home and they get to know us.”

Perryman still lives in the home she shared with her father, who she said was still doing NORC activities the week he passed away. It can be tough to take care of a three-bedroom house, of course, but the challenge doesn’t daunt her.