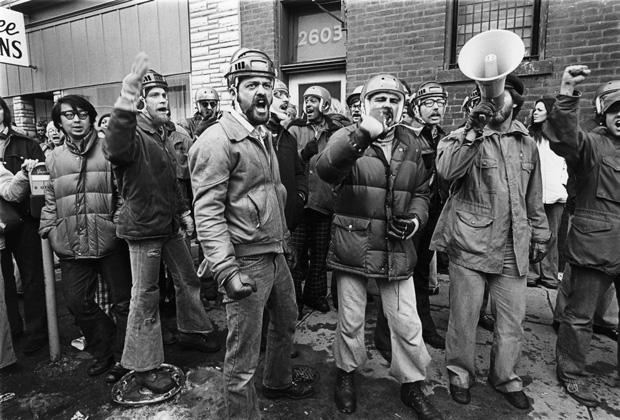 A photo from the ‘Standing for Justice II’ exhibit shows a demonstration against a National Socialist White People’s Party march in south St. Louis in 1978. Photo: David Henschel

An impassioned address by an ex-congressman and civil rights pioneer marked the start of a new exhibition, “Standing for Justice II,” at the Jewish Federation Kopolow Building Sunday afternoon.

“We were sick and tired of being sick and tired,” former Rep. William L. Clay told a packed auditorium at the Holocaust Museum and Learning Center as he told of the effort among African-Americans to gain equality and economic opportunity in St. Louis during the 20th century. “Gradualism lost its legitimacy as a strategy. Our new slogan was: ‘Freedom now and jobs now.’ ”

Clay’s talk was the highlight of this weekend’s assemblage to mark the opening of the exhibition. It is the latter half of a two-part historical exhibit marking the Jewish community’s role in the local battle against racist extremism.

The first installment, which covers 1930-1950, is housed in the auditorium. The second, in the atrium of the Kopolow building, includes later materials dating up to about 1980.

By turns humorous and historical, Clay’s address focused on the fight of local African-Americans against institutional discrimination. The 16-term congressman, whose son William Lacy Clay Jr. holds his former seat, spoke at length about three major events for civil rights in St. Louis, beginning with a 1911 political meeting at which local minority leaders demanded, and received, greater representation in government and business, and later, the founding of Homer G. Phillips Hospital. This longtime health center for African-Americans on the city’s north side not only served as a training ground for black doctors and nurses but was also a beacon of opportunity in other ways as well. It closed in 1979.

Economic opportunity also figured prominently in the third incident Clay identified, one in which he played a role — the famous Jefferson Bank protest. The event, which marked its half-century anniversary last year, was a watershed in the history of civil rights in St. Louis. Aimed at promoting minority hiring at the bank, the demonstration ultimately did just that after the bank was targeted by picketers drawn from all walks of life, from students to professionals.

“Our generation threw down the gauntlet,” said Clay, who was among those arrested at the event. “We refused to tolerate in silence a system in which far too many ignored the pervasive insensitivity of businessmen and politicians. We exposed the silence and callous hypocrisy of religious leaders casually refusing to confront the immorality of wholesale racial discrimination.”

Clay said the protest had a number of notable effects, including shattering a previously pliant civil rights establishment in the city and gaining a seat for younger black activists at the power structure’s negotiating table. It also boosted economic opportunity. After the protests, doors opened not just at the bank, but also at insurance companies, department stores and hospitals where hundreds of minorities found jobs.

It ultimately led to a new job for Clay himself, who was among a rising generation of local black politicians attaining office after being catalyzed by the protest.

“The landscape of the civil rights movement underwent major surgery and drastic redesign,” he said.

After Clay’s speech, attendees were able to meander among the archival panels on display in the newly unveiled presentation on extremism.

Some of the exhibit, comprising letters, media clippings, photos and memos, focuses on inspiring or interesting responses by the Jewish community to the growing scourge of hatred. Yet much of the materials highlight disturbing ephemera from aspects of history many might prefer to forget. “JEWS TO BLAME” blares one headline from a 1973 white power publication once found in an elevator at the Delcrest Apartments while another item, from four years later, lauds Adolf Hitler as the greatest man to ever live. A nearby flyer urges freedom for Rudolf Hess while a full-page cartoon pushes a “Buy Aryan” campaign complete with an accusatory Uncle Sam asking the reader “How many stores in your area are Jew-owned?”

Other items were messages intended for a Judaic audience; most contained the implication of violence. These include a reproduction of a bomb threat sent to the home of one prominent Jewish citizen as well as tiny Nazi-logoed stickers with notations like, “The Jews are thru in ’72.”

“These things just started appearing in the community,” said Diane Everman, archivist with the St. Louis Jewish Community Archives, which is housed at the Saul Brodsky Jewish Community Library. “People would walk outside and there’d be one slapped on their business.”

Based largely on the Jewish Community Relations Council archives, the collection itself is extensive, with the exhibit panels being drawn from more than 110 cubic feet of material stored by the library.

Everman said it was interesting to note the differences between the two exhibits. For instance, references to alleged Jewish influence in communism were common in the 1930s and 1940s but fell somewhat out of favor with the following generation of neo-Nazis, a trend the archivist finds curious.

“It was a very prominent part of the accusations in the period up to the immediate post-WWII and then we realized as we were putting this one together that that theme surprisingly dwindles away,” said Everman. “With the McCarthy hearings and all that, you’d think that it would be much more prominent.”

Dan Reich, curator and director of education for the HMLC, also notes another difference between the presentations, namely the changing focus of Jews themselves who were increasingly active in the Civil Rights movement to promote the rights of all people.

“In part one, there is a larger focus on anti-Semitism and Jews being excluded from professions, housing, opportunity, recreation, issues regarding the Red Scare,” said Reich, “but there seemed to be a shift after the war where JCRC took on greater issues, not just of discrimination against the Jewish community but against women and African-Americans and really forged coalitions to combat that.”

Barbara Raznick, director of the Brodsky Library, said the exhibit serves a vital role in recalling what has come before so a new generation can learn.

“It is so important to remember our past so that we don’t make the same mistakes and to know where we came from,” she said.

Andrew Rehfeld, president and CEO of the Jewish Federation of St. Louis, said that it is precisely the message the HMLC works to convey every day.

“That is that our history, the history of the Jewish people and the Jewish values that we have, are at once particular and very much a unique experience yet they have universal lessons for everyone,” he said.

“There are many people who did not live this history and the only way you can ever learn from history is to know that it happened,” she said. “I do think there are many lessons going forward about getting along with people different from you. That’s the whole point of something like this.”

Co-sponsored by the HMLC, the JCRC and the Brodsky Library as well as the Regional Arts Commission, the exhibit, a part of the ongoing STL250 observance of the city’s quarter-millennia in existence, will be up in the Kopolow building until early April.