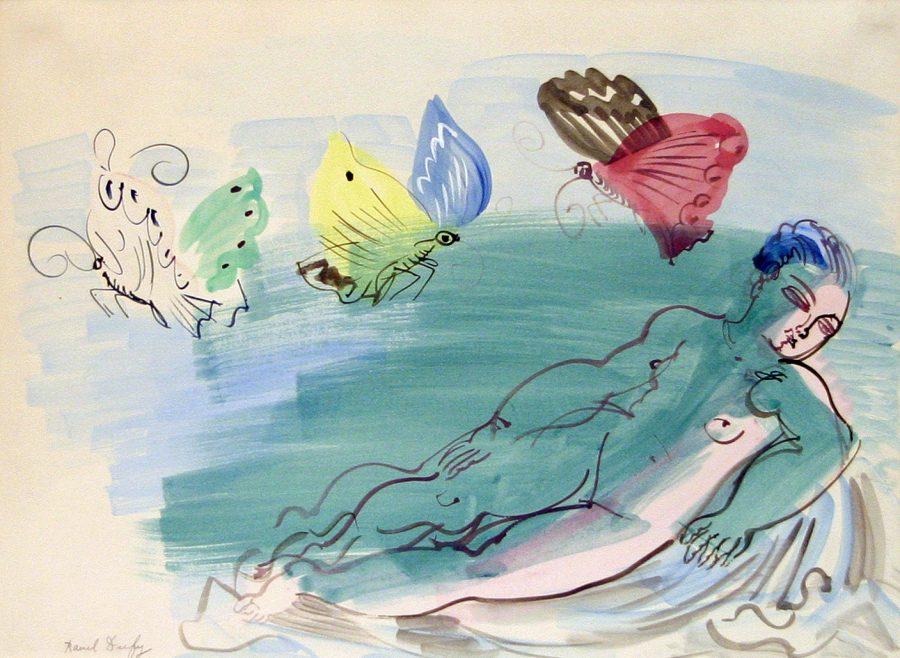 Aphrodite with Butterflies by Raoul Dufy

Artists have taken inspiration from Greek myths for the past 2,500 years, evidence of the myths’ relevancy long after ancient Greek civilization disappeared. “Picturing Narrative: Greek Mythology in the Visual Arts” at the Mildred Lane Kemper Art Museum is a small show but its incredible variety of objects more than makes up for that. It includes ancient Greek vases, Renaissance prints of classical sculptures, Greek coins, a maiolica dish, and modern paintings.

For me, the most interesting pieces here are the oldest and newest works.  Red and black Greek vases, dating from the sixth and fifth centuries B.C., depict mythological scenes such as Athena on a chariot and Heracles (Hercules) completing two labors. It’s rare to see such old, beautifully decorative pieces, created by a society that worshipped these figures.

Modern artists considered myths as important as the ancient Greeks did, and interpreted them for their own time and place. In 1945 the Romanian-born artist André Racz created “Perseus Beheading Medusa VIII,” an engraving with aquatint.  Scholars believe the piece to be an allegory of the end of World War II.  According to the Greeks, Medusa was a snake-haired Gorgon beheaded by the hero Perseus.  In Racz’s piece, Perseus and Medusa are abstracted figures.  Though Perseus just beheaded Medusa, his own head looks like a skull.  He stares directly at Medusa, which according to the myth would turn him to stone.  Traditionally, Perseus represented good and Medusa evil, but this depiction is more ambiguous.  The Allies and Soviets may have won the war, but does the act of killing turn even the righteous into monsters?

Romare Bearden, an African-American modern artist, also tweaks ancient myth for modern purposes.  “Black Venus” from 1968 is a paper collage in which Bearden depicts a nude Venus lying facedown on a couch in a living room, her arms crossed under her face.  In the lower left-hand corner, a musician strums his guitar.  Off to the right, in a different room, an African-American woman stands with her arms above her head, perhaps in the midst of a domestic chore.  Bearden fills the room with ordinary objects like a table with wineglasses, pictures on the wall, and curtains.  This goddess with an unexpected skin tone occupies an unexpected space.

“Picturing Narrative: Greek Mythology in the Visual Arts” is on view at the Mildred Lane Kemper Art Museum through Jan. 4 at Washington University, One Brookings Drive. Museum hours are Wednesday through Monday, 11 a.m. – 5 p.m., and closed Tuesday.  On the first Friday of each month, the museum is open from 11 a.m. – 8 p.m.  To learn more, call the visitor information line at 314-935-4523 or visit www.kemperartmuseum.wustl.edu.