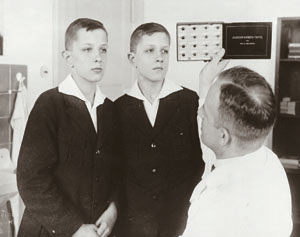 In a laboratory at a former eugenics institute in Berlin, geneticist Otmar von Verschuer examined twins to study hereditary links to criminality, mental retardation, tuberculosis and cancer. In 1927, he recommended the forced sterilization of the "mentally and morally subnormal." Archiv zur Geschichte der Max-Planck-Gesellschaft, Berlin

Dr. Stephen Lefrak often sounds as much like a historian as he does a medical man. While he toured with a visiting reporter around the Bernard Becker Medical Library near Barnes-Jewish Hospital last week he needed to be both.

“The idea of eugenics goes back forever,” said Lefrak, director of the Humanities Program in Medicine at Washington University School of Medicine. “They may not have understood genetics but the Spartans took kids who didn’t look so good and left them in the mountains. Plato talks very clearly about how some people are beyond hope and we are better off without them. Shakespeare even talks about it in his plays.

“The whole concept of aristocracy, having blue blood, was eugenics,” he added.

Eugenics plays a central role in a traveling exhibit by the United States Holocaust Memorial Museum entitled “Deadly Medicine: Creating the Master Race” meant to examine the medical aspects of the Nazi regime’s well-known brutality. The display, which opened earlier this month, will run through Oct. 30. Lefrak, a pulmonary ICU physician, will give a lecture in connection with the exhibition at 4 p.m., Aug. 31 in the North Building’s Moore Auditorium.

Lefrak, a congregant at Bais Abraham, said that while eugenics, which means literally “good birth” or “well-born,” itself was very old, the “medicalization” of it had its roots in Gregor Mendel’s famous work on genetics and Charles Darwin’s theories on natural selection. In fact, the term was initially coined by Francis Galton, a cousin of Darwin’s.

“Of course, like all eugenicists, he decided that people like him should have more children,” Lefrak said of Galton. “It’s the usual game.”

By the early 20th century, the concept of eugenics had spread widely and was being enshrined in laws mandating sterilization of “undesirable” individuals such as those with disabilities. Laws were passed in the United States as early as 1907 and codified by the Supreme Court in 1927’s Carrie Buck case in which Justice Oliver Wendell Holmes wrote for the majority with the now infamous sentence, “Three generations of imbeciles are enough.” But it wasn’t until Germany where the movement took hold.

“Hitler and the Nazis were always yelling that ‘America is ahead of us,'” Lefrak said. “‘We need to catch up to the United States.'”

Lefrak said the Nazi strongman was also an admirer of America’s 1924 immigration law, which heavily weighted the number of new immigrants toward those of Aryan descent instead of those from Southern or Eastern Europe. The law would persist until the 1960s.

Regardless, eugenics in Germany did not start with the Nazis. In fact, an active campaign for the movement was already underway in the Weimar Republic, which encouraged “desirable” individuals to marry and breed. Dr. Otmar von Verschuer, director of the Kaiser Wilhelm Institute for Anthropology, Human Heredity and Eugenics, was particularly active in research on twins.

He was also a mentor for his more well-known assistant, Dr. Joseph Mengele. Doctors, in fact, had a high rate of membership in the Nazi Party.

“[The exhibit] really should be called “Deadly Anthropology” because most of these guys, even though they were doctors, were anthropologists,” Lefrak said. “Anthropology at this time in Germany was a branch of medicine.”

Meanwhile, Germans were encouraged to refrain from vices like drinking and cigarettes. They were also told to have large families. Women were awarded the “Honor Cross of German Motherhood” for having four or more children and being of good character.

“It was gold if you had eight children,” Lefrak said.

After the beginning of the war in 1939, German eugenics entered a more deadly phase with the onset of the “T-4” program under which at least 70,000 adults and 5,000 children were murdered for being “incurably” sick, often for just having disabilities. The program officially came to an end in 1941 but is thought to have quietly killed thousands more afterward without public acknowledgement.

Though not directly tied to larger scale genocide in the Holocaust, T-4 bore eerie similarities in methodology including the use of gas chambers disguised as showers. Lefrak said that a number of individuals who ran T-4 later were put to work supervising extermination camps in Eastern Europe after that program got underway.

Doctors played the key role in T-4, including its coverup.

“To organize this was not so easy,” Lefrak said. “You had to get doctors signing these death certificates with pneumonia or appendicitis.”

But for Jews, the eventual introduction of gas chambers was only an innovation that “medicalized” a preexisting program of killing that was already being conducted through mass shootings, which slaughtered as many as 1.5 million people.

Even that had medical aspect, at least in the symbolic sense. Lefrak pointed to a propaganda poster portraying a giant louse with the claim “Jews are lice. They cause typhus” and noted that Jews weren’t just considered carriers of disease. The propagandists spread the idea that Jews were a disease themselves.

“What they really talked about was the ‘people’s body,’ Lefrak said. “We think that’s metaphoric but it was much more than that. It was almost visualizing a real body and this body could be invaded by particles and it didn’t matter whether those particles were Jews or cigarette smoke.”

For Lefrak, it relates to a larger point. As big a role as doctors played in the murderous reign of the Nazis, they weren’t the catalyst. Nor even was eugenics, a program that was popular worldwide, particularly in the U.S. and Britain.

“Yet we and they never moved to murder so just to say this was eugenics alone . . . ,” he said. “Why could the Germans kill 1.5 million Jews by machine gunning? That has little to do with medical killing.”

As for the doctors themselves, those who worked to implement or benefitted from the Nazi embrace of eugenics, there is a sad end to the tale.

“There wasn’t much justice for most of them,” Lefrak said. “They had successful careers.”

Both Lefrak’s talk and the exhibit are free and open to the public. The August event will be followed by other speakers including Eva Mozes Kor, a Holocaust survivor who will talk on “The Lessons I Learned in Mengele’s Lab” on Sept. 8.