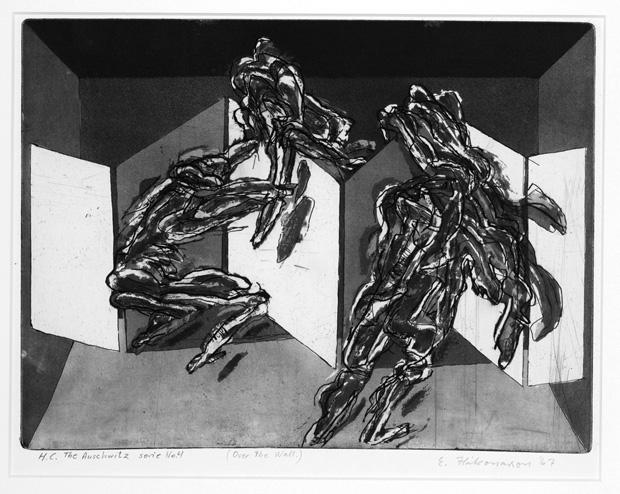 One of six etchings in an upcoming exhibit at SLU. The works, by Icelandic artist Einar Hákonarson, depict abstractions of life at Auschwitz

A series of etchings depicting scenes related to the Holocaust will be the subject of an upcoming exhibition at the St. Louis University Museum of Art.

“In light of the horrible atrocities that are happening globally, this seems very timely,” said the Rev. Terrence Dempsey, director of SLU’s Museum of Contemporary Religious Art. “Hopefully, it will refresh a memory, not a happy memory, but a memory that we can’t just take it for granted that this won’t happen again.”

The six etchings, which depict abstractions of life at Auschwitz, are the work of Icelandic artist Einar Hákonarson, who gave them to a local couple, Jordan and Lorraine Cherrick, a decade ago. The Cherricks have donated the items to the midtown museum, which will host a dedication Sunday, March 2, at 3 p.m.

The collection is dedicated in honor of Fred Zeidman, chairman emeritus of the United States Holocaust Memorial Council. Zeidman is expected to attend the event.

Hákonarson was initially moved to create the etchings in 1965 during his time spent as a student in Sweden when he went on a visit to the infamous camp at Auschwitz.

“He said it never left him. It has profoundly changed his life,” said Dempsey, who oversees both SLU’s Museum of Art (SLUMA) as well as its Museum of Contemporary Religious Art (MOCRA). “It affected his art from that point on. He’d been doing largely abstract work prior to that and began to reintroduce the human figure. A lot of the themes in the work that he did after that dealt with human suffering and asking the question of ‘Why me?’ ”

Accompanied by artist commentaries, the subjects seen in the Auschwitz etchings show such scenes as life in a boxcar arriving at the camp, the showers at Auschwitz and escape attempts over the walls.

“Finally, you have the triumph of the human spirit over this atrocity,” said Dempsey, who said the work was completed over a two-year period.

It will be the first time these prints made from the etchings will be put on public display. The dedication Sunday will feature a variety of prayers, songs, chants and brief speeches. In addition to the Cherricks and others, Rabbi Randy Fleisher and vocal soloist Leslie Caplan, both of Central Reform Congregation, will be on hand.

“I think it will be an unusual and hopefully moving ceremony,” said Dempsey, adding that the exhibition will be up for at least several months. No end date has been decided.

In a written statement, Jordan Cherrick said the etching are a “gift to humanity” he and his wife donated to the museum that will hopefully encourage those who see this great work “never to forget the horrors of the Holocaust and never to allow such a heinous crime to occur again.”

Dan Reich, director of education for the St. Louis Holocaust Museum, said that his institution wasn’t involved in the event but that he was looking forward to attending.

“It is very easy to reduce the Holocaust to a series of statistics and lists and numbers,” he said. “Artists can take what they experience and learn about it. When they express that in artistic ways, it can be that much more moving.

“There have been some survivors who have said that it is only through the arts that you can convey that which is truly ineffable, that you have to do it through creativity, because the reality is too difficult to accept.”