Essential reading on the history of Jews and baseball 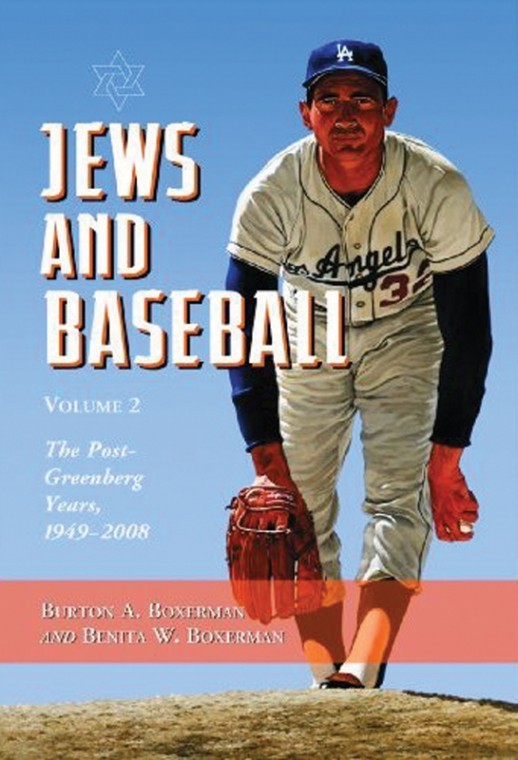 By Robert A. Cohn Editor-in-Chief Emeritus

Jewish baseball fans eager to learn more about the relationships between the Chosen People and the National Pastime have a wide variety of books and films from which to choose.  Here is a select annotated bibliography and filmography that deal with Jews and baseball.  Nearly all of the below listed books and films are available at the Brodsky Library at the Jewish Federation’s Kopolow Building.

•  “Jews and Baseball, Volume I, Entering the American Mainstream, 1871-1948,” and Volume II, “The Post-Greenberg Years, 1949-2008” (McFarland & Co,.  $45 per volume), by local authors and historians Burton and Benita Boxerman.  The Boxermans hit a grand slam with this two-volume set, which deserves to be called the “definitive” work on Jews in baseball.  The first volume’s cover features Hammerin’ Hank Greenberg of the Detroit Tigers, the Hall of Fame slugger who in 1938 came within two home runs of breaking Babe Ruth’s then-record of 60 in a season.   The Boxerman books have information on all Jews who played in the majors, including St.  Louisans Ken Holtzman, who won more big league games than any Jewish pitcher in history (including the legendary Sandy Koufax) and Art Shamsky.   If you only have two books in your library on Jews and baseball, the Boxerman titles fill the bill.

•  “The Baseball Talmud” by Howard Megdal (Collins, $22.99), properly described as “the definitive position-by-position ranking of Baseball’s Chosen Players.” Megdal, who covers baseball for the New York Post, and who was a speaker at the St.  Louis Jewish Book Festival a few years back, assembled a “just the facts” gold mine of information on all known Jewish players in Big League history.  Also check out www.baseballtalmud.com.

•  Sandy Koufax, described by fellow Hall of Famer Don Sutton of the Los Angeles Dodgers as the “Michaelangelo” of Big League pitching, is the subject of two excellent biographies:  “Koufax,” by Edward Gruver (Taylor, $24.95) and “Sandy Koufax: A Lefty’s Legacy,” by Jane Leavy (HarperCollins, $23.95).  Gruver, an award-winning sportswriter, bases his book on extensive interviews with friends, former teammates and opponents as well as fellow sports journalists.  He tells the story-within-a-story of Koufax’s “Herculean feat” in game seven of the 1965 World Series, when after two days of rest, he led his team to a 2-0 shutout against the Minnesota Twins.  Leavy, also a veteran sportswriter and feature writer for the Washington Post, gets closer to Koufax than perhaps any other writer, and “penetrates the mythology to discover a man more than worthy of myth.”

•  The stellar career of Hank Greenberg, whose slugging record has not been matched by any other Jewish player, continues to inspire new books.  The latest entry is “Hank Greenberg: The Hero Who Didn’t Want to Be One,” by Mark Kurlansky (Yale University Press, $25).    Part of Yale University’s “Jewish Lives” series, Kurlansky’s book re-visits the baseball career of Greenberg with the Detroit Tigers and his decision not to play on Yom Kippur, and of course his aforementioned 1938 season when he came within two home runs of Babe Ruth’s then-season record of 60.  Kurlansky offers some new information on Greenberg’s move back to New York and his successful career as an investor, based in part on his experience as a savvy negotiator during his playing career.

•  “The Catcher Was a Spy: The Mysterious Life of Moe Berg,” by Nicholas Davidoff (Pantheon, $24) is the definitive biography of a Jewish major leaguer whose off-field adventures were truly fascinating.   Berg, who played in the majors from 1923 through 1939, joined U.S.  intelligence to work for the OSS (Office of Strategic Services, the precursor to the CIA), where his espionage was key in determining the extent of Nazi Germany’s quest for the atomic bomb.  As this worthy piece of nonfiction explains, Berg occupies a unique niche in Jewish baseball history.

• “The Big Book of Jewish Baseball: An Illustrated Encyclopedia and Anedotal History,” by Peter S.  Horvitz and Joachim Horvitz (Baseball Collectibles Library, Judaica Sports, $19.95).  While not as scholarly or comprehensive as the above works, this volume deserves to be in a Jewish sports fan’s library.  The father and son authors include numerous anecdotes, which should brighten any baseball conversation with fellow Jews.

•  “Designated Hebrew: The Ron Blomberg Story,” as told to Dan Schlossberg by Ron Blomberg (SportsPublishing, LLC, $19.95).  When Ron Blomberg wore a New York Yankees uniform back in 1973, he made baseball history as the first designated hitter in the American League.   which Blomberg who later played for the Chicago White Sox, had been billed as the “next Mickey Mantle,” but injuries and other bad breaks prevented him from achieving the greatness that was expected.  Blomberg was a popular speaker at the St.  Louis Jewish Book Festival back in 2006, discussing his humorously titled book, “Designated Hebrew.” Not quite on par with the above books, Blomberg’s tome is an amusing footnote to an interesting if ultimately disappointing career.

•  “Hank Greenberg: Hall of Fame Slugger,” by Ira Berkow (Jewish Publication Society, $12.95) and “Moe Berg: the Spy Behind the Plate,” by Vivian Grey (Jewish Publication Society, $12.95).  Berkow, a celebrated sports writer, provides a highly readable biography of Hank Greenberg, and Vivian Grey, an accomplished author of children’s and young readers books, provides an accessible volume on the life of Moe Berg.  Each of these books would make excellent bar or bat mitzvah gifts, and are written in a style that would appeal to sports fans of all ages.

•  “Baseball: Never Too Old to Play the Game,” by Al Spector, (Cincinnati Book Publishers, $18.95).  Spector is a proud graduate of University City High School who retired after a 33-year career with Procter & Gamble Company “because work was getting in the way of playing baseball.” He has written an amusing and affectionate memoir with his lifetime love affair with playing baseball.

•  “Pitching in the Promised Land: A Story of the First and Only Season in the Israel Baseball League,” by Aaron Pribble.  (University of Nebraska Press, $24.95).  Pribble, who played collegiate baseball at the University of Hawaii and then professionally in the Minor Leagues in the Western and Central Baseball Leagues and later in France and Israel, describes the ups and (mostly) downs of the Israel Baseball League’s first (and only) season.  Despite the success Israel has enjoyed with basketball, due in part to importing some U.S.  players, the IBL experienced one setback after another, including major injuries, financial pressures and morale problems.

•  Other Jewish authors have been fascinated with baseball, including Bernard Malamud, whose haunting book “The Natural” was made into a movie starring Robert Redford, and Philip Roth, who vividly evokes the baseball games of his Newark childhood in such books as “Portnoy’s Complaint” and “Patrimony.”

• “The Cardinals of Cooperstown,” by local Jewish sportswriter Myron Holtzman is an excellent book, listing all Baseball Hall of Famers who ever wore a Cards uniform.

Two films, each of which was featured at the St.  Louis Jewish Film Festival in the current and previous seasons, deserve mention:

•  “Jews and Baseball: An American Love Story,” directed by Peter Miller, 91 minutes.  Narrated by two-time Oscar winner Dustin Hoffman, this film provides a comprehensive sweep of contributions made by Jewish Major League players, including Sandy Koufax, Hank Greenberg, Andy Cohen, Al Rosen and St.  Louisans Ken Holtzman and Art Shamsky.  Included are archival photos and film clips of memorable moments in baseball and a jazzy score including both klezmer and Benny Goodman numbers.  The film is entertaining as a companion to the more encyclopedic books listed at the head of this story.

• “The Life and Times of Hank Greenberg,” directed by Aviva Kemper, 95 minutes.  Kemper, one of the best Jewish film documentarians around, who recently produced and directed “Yoo, Hoo, Mrs.Goldberg: The Gertrude Berg Story,” provides an in-depth look at the life, times and major contributions to a positive American Jewish identity that resulted from the memorable career of Hank Greenberg.  As the viewer observes Greenberg closing in on Babe Ruth’s record, he or she “roots” for him to break it even though the outcome is known.  According to some observers at the time, some pitchers deliberately did not give Greenberg good pitches just to prevent a Jewish player from breaking the Bambino’s record.  This movie is a must for the Jewish baseball fan’s collection.