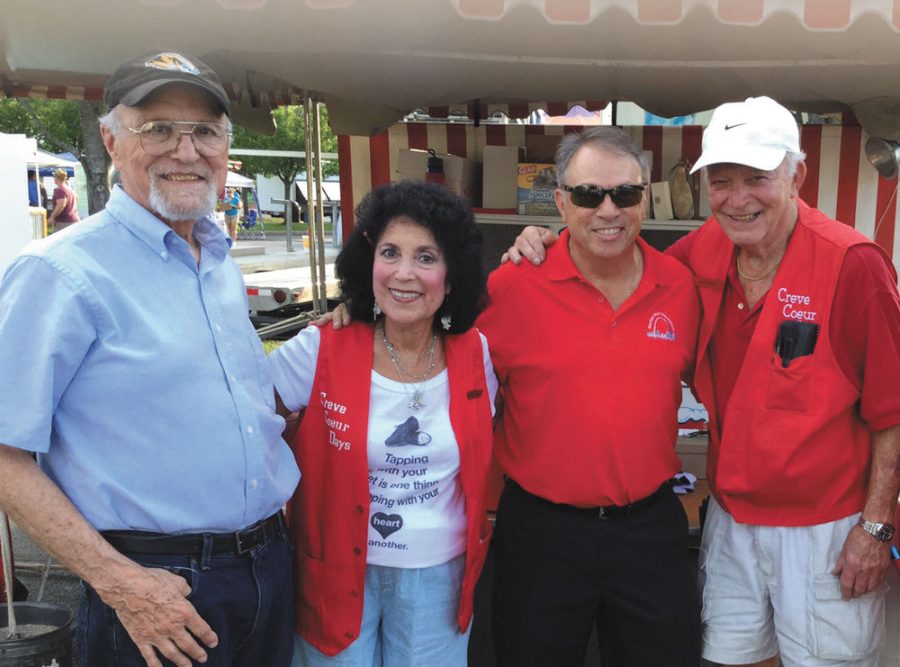 Ed Farber, a local artist and writer, became involved with Creve Coeur Days 46 years ago, mainly because of his wife. She was a member of B’nai Brith Women, a community and philanthropic nonprofit that raised money for the organization through a carnival stand offering hot dogs and soft drinks.

“I was tagging along all the time, and they talked me into joining” the Creve Coeur Days board, recalls Farber, a longtime member of United Hebrew Congregation.

Now 86 years old, Farber still serves as chairman of the promotion committee for the carnival, which pops up on the De Smet Jesuit High School campus.

He no longer hops on any of the carnival rides; instead, he watches his great-grandchildren buzzing around on them.

Why have you remained involved with Creve Coeur Days?

Unlike a lot of the other community festivals that are run by cities, Creve Coeur Days is different because it’s run totally by volunteers, and they are not connected with the city. All the funds we raise are earmarked for charity. We recently donated to organizations like Shriners Hospital, Salvation Army, the Ronald McDonald House and the Humane Society.

What are some of your favorite memories from the carnival?

I have vivid memories of my own kids going on the rides, and then their kids would come up, and now it’s my great-grandkids who are coming up there, so those are the most pleasant memories I have of it.

What type of art do you do?

I started as an abstract artist because in the ’50s that was a big thing and all my instructors in high school and college were pushing abstract art. Eventually, my style evolved into something a lot more realistic, or traditional. My most recent painting was a large painting of two dogs that I used to have. One was a dalmation and the other was a Labrador and I put them next to each other and I called the painting, “Black and White.”

You’ve also written books, including a memoir, “Looking Back With a Smile” and a short story collection, “Echoes of Clara Avenue.” Could you share a story from your memoir?

When we were kids during the Depression, we would have a lot of peddlers that would come around the neighborhood because the women were mostly homebound and they did not go out to the grocery store.

This particular incident was about a watermelon dealer that came by, and he used to park on the street and all the housewives would come out to the truck, and there was one woman, I called her Mrs. Nussbaum, who would always ask the watermelon dealer to cut a plug out of the watermelon so she could taste it to see if the watermelons were sweet. She would turn to the other ladies and say, ‘Ah yes, real sweet.’ And the ladies would then buy watermelon.

One day I was waiting for my friend Nelson Zucker near Mrs. Nussbaum’s house. I saw the watermelon man come up to her back door, knock and she came out on the back porch, and he gave her some money. I didn’t know what it was for. She spotted me and called me over and gave me a nickel and winked at me. She said to me, “This will be our little secret.” And I’m saying, “OK, fine.”

A nickel is hard to come by in the Depression, so every time then I would see her, I would wink and she would give me a nickel. And this went on for a long time. I didn’t realize until many years later that Mrs. Nussbaum was the watermelon man’s shill, and I was her blackmailer.

Do you keep in touch with any people from those days?

My pals all went to Emerson School, or at least most of us did, and we all belonged to Council House located on Wells Avenue and Temple in the city. We formed a club when we were 11 called the Panthers, and we call ourselves the Panthers to this day. Most of those people go to the J and are involved in the Jewish community. We still meet Friday mornings for coffee at McDonald’s.