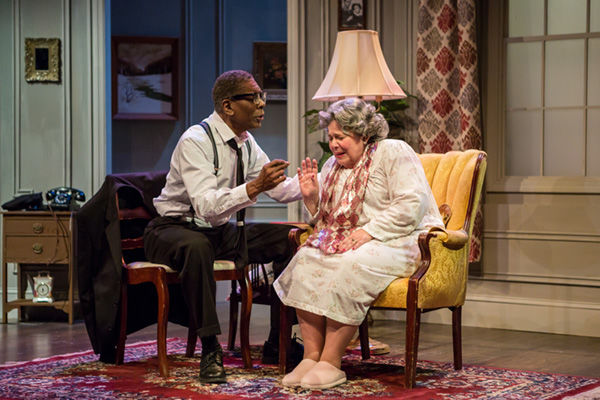 BY ROBERT A. COHN , Editor-in-Chief Emeritus

“Driving Miss Daisy,’ Alfred Uhry’s acclaimed 1988 play that won both the Tony Award and a Pulitzer Prize in drama, and an Oscar for the film version the following year, is given a powerfully acted and timely reprise as the New Jewish Theatre’s second play of its 20th season.

The three-character play, splendidly directed by Syndie Grosberg Ronga and featuring strong performances by all the actors, is appearing at the Jewish Community Center through Dec. 18. NJT last presented the play during its 2004-2005 season.

The Miss Daisy of the current production, portrayed with impeccable skill by Kathleen Sitzer, who is also NJT’s artistic director—is a strong-willed Southern Jewish woman in the state of Georgia. Sitzer delivers a bravura performance as Miss Daisy, from the outset of the play in 1948, when she is 72, through 1973, when she is 97. As she gradually becomes more limited physically, Sitzer portrays her advancing frailties with total credibility.

The play begins just before the Civil Rights Movement of Rev. Martin Luther King was launched in the Deep South. Daisy Werthan, a wealthy, assimilated Reform Jewish Southern lady, known for her acerbic humor and sharp tongue, depends on her good-humored son Boolie, a successful businessman, as her support system. When she totals yet another car, Boolie, who kiddingly calls his mother a “real doodle,” insists that she hire a chauffeur to avoid another and potentially fatal auto accident.

Eric Dean White is pitch-perfect in the challenging role of Boolie Werthan. Boolie is married to the vain, social-climbing Florine, and is caught between his disapproving mother and acquisitive wife, all while succeeding as a Jew in the Deep South when groups like the Ku Klux Klan were almost as vigorous in persecuting Jews as they were blacks. Boolie balances the various roles he must play as an indulgent son and a long-suffering husband, as well as the front he must put up as a “good Jew” to his prejudiced business associates. White does a superb job in combining those elements and bringing real humanity to the character.

Another top-notch performance is that of J. Samuel Davis as Hoke Coleburn, who is hired by Boolie over the vehement opposition of Miss Daisy. She greets Hoke with an almost complete stony silence, relegating him to sitting all day in the kitchen and adamantly refusing to accept his offers not only to drive her to the local Piggly Wiggly grocery story, but to do odd jobs around Daisy’s home at no extra cost.

Gradually, like two scorpions circling each other in a jar, Miss Daisy and Hoke form a relationship. Miss Daisy realizes that at 72 years old, she needs help getting around, and Hoke wants to feel good about doing an effective job. Daisy and Hoke, described by some as an interracial “odd couple,” grow more and more positively enmeshed with each other during the 25-year time frame of the play.

We follow the deepening friendship between Hoke and Daisy during the tumultuous period for race relations in the South. Hoke’s inherent and practiced decency, patience and good humor, gradually break down the solid wall of defenses put up by Miss Daisy, who comes to appreciate and like Hoke not as a “driver,” but as a dear and trusted friend. The two characters interact against the backdrop of such key events of the civil rights era, including the pipe bombing of the famous Reform Jewish synagogue in Atlanta, which is known as The Temple. When Hoke is bringing Miss Daisy to Sunday services, they are caught in a huge traffic jam, which Hoke informs her was caused by the bombing for which no one has ever been convicted.

The Jewish matriarch and the African-American driver are drawn even closer together through their shared victimhood. Despite her frequent racist observations and false insistence that she is “not prejudiced,” Miss Daisy and Hoke become ardent supporters of Dr. King.

Miss Daisy’s former career as a schoolteacher is brought back into play when Hoke meekly confesses that he cannot read. In a scene that evokes the breakthrough moment when Helen Keller’s teacher Anne Sullivan taught her how to say the word “water,” Miss Daisy almost instantly puts Hoke on the path to literacy during a visit to her husband’s grave at a Jewish cemetery.

The timing of this revival of “Daisy” could not be more fortuitous. Two years after the shooting death of Michael Brown set off demonstrations and riots in Ferguson and across the nation, and when the nation has just endured an acrimonious presidential campaign in which both racism and anti-Semitism returned to the forefront, it is comforting to be inspired by a play dealing with inter-group issues and how to resolve prejudice.

“Driving Miss Daisy” is not only good theater: It is a reminder that even in the darkest days, people of good will can improve human relations and substitute the power of love for the corrosive effects of hate.