Drawn to the Stars: St. Louis-born artist finally gets a major retrospective in his hometown 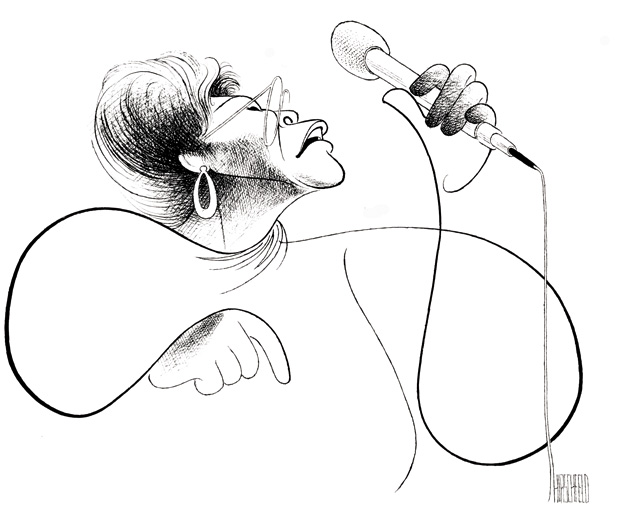 BY PATRICIA CORRIGAN. SPECIAL TO THE JEWISH LIGHT

Lauren Bacall considered him “an American institution,” Zero Mostel called him “God with a beard” and the 1996 documentary about him is titled “The Line King.”

The world knows him as Al Hirschfeld, an artist best known for his caricatures of  Hollywood celebrities and Broadway stars – and also for hiding his daughter Nina’s name, often multiple times, in his drawings.

A native St. Louisan, Hirschfeld is part of the St. Louis Walk of Fame and also in the Jewish American Hall of Fame. He died in January 2003, just five months shy of his 100th birthday. Fittingly, in celebration of its own 100th anniversary, the Sheldon Concert Hall now brings to its art galleries the first major retrospective of Hirschfeld’s work in his hometown. The exhibit opens Friday and runs through Jan. 5.

“We know many people love Hirschfeld, and we are excited to bring this new audience to the Sheldon,” said David Leopold, curator of the exhibit and the archivist at the Al Hirschfeld Foundation in New York.

On display in the Sheldon galleries will be more than 100 original drawings, paintings, prints, collages, posters and ephemera from Hirschfeld’s career, including his iconic drawings of Carol Channing, Laurel and Hardy, Jelly Roll Morton, Louis Armstrong and Duke Ellington. Additional items will address his lifelong fascination with jazz, including Hirschfeld’s custom-made stereo system and his extensive record collection. African drums – including one made into an end table and a seven-foot-tall Haitian drum — and Balinese shadow puppets from his home also are part of the exhibit.

“There is a drawing of Ella Fitzgerald, springing from a simple line that does everything, goes everywhere, to give us an incredible portrait of the First Lady of Song,” Leopold said. “It turns out Hirschfeld saw her debut at the Apollo Theater. So much of his career was a product of his own interests, drawing things he loved and enjoyed.”

Mary Strauss, a major underwriter of the exhibit along with Terry and Sally Schnuck, is a longtime fan of Hirschfeld’s work. “Hirschfeld is such an iconic person, and this is a beautiful exhibit,” said Strauss, who is busy planning the 30th anniversary of the Fox Theatre. “There hasn’t been a Hirschfeld retrospective in his home town since 1977, and this is the perfect time.”

Hirschfeld was born in St. Louis in 1903. He attended Clark Elementary School, and a drawing he made of the school is part of the exhibit. “When people see it, they won’t believe an 11-year-old could draw like that, but it’s his,” Leopold said. “He always used to say that he ‘contracted a sickness for drawing’ at an early age.” Charles Marx, a St. Louis art teacher, recognized the boy’s talent early on and recommended the family move to New York, which they did in 1914.

Hirschfeld enrolled at the Art Student’s League, and at 17, he became an art director at Selznick Pictures. In 1943, he married Dolly Haas, a European actress, and they had one daughter, Nina, born two years later. The marriage lasted 52 years, until Dolly died in 1994. Three years later, Hirschfeld married Louise Kerz. For much of his career, Hirschfeld hung out in Hollywood, attended Broadway plays and took in jazz concerts, drawing the performers for the New York Times and other publications.

“In the exhibit we have a triptych of three drawings of Zero Mostel in ‘Fiddler on the Roof,’  Liza Minnelli in ‘Cabaret’ and Barbra Streisand in ‘Funny Girl,’ each of them  autographed by the stars. They all knew and loved Hirschfeld,” Leopold said. On display as well is Hirschfeld’s drawing of Ethel Merman in “Panama Hattie,” which opened on Broadway in 1940.

Hirschfeld received two lifetime achievement Tony Awards. The old Martin Beck Theatre, at 302 45th Street, was re-named for Hirschfeld in 2003, on what would have been his 100th birthday. And “The Line King” was nominated for an Academy Award. The Sheldon hopes to schedule showings of the film during the exhibition.

Another highlight is the bulletin board from Hirschfeld’s studio, where Leopold worked with him, beginning in 1990, organizing and cataloging decades of drawings. “The bulletin board is a slice of his life, filled with letters, awards, photos and cartoons, including one from the New Yorker where a man sitting in a living room asks the woman next to him when she started putting ‘Ninas’ in her hair,” Leopold said.

“The more you look, the more you find — and it’s all fascinating. Now we want to share all our enthusiasm for Al Hirschfeld with St. Louis.”