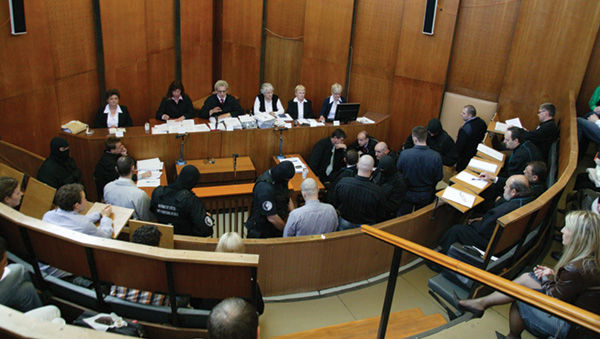 The Hungarian documentary ‘Judgment in Hungary’ follows the two-year trial of four men accused of the racially motivated killing of six Roma people.

It is not often that a film gets its U.S. premiere in St. Louis, but that is the case for the award-winning “Judgment in Hungary.”

This powerful courtroom-drama documentary spotlights the trial of four Hungarian men accused of the racially motivated killing of six Roma people, including a 4-year-old.

“Judgment in Hungary,” which debuts Sunday, March 26, at the Holocaust Museum and Learning Center of St. Louis, has won 19 awards and been shown in at least 12 countries.

The premiere is quite a coup for the Holocaust Museum, and a way to highlight the museum’s offerings of important if little-seen films. The documentary will be introduced by film scholar and former university professor Pier Marton. The French-born Marton, who will lead a discussion after the screening, is the son of Hungarian-born photographer Ervin Marton, who was a member of the French Resistance during World War II.

Director Eszter Hajdú got remarkable access in filming the two-year trial of the four men that began in 2011 in a cramped Budapest courtroom. The trial highlights widespread prejudice in Hungary against the Roma, also known as gypsies, who have been stereotyped as criminals and regarded as outsiders. The killings were committed by a gang of Hungarian extremists in 2008 and 2009.

Hajdú, who worked on the project for more than three years, takes a straightforward, unobtrusive approach in her film, offering neither opening explanations nor narration. Her hands-off style puts the focus on the drama of the unfolding court case.

At times, action in the courtroom verges on chaos. Emotions run high, with the cold arrogance of the accused contrasting with the pain of the victims’ families. The shackled defendants are escorted into the courtroom by black-uniformed police wearing ski masks to conceal their identities. They stand before a panel of court officials, led by a judge, and flanked by tables for lawyers for the defense and prosecution.

Hajdú’s camera does not cut away from graphic images of the victims presented as evidence and follows trial participants as they visit the site of one violent attack, where a Roma family was shot and their home set on fire.

A court trip to the home of one of the defendants is particularly revealing, focusing on a photograph of Adolf Hitler among his scattered possessions.

In the claustrophobic courtroom, Hajdú places her cameras to show the points of view of both the judge and the defendants, putting filmgoers in the middle of the drama and giving them a remarkable view of the proceedings.

Three of the four defendants claim innocence, but the fourth admits guilt as an accessory to the murders, offering evidence against the others.

The documentary gives us a peek into a courtroom and legal system that differs from our own. But more significantly, it reveals the chilling persistence of prejudice against the Roma among some Hungarians. Jews and Roma suffered Nazi persecution in Hungary, and evidence pointing to neo-Nazi beliefs raises hairs on the back of one’s neck.

If this documentary has a star, it is the charismatic Judge  Laszlo Miszori. With his tightly curled white hair and bespectacled face, the judge has a grandfatherly appearance, but his sharp tongue, occasional sarcasm, and zero-tolerance of both evasive answers and emotional outbursts from either defendants or witnesses presents a different picture.

At first, it seems as if the judge may be favoring the prosecution (and indeed the defendants later made this claim). But later, his tart-tongued treatment of a witness for the prosecution suggests the reverse. Our uncertainty about the judge adds to the tension about how the case will turn out.

As the documentary unfolds, it sometimes moves out of the courtroom, and friends and relatives of the victims speak movingly about what happened to their loved ones. Hajdú never interjects narration or expert commentary, keeping the focus on the participants.

The heartbreak of the Roma family members is contrasted with the indignation of the defendants and the squirming evasion of witnesses unwilling to openly acknowledge the lead defendant’s racist views.

The testimony of police who investigated the crime scenes is especially unsettling; their shoddy work indicates either incompetence or a callous indifference to the victims, even hinting at agreement with the criminals’ racist views. Late in the film, the director adds a little music, which heightens the drama as the trial approaches its conclusion.

“Judgment in Hungary” is a powerful, emotionally gripping documentary, one that gives remarkable insight into racist views in contemporary Hungary. It is essential viewing for its important message and its immediacy.