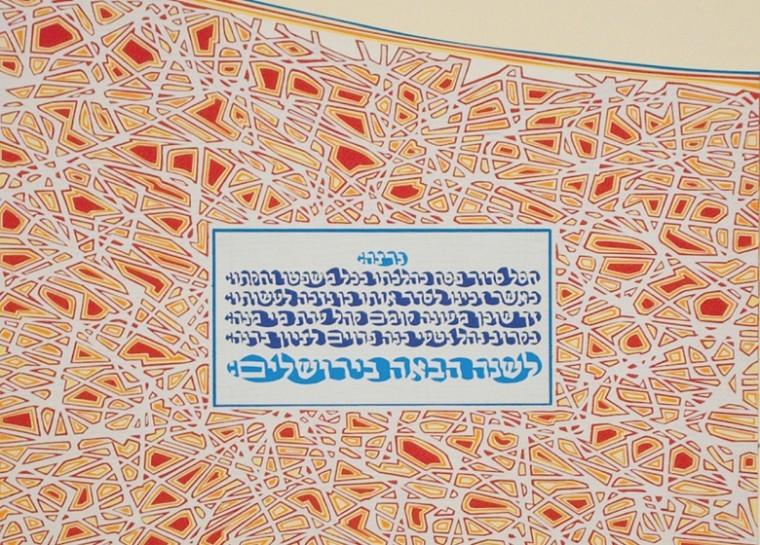 A detail of P. 46 of Archie Granot's ‘The Papercut Haggadah,' shows the intricacy of the artist's work. Image from the collection of Sandra and Max Thurm.

In many ways, paper may not seem the most enduring medium but it often represents the strength of traditions that were made to last.

Such it is with the Haggadah, an aspect of Passover that, thanks to Israeli artist Archie Granot, has now been rendered in papercut form in an exhibit set to come next week to St. Louis. Starting with a public opening reception Sunday, “The Papercut Haggadah” will be on display at St. Louis University’s Museum of Contemporary Religious Art (MOCRA) until May 20. The 55-piece work comprises various framed pages of the document rendered artistically in papercut form.

“The photos really don’t do it justice,” said MOCRA’s assistant director David Brinker of the exhibit’s promotional materials. “When you see all the latticework, the tracery and the webbing, those are actually maybe 10 or more layers of paper built up so with each one, it almost looks like a topographical map. They have much more dimensionality and vibrant color.”

Brinker said the distinctiveness of the work is an appropriate treatment due to the nature of the Haggadah itself.

“The text and the whole celebration is something which has a stable core and common point of reference but then is also very open to interpretation in each generation and each family,” he said.

The papercuts were commissioned by Max and Sandra Thurm, a New York couple who first came upon Granot’s work while on a trip to Jerusalem.

“The next time I went to Israel, I visited with him in his gallery and he showed me a totally papercut book that he had done for his son’s aufruf in the shul,” recalled Max Thurm. “That really triggered the idea of ‘wow, I’d kind of like something like that with the Haggadah.'”

That first meeting was the beginning of a painstaking decade-long process, which created the unusual project using the official Israeli Defense Forces Haggadah as its guide.

The finished product came together slowly, often using multiple layers of paper. Thurm recalls one section in particular where he wanted the artist to portray the action of the story through the style of the design. In it, the text describes the enslaved Jewish people pleading to God for help.

“His initial reaction was, ‘Are you out of your mind? How in the world am I going to do something like that?'” chuckled Thurm. “I said to him, you undertook it, you solve the problem.”

Granot did just that.

“The end result is that he did a beautiful, magnificent piece,” said Thurm. “It’s in black and literally layered downward with the text at the bottom. It’s a very dramatic piece.”

Thurm said he and his wife had never commissioned an artwork before. They hadn’t been looking to either but Granot’s work impressed them and Thurm said he felt a connection to the observance of Pesach.

“The Passover seder and the Haggadah always had a special place in my mind and heart because of the family aspect of it,” said Thurm, who will be on hand Sunday with his wife for the opening. “I had also felt that I very much liked the idea of the historical nature of it.”

Thurm believes it is that connection that will hold great meaning for Jews viewing the work.

“They say that a picture is worth a thousand words,” he said. “Seeing it in this art form will possibly enhance all the meanings.”

Granot, originally of London, has lived in Israel since the late 1960s and has been doing paper cutting for more than three decades. Maintaining a studio in Jerusalem, the artist, who will not be in St. Louis for the opening, has had his work has appear in Israel, Europe, the United States and Japan. Interviewed via email he said he hopes viewers will be inspired by a labor of love, noting that the images were the result of much thought and introspection.

“The creation of a Haggadah for Passover is the ultimate dream for any artist creating Jewish art,” he said. “I have been lucky in that I have achieved this dream.”

Thurm stresses that the exhibit transcends religious affiliation and can be seen as a project, which can stand on its own artistic merits.

“There are many non-Jews who know about the Haggadah and share seders with Jewish families,” he said. “If it’s something that relates to spirituality, I think all people are capable of and need spirituality. The earliest art was mostly related to spiritual matters so I think it’s very fitting for all people.”

Thurm said he thinks “The Papercut Haggadah” is unique in the world in terms of its medium and content. It’s already been displayed at the Jewish Theological Seminary and at Loyola University. He’s happy it’s now making its way to the Midwest.

“People should come and see it and judge it for themselves,” he said. “I have confidence in the work that when people come and see it, they will be pleased and amazed by the artwork and the way the concept and the text are treated.”