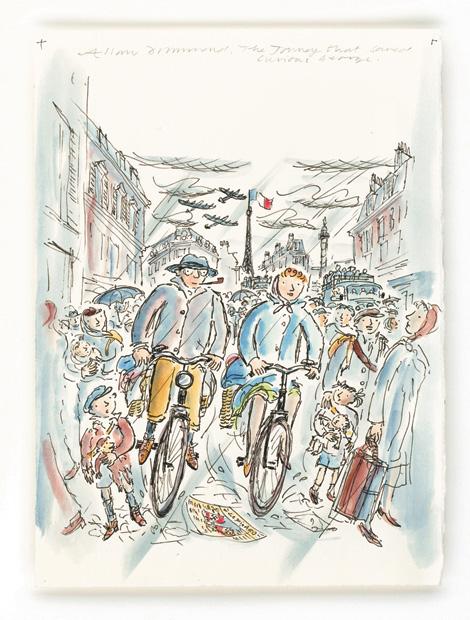 Many generations are familiar with the adventures of “Curious George” through the popular children’s books. But few know the adventures of the series’ authors, Margret and H.A. Rey, who traveled by bike, train and boat to escape the Nazi invasion of Paris.

The manuscript and illustrations of the mischievous monkey, originally titled “The Adventures of Fifi” were among the couple’s few personal items that traveled with them during their escape.  Once they arrived safely in the United States in 1940, they received a publishing contract, and later changed the name of the book series to “The Adventures of Curious George.”

Local philanthropist Nancy Kranzberg, who has a show on KDHX radio and is a board member of the Mid-America Arts Alliance, played a huge role in getting the Rey exhibition to Chesterfield Arts.  “Nancy loves what we do here,” said Stacey Morse, executive director of Chesterfield Arts.  “She saw this as an opportunity to bring a traveling exhibit to Chesterfield, something we haven’t done before.”

The exhibit includes 27 framed prints by artist Allan Drummond that illustrate the authors’ journey from France to the U.S.  Using watercolor and ink as his medium, Drummond begins the exhibit with a large map that depicts the entire expedition.  The prints that follow show specific aspects of the journey, such as enemy planes flying over France, seeing articles about Hitler at the train station or Margret and H.A. Rey riding their bikes to escape Paris.

The prints also show how the authors began writing the iconic series “Curious George.” Images of the monkey show up often in the exhibit, which help explain the Reys’ creative collaboration and how the story of “Curious George” was born during the wartime period.

This specific exhibit resonated with Chesterfield Arts not just because of its compelling story, but also because of the literary component.  Chesterfield Arts has a literary program that educates kids and is used in classes offered at the gallery.  “We saw this exhibit in particular as pulling all these components together,” Morse said.

The “Curious George” theme makes the story good for all ages, despite the heady message of its authors escaping hate and religious persecution.  Chesterfield Arts will take it a step further during the July 12th opening reception, when it will have Curious George cutouts to take pictures with, an activity guide that takes attendees through the exhibit and hopefully the “Curious George” books on sale, all of which will make the event more kid-friendly.

While displaying the exhibit, Chesterfield Arts also hopes to gather the stories of how visitors coming to see the show got to America.  “Every family has their own story,” Morse said. “ We would like to collect those.” There will be a station set up during the opening reception where families can sit down and write their story together.  Each story will be collected and combined to create a freestanding sculpture that will be on display outside the gallery.

“A lot of the time people don’t know the background to pieces of artwork,” said Morse.  “This exhibit is a great way to share that story, introduce new information and inspire people.”