Contestants shed the pounds for ‘Lighten Up’ challenge 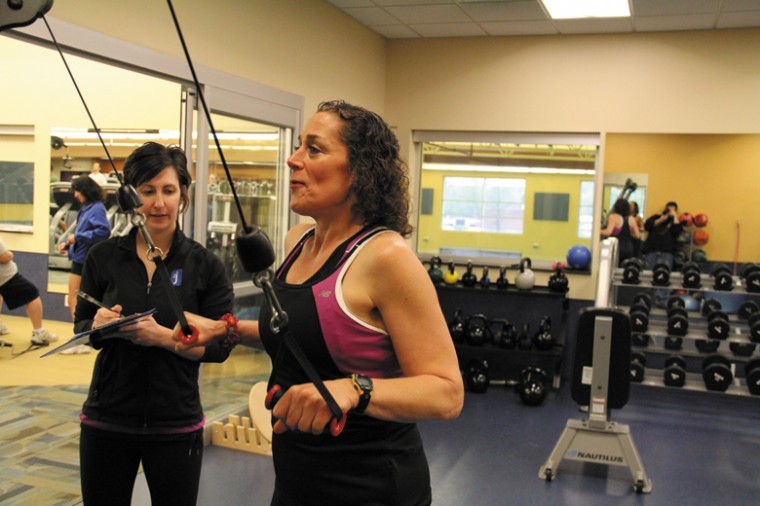 A whopping 1,889 pounds of fat have gone missing as a result of the second annual “Lighten Up Weight Loss Challenge,” an eight-week program sponsored by the St. Louis Jewish Light and the Jewish Community Center – and one family’s pride, enthusiasm and commitment to fitness resulted in a big win for them.

The Animaniacs team – consisting of Kathy Freet, her daughter Elizabeth, her sister Laura Meyer and her brother-in-law Bobby Meyer — claimed the top prize after losing a total of 128.8 pounds, or 14.74 percent of their total body weight. The Freets live in Ellisville; the Meyers live in Chesterfield.

“I knew we would keep each other encouraged and keep each other accountable,” said Bobby Meyer, 49. The four also kept each other company in the back row at Maurice Lewis’s spinning class at the J’s Marilyn Fox location, where the Meyers and the Freets are members. They won baseball tickets and a service package from the J.

Bobby Meyer lost more weight than Kilo, but Meyer was part of the winning team, so Kilo got the individual prize, which he also won last year. (Giving two individual prizes, one for a man and one for a woman, was new this year.) Koppel and Kilo won limousine service, restaurant gift certificates and service packages from the J.

Based on the popular television program “The Biggest Loser,” the competition began Jan. 17. Some 223 people took part. Katie Hughes, leader of the challenge and assistant fitness manager at the JCC, reported that last year, 198 participants collectively lost 1,421 pounds. “Everybody did a great job this year, with significantly more weight loss,” Hughes said. “And the Animaniacs were in first place all but one week of the challenge.”

Kathy Freet, 45, a registered nurse at St. Luke’s Hospital, lost 34 pounds in the “Lighten Up” challenge—and that was after dropping 100 pounds on her own. “I still had more to lose, and I was stuck,” said Freet. “I thought taking part would help me get going again, and it did. Our team worked out, we all did spin classes and we all went to Babler State Park to run the trails.”

Elizabeth Freet, 14, attends a Christian home-school program. She lost 21 pounds. “We all worked out almost every day. We changed our diets to stay away from a lot of carbs and fats, and we tried to eat about 1,200 calories each day,” Elizabeth said. “It was hard – but it was fun, too.”

Winning was wonderful, but Laura Meyer, 46, said she appreciates even more the family’s new relationship with the J. “We’ve been members for about 10 years, but I never went to any classes. I was stubborn about that,” said Meyer, a painter and wallpaper stripper. “When we watched people come out of Maurice’s spinning classes looking like they had been through major torture, we knew we had to get in there and just do it. And we did!”

By his own admission, Bobby Meyer, a sheet metal worker, has long been a yo-yo dieter, gaining and losing the same 30 pounds over and over. In the competition, he lost 48.5 pounds. In addition to the spinning classes, he took conditioning classes and Pilates. “I have decided I am not going to yo-yo any more,” said Meyer.

Kilo, senior director for product consultation at Express Scripts, sees the “Lighten Up” challenge as a chance to drop any weight gained over the holidays. “I worked out every day for at least an hour and twice a day on weekends,” he said. “I used the same elliptical machine every single day, and I tried to make good choices for food and beverages.”

A social worker for the Special School District, Koppel lost 20 pounds in “Lighten Up” last year. She kept it off until she started attending parties last fall, just prior to her wedding to Scott Gitel, a pharmaceutical sales representative. Koppel gained back about 10 pounds at those parties and on her honeymoon, so she was eager to get back on track.

“Being in shape is like having another job.  It’s time consuming, but it’s important,” said Koppel. A runner for 20 years and a J member for five, Koppel works out for an hour every day. “I am addicted to endorphins, but for me, it’s more about how I feel than how I look,” she said. “I like feeling good.”