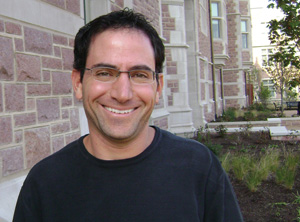 By Dan Durchholz, Special to the Light

Brian Cohen conceived of and created LouFest — a two-day music festival scheduled for next month in Forest Park — for one simple reason: It was the kind of concert he wanted to attend.

“Getting on a plane once a year to attend something like that is fine,” Cohen says. “But I missed being able to just jump on my bike and go to a festival in my back yard. That’s what I really wanted for St. Louis.”

“I had been in St. Louis long enough to know the right kinds of people – people who, if they couldn’t do it, they could tell me who could,” Cohen says. “The model I use for making documentaries is, first you come up with a good idea and then surround yourself with the best people that you can find to get it done. And that’s the model I’m using for LouFest.”

Among those people are Nick Barnes at Ironman Sound, the general contractor for the festival and Jeff Jarrett at Contemporary Productions, who booked the acts. Cohen also sought out Quench Inc., an “experiential event marketing” company, as well as others that would handle graphic design, the festival’s “Eco Zone,” food court and Kids Village.

“This is obviously a job that’s bigger than one person,” Cohen says. “So I had to find a team that was not only accomplished, but who had vision and were willing to look at a brand new event with no history or precedent and say, “OK, what are we going to create that’s new?”

Musically, LouFest features a mix of national and local acts, leaning heavily on indie rock, perhaps, but also spotlighting other genres. Among the most notable bookings are a solo set by Jeff Tweedy of Wilco (a Belleville native late of the area’s own Uncle Tupelo) and the St. Louis debut of She & Him, the indie-pop band featuring guitarist/vocalist M. Ward and singer/actress Zooey Deschanel.

“In terms of genres, we wanted to make sure we were reaching out to a number of different groups,” Cohen says. “But we didn’t try to be everything to everyone. When you do that, it becomes so diluted that you really don’t make anyone happy. My background is coming out of the indie music world, and I think Jeff is coming out of that similar place. So that became the majority of our lineup, but we made sure we included things for other people, too.”

But back to Cohen for a moment: He still considers himself a filmmaker first and foremost, though he admits that for now, “This has kind of taken over.” But he’s made some films that are certainly of note, including a public television series on the Jewish history of the South.

“We looked at Texas, Louisiana and Mississippi and the early history and the way the Jewish communities have developed and are continuing to sustain themselves today,” he says. “The first part of that series was ‘At Home on the Range: Jewish Life in Texas’ and the second installment ‘Pushcarts and Plantations: Jewish Life in Louisiana.'”

Cohen is from Abilene, Texas, and notes that conventional wisdom dictates that for your first film should always be about what you know. “That was my experience, that was where I came out of,” he says. “So it just seemed natural to explore that and make it understandable for others.”

The LouFest is a bolder step for him, but the prospects for it are looking bright.

“It was intimidating [going into this],” he says. “I didn’t go into it lightly. But I’m confident enough in the idea that St. Louis wants something like this and will support something like this that, if we do it right, we definitely have a chance to pull it off.”

Where: Central Field in Forest Park

How much: $38 for one day pass, $64 for two day pass and $300 for VIP pass, which includes seating on stage and food and drink coupons.