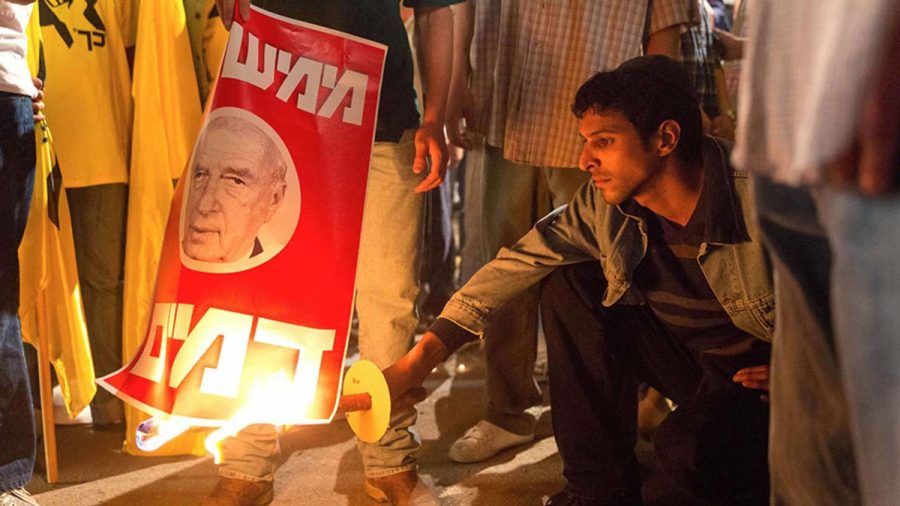 “Incitement,” director Yaron Zilberman’s gripping, fact-based political thriller, explores the life of a young Israeli man in the two years before he assassinated Israeli Prime Minister Yitzhak Rabin at a rally in November 1995 celebrating the second Olso peace accord, ending progress toward a settlement with the Palestine Liberation Organization and altering the course of Israeli politics. As the title suggests, Zilberman explores the role of others in inciting the far-right man to violence.

The film, an angry, harrowing thriller that earned the Israeli equivalent of an Oscar for best film and several other awards, has sparked controversy in Israel despite its accolades.

The story begins in 1993, after Rabin and Palestinian leader Yasser Arafat signed a declaration of principles since known as the Oslo I Accord. The agreement was celebrated by many in Israel as the beginning of a solution to the intractable Israeli-Palestinian conflict. But there was also opposition in Israel, from extremists on both the Israeli and Palestinian sides.

Young Yigal Amir (Yehuda Nahari Halevi) was already on the far right among conservative Israelis when the framework for a peace deal was announced Sept. 13, 1993. His Orthodox family generally shared his conservative views, particularly his mother, although they may not have shared the degree to which politics occupied his daily thoughts. Amir was attending law school, had a bright future and was thinking of getting married when he began obsessing over the Olso I Accord.

In Zilberman’s telling, Amir was already politically active but was further radicalized — incited — intentionally or unintentionally by older voices around him. One of those voices was his mother, who railed against the Rabin government without being aware of how it affected her son. Others may not have been so unaware, including activist leaders and rabbis whose fiery rhetoric stirred passions at protests and, in the case of Amir, much darker plans.

Halevi’s intense, outstanding performance is one of the most terrifying aspects of this powerful film, one that can be difficult to watch. Zilberman injects a pulsing tension throughout his finely crafted, tightly edited film, putting us on an emotional roller coaster as we follow Amir’s transformation and descent. The film clearly conveys an underlying sense of anger at the older leaders who helped whip up this young man.

Zilberman uses our discomfort to make a critical point about how violent extremists are born. Early on, Amir attends rallies opposing the peace accord. At one, when it turns violent, he seems on the verge of joining in when a policeman starts to arrest him. Amir begs to be let go, pleading that it will ruin his career as a law student and that his fiancee will dump him if she finds out. The emotional plea works, and the policeman lets him go.

It is true that Amir is studying law, but he exaggerates his romantic situation. He and Nava (Daniella Kertesz) are discussing marriage, but no wedding is in the offing. There is a family complication, as Nava is an Ashkenazi Jew, while his family are Sephardic Jews from Yemen. There are hints of prejudice against the Sephardi in Israeli society generally, and Amir’s mother is filled with resentment toward the Ashkenazim Jewish majority who dominate Israeli society. She cautions her son that Nava’s Eastern European-derived family will never accept him, reinforcing his sense of being an outsider.

However, the incitement of the title comes more from the heated political climate and the incendiary speeches of far-right rabbis and other leaders than it does from Amir’s personal life.

When Amir and his more radical friends begin to talk about assassination, he seeks moral approval from like-minded extreme-right rabbis. Some are willing to provide that needed rationale, although the arguments are phrased indirectly and the rabbis may not be aware Amir is a powder keg and they are acting as a match.

Nahari’s performance is stunning as we watch his Amir become increasingly unmoored from his more mainstream friends and life, drawn in by speeches of extremist leaders and rabbis.

“Incitement” is a cautionary tale on the making of an assassin and a lesson in the toxic power of incendiary rhetoric.

The real Yigal Amir is serving a life sentence for murder.