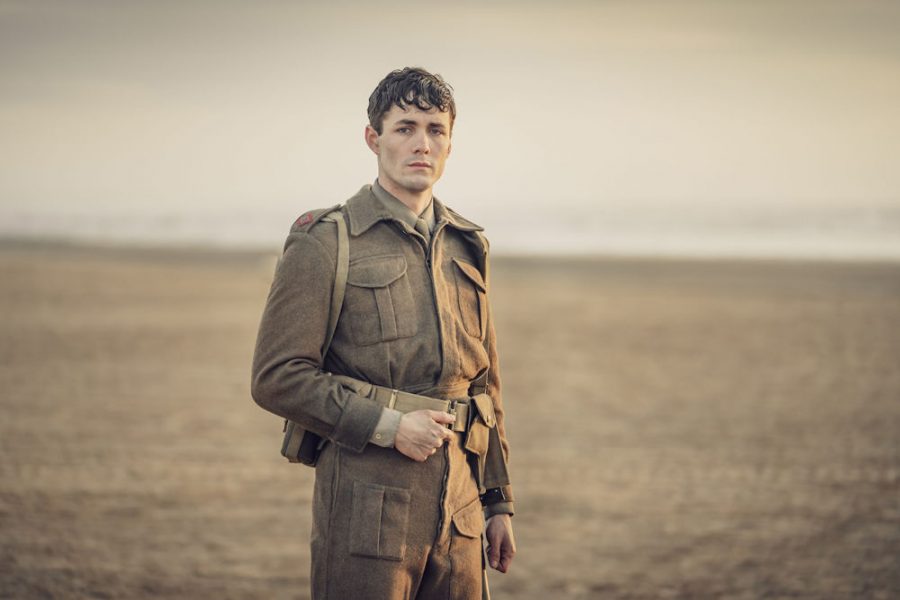 Jonah Hauer-King stars in “World on Fire” on PBS.

“A World on Fire,” a big budget, seven-episode BBC series began airing on PBS (Masterpiece Theater) on April 5 (catch the previously aired episodes easily online or in encore TV showings). It shows the effects of the first year (1939-40) of World War II on ordinary people in many European countries. Reviews are good, if not great. It did well enough in England that a second series has been ordered.

The very handsome JONAH HAUER-KING, 24, has a major role as Harry Chase, an interpreter at the British embassy in Warsaw who later becomes a British army officer who takes part in secret missions in Nazi-occupied Europe.

In December 2018, I wrote about Hauer-King when he starred in his first big film role (“A Dog’s Life”). Here’s a short recap—he was raised religiously Jewish in London; his American mother is Jewish (not sure about his English dad); and Hauer-King is a dual U.K./U.S. citizen. Here’s what’s new to me: I just learned that HAUER-KING can sing and last November was cast as a co-star (“Prince Eric”) in an upcoming Disney live-action musical film version of “The Little Mermaid.”

“A World on Fire” also stars Helen Hunt, who is a quarter Jewish (her paternal grandmother was Jewish). Hunt was the keynote speaker at the St. Louis Jewish Book Festival back in 2009.

“The Baker and the Beauty” premiered on ABC (9 p.m.) on Monday, April 13. It is a romantic-comedy-musical series based on a hit Israeli series of the same name. It follows Daniel Garcia, who works in his family’s Miami bakery and does everything that his loving Cuban parents expect him to do. Shortly after breaking up with his girlfriend, he meets a superstar model and fashion mogul, and his life moves into the spotlight as the pair fall in love. The supporting cast includes DAN BUCATINSKY, 54. You almost certainly know him from scores of TV guest roles. His parents were born and raised in Argentina. Not known yet whether that is true of his character, too.

The FX drama/comedy series “Better Things,” now in its fourth season, has received many Emmy nominations. I finally had the time to (quarantine) binge watch it and you should, too. It’s really good. The four seasons mesh together in logical plot arcs. “Things” is semi-autobiographical based on the life of its star and co-creator PAMELA ADLON, 53, who plays Hollywood actress Sam Fox. She works steadily, but never lands a big star role. Like Sam, Adlon has been acting in films and TV shows since she was 12. Also like Sam, Adlon’s late father was a successful Jewish comedy writer and her mother is British. In real life, Adlon’s mother converted to Judaism and, in a recent interview, Adlon said her mother doesn’t like to be called a convert but rather thinks of herself as just plain Jewish. There are “clues” that Phyllis, Sam’s mother, is a convert to Judaism, too. In the second season we learned that Phyllis (who is much more acerbic than Adlon’s real mother) was disowned by her parents when she married a Jew. Finally, like Sam, Adlon is the mother of three daughters, who she raised with little help from her ex-husband.

All four seasons of “Better Things” are available on Hulu.

The series finale of the “re-boot” of “Will and Grace” will air on NBC on April 23 at 8 p.m. It will be preceded at 7:30 by a special featuring clips of the series’ most iconic and memorable moments. The final episode finds Grace (DEBRA MESSING, 51) about to give birth and Will about to leave New York City.

On Netflix, “Never Have I Ever,” a 10-episode comedy created and produced by Mindy Kaling, will be released on April 27. The show centers on Devi, a first-generation Indian American teen girl. ADAM SHAPIRO, 40-ish, appears in seven episodes as Mr. Shapiro, a schoolteacher. Shapiro has mostly been a stage actor. Newcomer JAREN LEWISON, 20, has a big supporting role as Ben, a classmate of Devi.