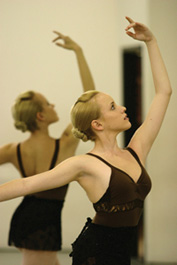 Weiner, originally from Huntington Beach, signed on with the company in October, and she is currently working on “Giselle, ” her third show with St. Louis Ballet, which takes place at the Edison Theater on the Washington University campus June 1-3.

Weiner said the transition to becoming a professional dancer has been “a huge jump. “

“Being part of a professional company, I’ve grown ten times what I was, ” Weiner said.

“Once you get to the professional level, it’s more about exploring the artistry and you get to really get into the roles, rather than a recital type of a role, ” she said.

Although Weiner has been dancing since she was three years old, she now spends a strenuous six days a week with the company, training, rehearsing, and taking classes with St. Louis Ballet Company Director Gen Horiuchi.

“Our days off are pretty much just recuperating from the rest of the week, ” Weiner said. “At that point, it’s just doing the laundry and trying to get some rest. “

But, Weiner said she has found a wonderful home with the company, making friends with her fellow dancers and learning from director Horiuchi.

“I love Gen. I have friends in other parts of the country that dance and they say, ‘Oh my director yells and screams so much,’ and that’s what I was expecting. But Gen is really approachable, and he cares a lot about his dancers, ” Weiner said.

Weiner said that ballet has many challenges, particularly physical ones. “I’ve had many injuries, whether it’s just working too hard or being dropped by a partner, ” Weiner said, noting that she once broke two ribs and sprained a wrist on a failed lift.

“In the present time, as far as body shape and size goes, there’s a lot more leeway, but there’s still the image that dancers need to be really slight and slim, ” Weiner said.

With “Giselle ” the Romantic period ballet by composer Adolphe Adam and choreographed by Jean Coralli and Jules Perrot, Weiner performs as the peasant couple, and one of the Wilis, the vengeful spirits of women who died with unrequited love.