Cache of Holocaust-era letters at heart of new art exhibition 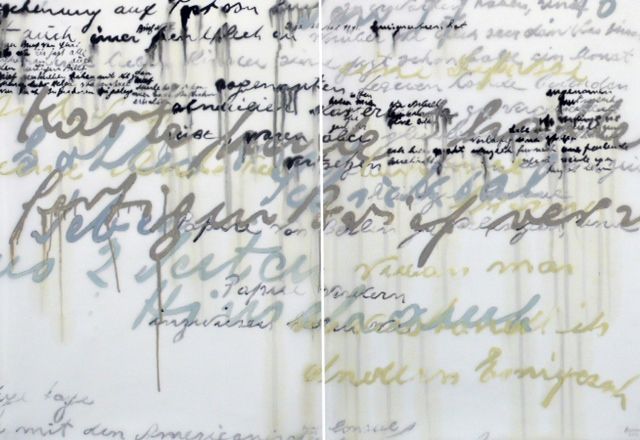 Printmaker Bunny Burson’s new exhibition raises many more questions than it can answer, so it’s appropriate that the title of the show is a question as well.

“Why is it?” is based on the artist’s family history. In 2009 she found dozens of letters from her grandparents to her mother, their daughter, in the United States. The letters had been in Burson’s mother’s attic for more than 50 years. Burson’s grandparents sent their children to America on the day of Kristallnacht; between 1939 and 1941, when they wrote the letters, they tried to escape first from Germany and then from Latvia. They did not make it out of Europe, and Burson’s mother never discussed this with her daughter.

All 12 pieces in the show display reproduced handwritten passages from the letters in different media, such as monoprints and embossment. When an artist friend of mine saw the show she said, “The art gives a whole different meaning to how beautiful words can be.” Indeed, the beauty of the handwritten words and their authors’ urgency impact all viewers, even those who don’t know German.

Burson visualizes this urgency in a poignant piece titled “In Plain Sight,” a series of aluminum and brass reproductions of envelopes which held the letters. The artist hand wrote the addresses and even copied the air mail stamps. The many envelopes evoke unresolved desperation, and the medium of metal imbues these items with heft and lasting power.

A deceptively weighty print, the 23-by-26-inch “By Hand” features a handwritten passage embossed in the paper. Though its pure whiteness conveys purity and lightness, the words themselves possess such weight and solidity that they press into the paper.

The play of buoyancy and density is also found in the diptych “Untitled 50,” which presents a handwritten passage on two 36-by-50-inch sheets of white vellum. To write the words, Burson used earth-toned inks such as green, brown, yellow, and black, which turn the translucent vellum opaque.  The wet ink ran as it dried, the drips implying sadness, mourning or loss.  The two sheets of paper in this piece were joined at one time; letters at the edges look to have been connected. The papers are now separated by frames and space, suggesting the separation between Burson and her grandparents, and between her grandparents and freedom.

Freedom brings us back to the title of the show, part of a series of implied questions Burson asks about the fate of her grandparents.  Why did this happen to them?  Why couldn’t they get to freedom and safety?  Why is it so?

Sarah Weinman earned a master’s degree in art history at the University of Illinois at Urbana-Champaign. She loves to plan trips and travel.  In her spare time she enjoys photography and writing, and she belongs to a weekly writers’ group. Her blog looks at visual arts in St. Louis, featuring whenever possible Jewish artists or themes.