Bringing ‘Asher Lev’ to the stage 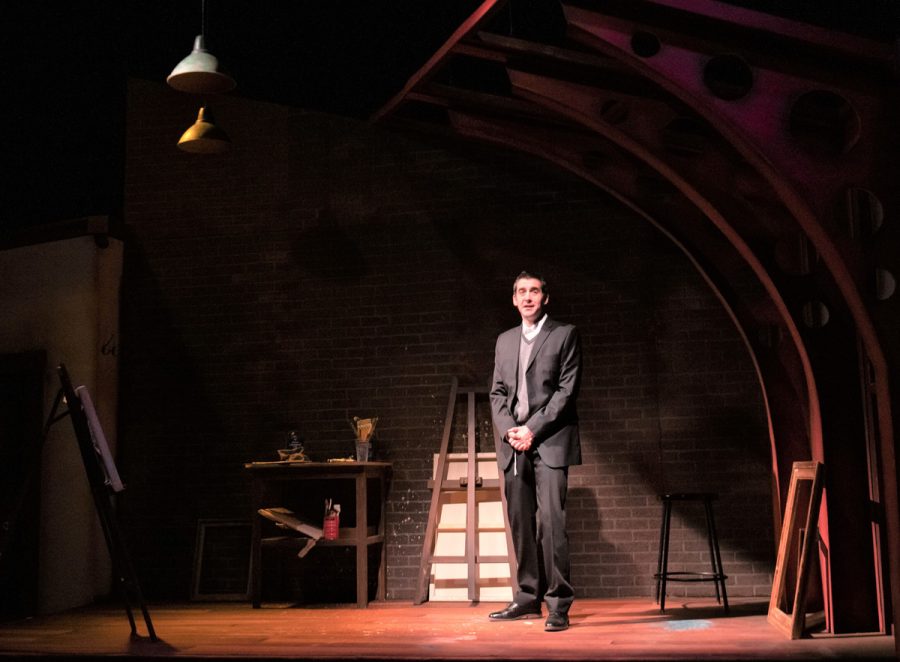 By Judith Newmark, Special to the Jewish Light

“Hamilton” creator Lin-Manuel Miranda has said he loved “My Name Is Asher Lev.” The novel’s author, Chaim Potok, heard similar reactions from readers in India – in fact, from readers all over the world.

Neither the Latinx theater artist nor the readers in South Asia nor most of the other people who have embraced the novel have any obvious connection to the book’s title character. But a lot of people seem to identify with Asher Lev, a brilliant young painter from a Hasidic family whose work brings him both acclaim and scorn.

Aaron Posner, whose stage adaptation of the novel runs at the New Jewish Theatre through Feb. 9, relates those reactions without surprise.

“One man told me that ‘Asher Lev’ saved his life. Others have said it tells their own story. Many, many people, all over the world, felt radically affirmed when they read ‘Asher Lev,’” Posner said. “And Jewish readers loved it.

“Chaim wasn’t a stylist, wasn’t interested in literary pyrotechnics. He told stories he wanted to share broadly. This is a very human story, very accessible.”

The accessibility is implicit in the title, adds Aaron Sparks, director of the NJT production.

“That line – ‘My name is Asher Lev’ – that’s something the character says several times (in the book),” observed Sparks. “It’s a statement of identity.

“But who gets to say what identity is? Who is Asher as a creative artist? Who is he as a Jew?

“And what does it mean to take ownership of all the parts of yourself?”

Both the playwright and the director suspect that’s a question nearly everyone must come to terms with – artist or not, Jewish or not.

Still, the novel is a novel for a reason. “It’s a 400-page book,” said Sparks, the son of Bob and Zelda Sparks (she’s the Jewish Community Center’s director of cultural arts). A graduate of Parkway North and New York University, he and his wife, Natalie Blackman, recently relocated from New York, where both worked in theater. Now they live in Austin, where he’s studying for his MFA at the University of Texas and she’s joined the theater faculty.

“You cannot get 400 pages into a play. So Aaron Posner did the things you have to do,” said Sparks. “He pared it down to its essential themes.”

He pared it hard. Only three actors appear in the drama. Here, Spencer Sickmann plays Asher throughout the play, at different ages. Amy Loui plays all the female characters, and Chuck Winning plays all the male ones.

Posner calls it “a one-man show with more people in it.” He employed a similar, pared-down technique when he adapted Potok’s most famous novel, “The Chosen,” for the stage. That play sounds lavish by comparison: It calls for five actors.

“When I approached Chaim about ‘The Chosen,’ my idea was to simplify it, and he liked that a lot,” said Posner, who worked with Potok on that adaptation. Potok, a Conservative rabbi as well as a novelist, also looked forward to working with Posner on dramatizing “Asher Lev.”

But he died in 2002, before they had a chance to began. Posner was, however, able to work on the new play with Potok’s widow, Adena.

The Potoks were avid theater-goers, Posner says. He understands that: He and his wife, Erin Weaver, are very much involved in the theater scene in Washington, D.C., where they live. She’s an actor; he is a director as well as a playwright. (Last season, NJT presented his powerful adaptation of “The Merchant of Venice,” “District Merchants.”)

Posner recalls that he wanted to turn “Asher Lev” into a play as soon as he read it, a reaction that does not surprise Sparks. “Another of the story’s essential themes is the drive to create, which resonates with everyone in theater,” he said.

Of course, he said, it also has a special resonance for his peers, young adults setting out on life paths that may, or may not, be what their parents and community expected.

When it is not – as it certainly is not for Asher, who stuns both the art and Jewish worlds with a painting titled “Brooklyn Crucifixion” – that may provoke stress, anger, alienation. Aspiring artists, people who otherwise defy their parents’ career goals, people who love people their parents didn’t expect – many of Sparks’ peers relate to Asher Lev for reasons of their own, the director said.

Posner agrees. “It’s a common story: a person thinks, ‘I am so different, I must leave my family behind.’

“But can somebody bridge two worlds and live a worthwhile life?

“’Worthwhile’ – that was Chaim’s word. Now it is part of my lexicon, too.” Ideally, he says, it comes to describe the answer to the basic question of identity: Who am I?