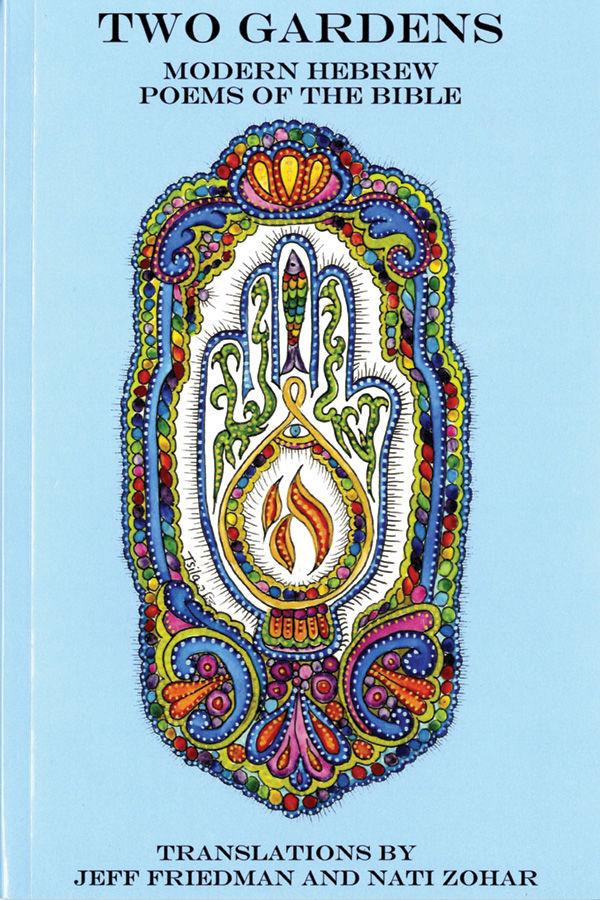 Two translators, Jeff Friedman, a well-known American poet, and Nati Zohar, a respected translator, have deployed their skills to bring together splendidly translated poems by some of Israel’s most prominent poets in a collection entitled “Two Gardens: Modern Hebrew Poems of the Bible” (Singing Bone Press, $15.95).

Among the poets included in this highly engaging collection is Yehuda Amichai, regarded as one of the most gifted Hebrew poets of the 20th century, whose work has been translated into 37 languages. Amichai, who died in 2000, received numerous awards, including the Israel Prize, which many consider his nation’s highest honor.

Amichai’s affecting poem “In a Beautiful Garden” evokes the unique loneliness and perplexity of the first humans:

A man sat in a beautiful garden,

half in light, half in memory.

His mother called him from a window of sleep,

but he wasn’t sleeping and couldn’t answer.

And he walked through the gate of the garden,

half himself, half someone else.

Now he remembers his first love,

but he’s never returned to the garden,

and he lives with pleasure and pain,

and if he’s not dead, he’s still making love.

Thus Amichai reinvigorates the familiar story of the first humans in the Garden of Eden, an earthly paradise in which they could have lived forever, free of pain, and ignorant of good and evil.

But they succumbed to the temptation of the forbidden fruit and are banished from the garden,

living “with pleasure and pain, and if he’s not dead, he’s still making love.”

Eve, the first woman, is not neglected in this collection.  T. Carmi describes her in the first stanza of “Eve Knew”:Eve knew what hid in the apple.

From the ribs of Adam

she oversaw the works of creation,

listening to the rustle of herbs and insects.

Eve knew what hid in the apple.

a flowing stream of plants,

with every living thing.

The reader gains an appreciation of the crucial role Eve played in the entire creative enterprise in Genesis and, in the end, Adam “saw that it was good.”

The role of the first couple’s first two sons, Cain and Abel, is highlighted in “Autobiography” by Dan Pagis, which is told from the perspective of Abel, the first murder victim (by his

I died with the first strike and was buried

under the rocks, where no one would find me.

The raven taught my parents about death,

told them what to do with me.

My family still has a good name – and not a little

because of me. My brother invented murder.

I invented the other silence.

Pagis’ poem conveys the horror Abel feels after being murdered by his own flesh and blood, and the agony of

Adam and Eve, who invented “the black garment, grief.”

how long will this battle

you are still wandering in the desert,

but you are not alone.

The same angel came to you

on your path through pain

as came to us on our road

If only we could hear each other,

as we heard in the voice of the angel.

Another moving poem included in this volume is “She Is Joseph” by Nurit Zarchi, which argues that Joseph was a woman. We are brought into the privacy of Rachel’s tent as she lovingly tends to her luminous child:

and presses it down under a silk cap

and chalks her face to roughen the skin

and calls her Joseph.

For she has no son

and her prayers are numbered

She must even lie to God

Rachel laments that her gorgeous daughter will evoke the rage of her brothers, “throw her into a pit and then sell

you into slavery,” that she will be sent to prison.

Zarchi closes with the poignant lines:

The little girl sits in the tent,

and her mother holds her hair

and calls her Joseph.

The above are only a few selections from “Two Gardens.” One can understand why poetry anthologies are best sellers in Israel,  with all-star practitioners such as these include in this inspired and inspirational collection.