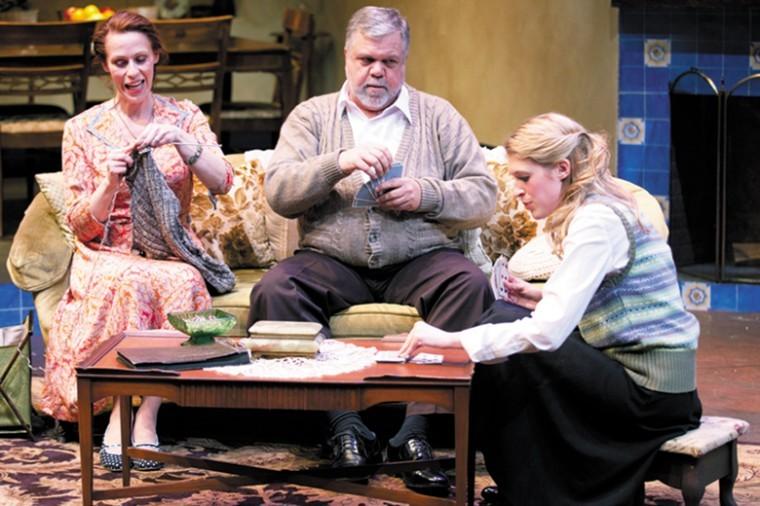 Fans of Alfred Uhry’s award-winning play and film “Driving Miss Daisy” are sure to love “The Last Night of Ballyhoo,” appearing through Dec. 18 at The New Jewish Theatre.

Though not as much of a household name as Neil Simon or Arthur Miller, Uhry is distinguished as the only American playwright to have won a Pulitzer Prize, an Academy Award and two Tony Awards. In both “Driving Miss Daisy” and “The Last Night of Ballyhoo,” Uhry proves he deserves these lofty prizes by combining serious drama and laugh-out-loud humor, against a backdrop of major historic events.

Where “Driving Miss Daisy” was set in Atlanta during the early 1960s in the midst of Martin Luther King’s civil rights activities, “The Last Night of Ballyhoo” is again set in the Georgia city, but the time is December 1939.

Adolf Hitler’s Nazi troops had invaded Poland four months earlier, plunging Europe into World War II and the Holocaust. But Atlanta’s elitist, assimilated German Reform Jews are more concerned about who is going to Ballyhoo, an annual social gathering for young Jewish 20-somethings from all over the South.

The Freitag family of “The Last Night of Ballyhoo” are also more distracted by the world premiere of “Gone With the Wind,” which is taking place in Atlanta that very Christmas season. Only the family patriarch, Adolph Freitag (performed by Greg Johnston), the unmarried, solid merchant who runs the family business, expresses any worries about the war in Europe. “This Hitler business in Poland. Ain’t gonna turn out good,” he says, while looking up from his copy of the Atlanta Journal-Constitution.

Johnston is spot-on perfect in the role as Freitag, the glue that holds the family together, running the Dixie Bedding Company close to his vest, and armoring himself against the foolishness of his household by feasting on candy, cake and noodle soup and dozing off when he wants some peace and quiet.

Gary Wayne Barker skillfully directs the fine cast, which also includes Peggy Billo as Adolph’s widowed sister, Beulah (Boo) Levy, and Laurie McConnell, as their also widowed sister-in-law Reba Freitag; Alexandra Woodruff as Reba’s bright daughter Sunny, in for the holidays from Wellesley, and Rachel Fenton as Boo’s unsettled, overly anxious daughter Lala Levy. Solid and credible performances are also delivered by Adam Moskal as Joe Farkas, a Brooklyn-born Jewish man in his 20s who is attracted to Sunny, and Dylan Duke, as Peachy Weil, the well-born German Jewish boy who the controlling Boo focuses on as the ideal Ballyhoo date for Lala.

As the living room drama unfolds in its two brisk and well-written acts, nearly every aspect of the play is affected by the once-serious split that existed for much of the first half of the 20th century between German and other West European Jews who arrived in the United States starting in the 1840s, and the millions of Russian and other East European Jews who came to the “Goldene Medina” of America from the 1880s until immigration was restricted in the early 1920s.

That split, which seems quaint nowadays, was at one time a very serious line of demarcation between the largely Reform and considerably acculturated German Jews and their “poor cousins” from Russia and Poland. In Atlanta, the snooty Standard Club, the venue for the Ballyhoo event in 1939, served the “Our Crowd” German Jews, while the Progressive Club served mostly Russian-descended Jews. Many of the play’s references to the ways in which the German Jews of Atlanta behaved is shown humorously, from the very first scene, in which the living room is dominated by a large Christmas tree.

When Lala attaches a star to the top of the tree, Boo admonishes her that “Jewish Christmas trees” don’t have stars, because that represents the “birth of the Messiah” in which Jews do not believe.

The Freitag-Levy household is largely clueless as to how shallow their Jewish identity is until the arrival of Joe Farkas, the young Brooklyn Jew with a pronounced New York accent, who is hired by Adolph to work for the Dixie Bedding Company.

Uhry’s unique skills as a playwright, combined with his first-hand knowledge of growing up Jewish in Atlanta where he was born in 1936, are combined with the directorial skills of Barker and the top tier cast, for a wonderful theatrical experience. All in all, the New Jewish Theatre has selected an ideal show for this holiday season.

WHAT: ‘The Last Night of Ballyhoo’ a play by Alfred Uhry

MORE INFO: To order tickets, or for more information, call 314-442-3283 or visit newjewishtheatre.org.