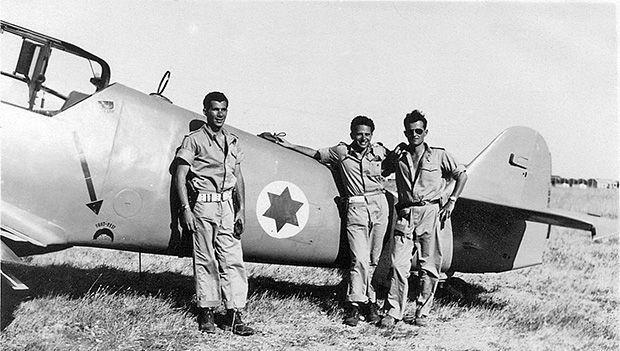 Archival photo from the documentary, ‘Above & Beyond’:  Fighter pilots Lou Lenart, Gideon Lichtman, and Modi Alonis in Israel in 1948.

“Above and Beyond: The Birth of the Israeli Air Force” is a fascinating, 90-minute documentary that can make the most critical skeptic of Israel fall in love with the Jewish State.

Directed with suspense-thriller precision by Roberta Grossman and produced by Nancy Spielberg (Steven’s daughter), this power-pace film goes all the way back to Israel’s War of Independence, from the period just before David Ben-Gurion, Israel’s first prime minister, issued the Jewish State’s Proclamation of Independence on May 14, 1948, until the armistice in 1949.

A little known story about the early days of Israel is the crucial role played by Jewish (and non-Jewish) GIs, veterans of World War II air combat services, who volunteered to help train Israeli fighter pilots and to embark on life-threatening flights of their own.

There are a lot of talking heads — historians, scholars and statesmen — but all are informative and help move the narrative along. What sets apart “Above and Beyond” from most such documentaries are the interviews of many of the pilots whose swagger and derring-do inspired the Israeli pilots as they built their air force from scratch.

In the words of two of the American Jewish pilots, Lou Lenart and Coleman Goldstein, on May 2, 1948, the soon-to-be declared Jewish State had no real air force at all, save for “just a few small Piper Cubs, with no life rafts or on-board radio,” which were flown to Israel from Europe.

The day after Israel declared its independence, five Arab armies invaded, promising their leaders and countrymen that they would quickly destroy the Jewish State.

The United States and Great Britain clamped an arms embargo on Israel. The only major country willing to sell arms, including aircraft, to Israel was Czechoslovakia, which had a supply of the Messerschmidt German fighter planes, which Israel eagerly purchased.

One of the Jewish World War II veterans who flew one of the Messerschmidts was struck by the irony of American Jewish soldiers wearing German airman uniforms and flying German fighter planes in defense of a Jewish State.

The Jews who volunteered to help create and then take part in combat missions for Israel were a mixed group, some from homes with traditional Jewish upbringing and others who rebelled against going to synagogue. But the newsreels of the Jews being liberated from Nazi death camps and later confined to the Displaced Persons Camps motivated the American pilots, along with others from Canada, South Africa and elsewhere.

Egyptian forces were massed in El Arish, poised to attack Tel Aviv, which “would have meant the end of Israel,” one of the pilots says. A daring mission, with pilots who had less than an hour to train on the unfamiliar planes, succeeded in causing the Egyptians to scatter and ultimately pull back.

“Above and Beyond” captures the essence of what Israel was -— and is — all about. The American Jewish pilots in some cases wanted to “prove that Jews could fight” and did not want to witness fellow Jews as victims.  They bonded with their Israeli counterparts as they helped build Israel’s air force with chicken wire and spare parts.

The film has wonderful footage of some of the GIs in their down time, enjoying time with pretty girls in the bars and nightclubs. In some ways, “Above and Beyond” is like a real-life Jewish-Israeli version of “Top Gun.”

What a pleasure it is to see an unapologetically positive film about Israel that can be enjoyed and admired by all generations.

‘Above and Beyond: The Birth of the Israeli Air Force’