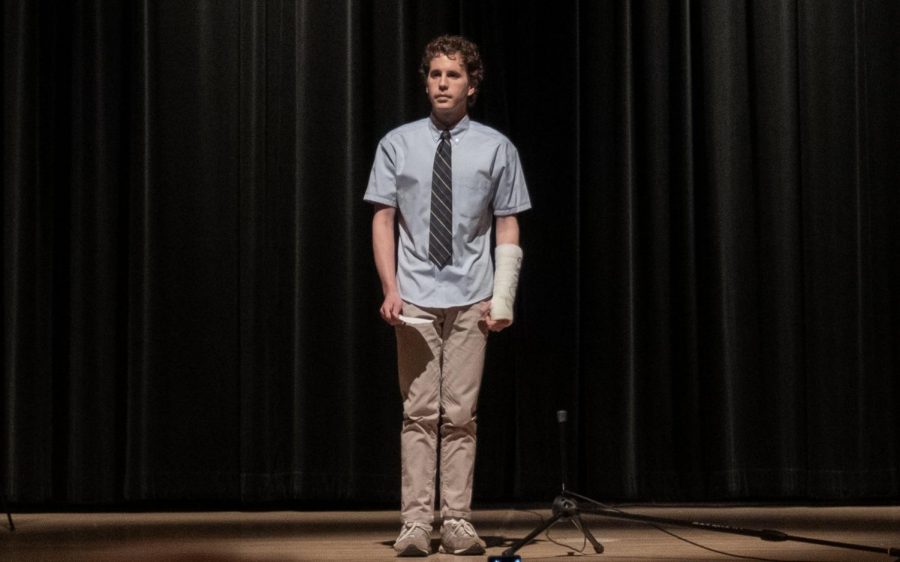 Ninety-five percent of movies manipulate the viewer. At some point, the story and acting are twisted or presented in a manner that is supposed to grab your emotions, or evoke some memory. There’s a moment that just seems like a huge reach. The key is not allowing the manipulation to be so blatant, that it deters from the overall message and execution of the film. Instead of provoking thought, it just triggers anger and displacement.

“Dear Evan Hansen” has a lot of these moments. A movie (based on the play of the same name) that dives headfirst into a tricky subject matter comes off as more messy than respectful–and way too busy.

What most likely worked on the stage-where Tony awards were won and the musical gained notoriety across the country-simply doesn’t work on the cinema platform. Evan Hansen (Ben Platt) is the outcast in his school, a high school senior awaiting any sort of connection from a fellow student, possibly even the girl he has the longest of eyes for in Zoe Murphy (the great Kaitlyn Dever). A repressed soul with enough built-up anxiety for three students, Evan writes himself motivational letters, ones that include fleeting thoughts about Zoe.

The connection that Evan does eventually acquire is a tense yet open-ended interaction with Zoe’s brother, Connor (Colton Ryan). A fellow black sheep himself, Connor gets a hold of one of Evan’s letters, and it leads to a tragedy that sparks the rest of the movie.

That’s all I will tell you about the central plot. What I will tell you is that the biggest flaw in this movie is the decision to let Platt, a 27-year-old Jewish actor with enough makeup here to make him look 34, play a high school senior. Unlike Tom Holland, who eternally looks 18, Platt sticks out like a sore thumb in his portrayal of a role he won several awards for playing on the stage, that the rest of the movie seems like one giant effort to offset the distraction that Platt’s performance gives the story. On a stage, it may have worked well. On a big screen for two hours and 17 minutes, it’s draining.

The second flaw in the ointment here is the runtime. “Dear Evan Hansen” should have written a letter to its editor, Ann McCabe, asking her to do a better job. That way, a few more friends in the audience would have been acquired. What I will never understand about modern cinema is the need for seemingly 80% of new movies to be over two hours long. The minute you mention 150 minutes long, people are jumping out of the parachute.

It only gets worse when the script is a mixed bag of singing and preaching, combined with another lecture on social media’s dominating presence. Steven Levenson, who wrote the stage play, adapted his work for the big screen and it’s not a good piece of work. Handling touchy minefields like suicide and teen depression doesn’t exactly get brightened up by a barrage of singing, followed by insincere character beats that only exist to manipulate the viewer even more. Evan becomes close with Zoe and her family, including Connor’s parents, played by Amy Adams and Danny Pino. Evan’s mom (Julianne Moore) is essentially shoved to the side of the story, which gives the esteemed actress odd moments of confusion–as if she doesn’t know what’s happening. Neither do we, Ms. Moore.

It’s not all bad. When the singing pipes down, there are meaningful — if fleeting — scenes where the heart of the matter is broken down and presented to the audience in a thought-provoking manner. With no offense to the music writers, Justin Paul and Benji Pasek, the good parts of the movie are quiet and make a small impact. And then a character starts singing as she posts a haunting letter on Instagram, and the sincerity of the moral drops to the floor.

Some stories make for good books only. Others translate better on a stage. Most of them shouldn’t become movies, because the medium just isn’t cut out for it. Also, don’t let the older actor try to portray a guy ten years younger than him. A certain caliber of actor can make it work, but not Platt.

I would bypass Stephen Chbosky’s latest directorial effort and go watch his other much better film, “Perks of Being a Wallflower.” A movie that poignantly captures the trials and tribulations of teenage angst and trauma.

‘Dear Evan Hansen’ opened today *in theaters only* across the St. Louis region, but my advice would be to skip it.